As the sports editor for The Flat Hat at the College of William and Mary, my tenure this past year has been a touch dismaying. I mean sure, I have had the chance to cover the men’s swimming team being the Colonial Athletic Association champions, and my esteemed colleagues in the section have followed the highly decorated cross-country and the perennially-strong field hockey team. Heck, in spite of a tense and ultimately unfruitful season, I still enjoyed every men’s soccer game I went to and had the privilege of covering.

So, why am I sitting emotionally at the sports desk in the Campus Center basement, writing this article? Tribe Athletics, outside of these very clear outliers, has been very lackluster. Maybe the issue is that we pay too much attention to “cash cows” that really aren’t producing that two percent milk that we’re all looking for — not me though, I’m lactose intolerant.

Yes, “American football,” I am very clearly looking at you.

Before I go on my diatribe — or dare I say it: manifesto — about why we should absolutely “cancel” football’s dominant place in our culture, or the very least as a college, know that I respect our players. They work really hard and already have numerous bodily injuries to worry about in their lifetimes. But let’s face the facts, any little freshman with a calculator who’s spent a day in an economics class knows that the cost-benefit analysis just isn’t adding up in the football team’s favor. Or maybe they don’t pay enough attention in class.

The apathy of current students toward the “Friday Night Lights” experience is very well documented. In fact, it seems like sometimes the only people who actually go to the games are my writers and alumni with tribal feathers coming to relive their glory days. Questionably offensive apparel aside, students would rather immerse themselves in the Crim Dell than in the third down bell.

So, what can Tribe Athletics spend our tuition money on instead? The short answer is literally anything else.

For starters, our field hockey team is kind of great. As of Dec. 1 however, their game facility had no bathroom, no concessions, no covered area, a failing speaker system — and the project to rectify this is mostly coming straight from a $2.4 million donation. Compare this to a $20 million renovation of the football field, seeded from donor money. Even the field hockey uniforms had to come from out of pocket. Yes, you read this correctly.

In my vast imagination, I can only infer that if the football team needed new uniforms, then people would fight over who would have the privilege of paying for it.

Likewise, perhaps Tribe Athletics would be better off using some of the money to fund varsity sports that could pique the interest of students better. I don’t exactly have the power of divination necessary to scry into the future. However, I can recognize trends at other universities in the region.

One big thing surprised me when I arrived in Williamsburg. I had this stereotypical vision of East Coast life and I had this image of prep-school educated rich white guys, donning their Vineyard Vines collegiate Shep Shirts carrying their lacrosse sticks everywhere. So where are these elusive lax bros? Literally everywhere else. They are at Virginia, Johns Hopkins, Duke, Richmond and Marist. Funnily enough, these are colleges that the Tribe regularly competes against… except in men’s lacrosse. Yes, I know it’s not ideal to have another “toxically masculine” sports culture at the College, but men’s lacrosse does deserve to be given a fair shake regardless of its demographic makeup. At least we have a women’s team to represent the College in this milieu — and we should be grateful, because they have actually brought honor to this College. I have a feeling, that given how popular this sport is in the mid-Atlantic region that the College could attract some serious regionally grown talent that would bring the College some championships that aren’t just swim or cross-country related.

Likewise, I could make similar arguments about the possible inclusion of varsity softball, crew or sailing teams. Softball is just plain fun to watch as well and apart from an obvious lack of venue, I imagine that the College’s potential softball squad would definitely be magnificent.

It’s time to face the music. The College is not a football school. We aren’t Virginia Tech, or Ohio State or Alabama. The sooner we get over our delusions of grandeur, the sooner we can move on and pretend that it never happened. Then maybe we could take care of football’s neglected siblings who deserve more of our attention. This of course, does not actually have to be at the “ultimate expense” of football, but it would be nice to see more widespread support of other athletic programs at the College.

However, I could also argue that the College paying for Disney+ for every single student would be a better investment — because people would at least be entertained. High School Musical? Troy Bolton got buckets. Tribe Athletics? Not so much.

Correction: A previous version of this article states that funding from Tribe Athletics came from taxpayer and tuition money. Funding is, in fact, derived from tuition collected from students, but not the taxpayers of the Commonwealth of Virginia. Likewise, the $20 million renovation of Zable Stadium was seeded from donor money. 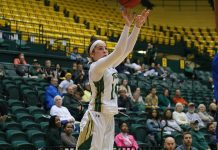