Home Variety Blogs Turkey: A Look Into Its Culture and History

Turkey is a beacon of both democracy and stability in the tumultuous Middle East; its social and political model successfully combines Islam and Western influences. Turkey is a Muslim country, a democracy, and it has a booming economy. It’s a state that spans two continents, and it’s a place with thousands of years of fascinating culture and history. I sat down with my friend, Evangeline Outzen ‘14, to talk about this important but little-known country. 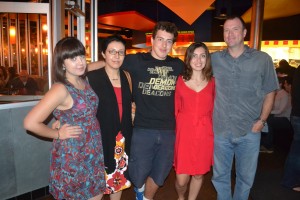 Outzen spoke with me about her experiences, her political opinions and the historical facts about the beautiful and unique country that is Turkey. Outzen is half Turkish and lived in Ankara, the capital of Turkey, from the ages of nine to eleven. She has been back to the country seven times, and has studied Turkish politics and foreign relations as an intern in Washington, DC. During her time in Turkey, she had the fortune to visit many amazing cities including, but not limited to: Istanbul, Izmir, Eskisehir, Antalya, Erzurum, Cappadocia and Kayseri. “Turkey is a large country – slightly bigger in geographic area than Texas – but I’ve been lucky to have traveled around a lot,” Outzen said.

On a more personal note, Outzen told me about some of her most memorable moments in Turkey. “When I was ten, my family took a trip to Cappadocia. That trip is especially impressed on my memory for a few reasons, including that it was probably the first time I began to seriously think about different religions, and how they interact with each other. One night, my family and I went to dinner and watched a performance of whirling dervishes – it was a profoundly peaceful and beautiful sight. The next day, we visited the Kaymakli underground city, which is an intricate series of tunnels and rooms built during the early years of the Roman Empire, when Christianity was an entirely new religion. Early Christians in Cappadocia built the city as a place to hide because Christianity wasn’t accepted at the time. I ran and climbed excitedly through the tunnels, trying to imagine what it was like for people not only to actually live there, but to live in fear and have to hide because of their religious beliefs. Also, the city of Cappadocia itself is made up of unusual geographic formations called “fairy chimneys’, which look like something out of a surrealist painting, so the entire place has a strangely serene atmosphere. It is a must-see for anyone who wants to travel to Turkey.”

In Turkey, a dish called ‘Dolma,’ which comes from the Turkish word ‘Dolmak,’ meaning to stuff, is very popular. “It consists of stuffed vegetables. You can use rice and meat to stuff tomatoes, bell peppers, zucchini and other vegetables. Stuffed grape leaves, called ‘yaprak dolmasi,’ are the most common iteration and can be found all across the Middle East,” said Evangeline. In Turkey, two drinks reign supreme: Turkish çay and Turkish coffee. “Turkish çay is drunk a few times a day and is often accompanied by biscuits or nuts. It’s more popular than the coffee because Turkish coffee is very strong,” she said. And of course, the ubiquitous Baklava is the most popular dessert in Turkey and the Middle East.

Outzen also enlightened me about the history of Turkey and how much Turkey has changed, including the effects to maintain a delicate balance between Islamic and Western ideals. “The Ottoman Empire – called the ‘Sick Man of Europe’ during the later years – began to seriously lag behind Europe technologically and struggled to maintain authority over the vast territory and numerous ethnic groups that were part of the empire. The Ottoman Empire had lasted for 600 years, but during World War I these various factors came to a head as the Ottomans fought on the losing side of the War with Germany. A man named Mustafa Kemal — later called Ataturk, father of the Turks — emerged as the leader of the Turkish nationalists. He would help establish the Turkish Republic in 1923. Seeking to Westernize and modernize Turkey, he undertook various social, political, economic, and other reforms from 1924 to 1934. He radically transformed the country to be oriented to Europe from the top down. For example, Ataturk replaced Arabic script with the Latin alphabet and removed a lot of Arabic and Farsi words from the Turkish language. Ataturk wanted Turks to think of Turkey as a European country, and for a long time they did. Today, the situation is a bit different. Although Turkey remains technically secular, the ruling Justice and Development Party, which has been in power for over a decade, is taking the country in a more Islamist direction. Seeing as Turkey’s population is 99.8 percent Muslim – most of them Sunni, although there are Shiites and Alevis too – it will be fascinating to observe how the way Turkey identifies itself changes,” Outzen said.

Our discussion shifted to politics as Outzen explained the European Union’s relationship with Turkey. Turkey first applied for EU membership over 50 years ago, and in 1963 the parties signed an association agreement stating that Turkey would “one day” become a member. In the 1970s, Turkey was offered membership but declined; Ankara was under a far left regime that did not want any part in the “capitalist club.” In 2005, the EU accession process became more complicated when the EU divided the requirements for membership into 35 chapters, which allowed for each chapter to be opened and closed with the consent of each of the 27 members. A few countries including Cyprus and France, strongly oppose Turkey’s membership. The process has effectively halted. “Personally, I think the EU has made a mistake by making it so difficult for Turkey to join. It used to be that Turkey needed the EU more than the EU needed Turkey, but now things have changed and Turkey is booming where Europe is stagnant. The failure of EU membership talks has helped contribute to a re-orientation of Turkey’s foreign policy eastward.”

Outzen on a more pensive note: “I think that Turkey has been neglected in public discourse and as a subject of study in American schools. It is unfortunate because Turkey is a rapidly growing economy with increasing geopolitical significance, but also because it is a beautiful country and culture. Turkey has been the crossroads of Eastern and Western civilization for thousands of years. It would behoove American policymakers to pay closer attention to Turkey, and on an individual level, it would also benefit Americans to study how and why [the] East and West have met successfully in Turkey.”