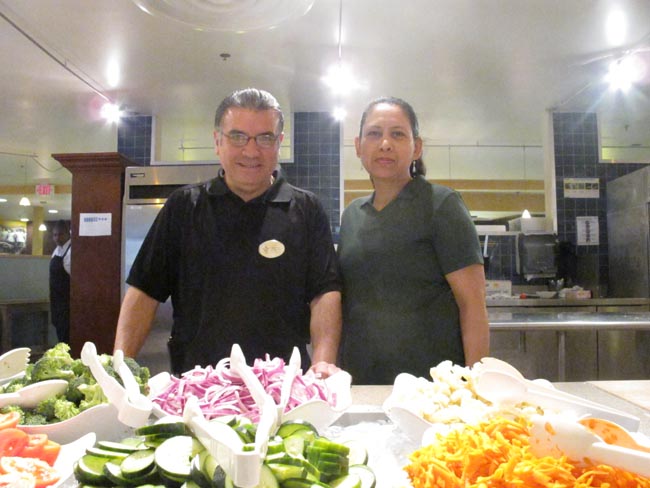 “We want to share our story with you,” Concepcion Pellecer said.

For a little over a year now, Pellecer and Manuel Cerrutti have been working for the College of William and Mary’s Dining Services in both the Sadler Center and the Commons Dining Hall. Throughout the semester, they would share encouraging sayings — especially during exam week — and help students practice their Spanish. Because they have recently become American citizens, they are excited to share anecdotes about their long journey to finally achieving citizenship, one of their many dreams. For them, the Sueño Americano, or the American Dream, is real.

Originally from Guatemala, Pellecer had wanted to come to the United States since she was 17 years old. She wanted to help her family by working in the United States and by sending money home to help remedy their poor economic situation. Her Guatemalan friends helped her find her first job with a paycheck of $40.

“I never had that kind of salary before,” she said.

But Pellecer did not leave her home only for economic reasons. Dangerous guerrillas roved Guatemala during the 1980s. Buses were set on fire, shops and homes were raided by the guerrilleros, and “matazones,” or killings, became part of everyday reality. Innocent people were murdered, and the police had no control over the spiraling situation. Pellecer recalled how her younger brother, who was in veterinary school, had to pick up the corpses that were left on the street.

“Once when he was out during late hours, he had to hide underneath the corpses to hide from kidnappers,” she said. Violence became part of daily life, but she kept dreaming.

Cerrutti left Peru at age 23 because of his father’s death and poor economic situation, but the guerrillas also played a factor in his decision to immigrate to the United States.
“Because of the guerrillas, there was a lot insecurity during that time,” Cerrutti said. “The economy in Peru was going down. Government help was mostly for rich people.”

A witness to the damage the guerrilleros did, Cerrutti recalls how bridges were blown up and how people, including his teenage brother, were kidnapped.

“These kidnappings were called ‘enboscados,’” he said. “People had to be alert.”

Although Pellecer and Cerrutti beat the odds and are now American citizens, their situation is bittersweet.

“There is a lot of family separation,” Pellecer said. “They deported my brother, and his daughter is living here with us, but [she] isn’t able to be with her father.”

The couple moved from Los Angeles to Georgia and finally to Williamsburg in order to raise their two nieces and to care for their grandmother. According to Cerrutti, the original plan was to stay in the United States for two years. For Pellecer, however, coming to the United States. was her dream.

“It was a paradise and now, thanks to God, I am a citizen,” she said.

The couple has more dreams they plan on fulfilling. Pellecer is currently taking English grammar classes with prospects of earning her GDE so that she can become a nurse. She loves working at the Sadler Center because of the students’ vibrancy, and hearing everyone solely speak English helps her master the language. Hope in the future is very much alive on campus.

Against the wishes of his children, Cerrutti plans to retire in Peru.

“The United States is their country now,” he said.

They hope their children will become professionals and have their own families with secure careers. They want to give their children what they did not have when they were back in their home countries.
Family life is vital for them, and they believe everyone should be able to enjoy it, even undocumented workers. Concerning the current immigration reform movement, Cerrutti thinks that the government should approve immigration reform that will allow the millions of undocumented workers to work “tranquilos,” or without fear of being deported or being separated from their families. The corruption and mafia-like pandilleros makes starting one’s business in Latin America challenging. He believes that it will be difficult to deport millions of people who want to work for their families. They trust that the government will do its best to protect families who are also working for the “sueño americano.”

For Pellecer and Cerrutti, the American Dream is real if one is patient, determined and hardworking.

“To reach it, it depends on the person,” Pellecer said.