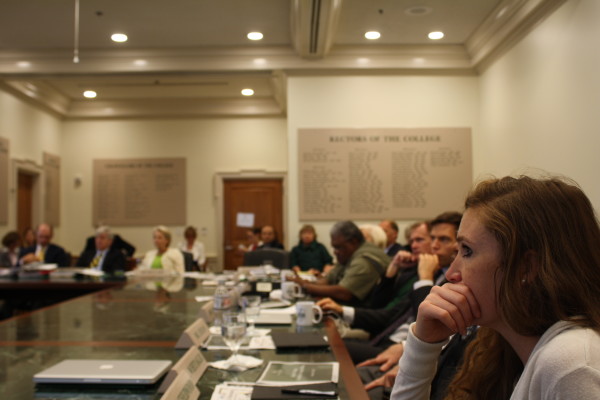 The Board of Visitors convened Thursday to hear the provost’s report and the faculty presentation by English and American studies professor Elizabeth Barnes.

Provost Michael Halleran discussed the College’s ranking in the US News and World Report, as the College tied for 34th of all national universities, one spot lower than last year. According to the ranking system, the weaknesses are financial and faculty resources and the College’s strengths were graduation and retention rates, alumni donations and competitive admissions.

Barnes delivered a presentation on the arguments for and against the use of trigger warnings in college classes. She defined a trigger warning as a “warning presented to the class, either verbally or on the syllabus, about potentially upsetting material for someone whose own personal experience could trigger painful memories, flashbacks, or panic attacks.”

“We encounter material we may not necessarily agree with all the time, but it’s our job as faculty to teach the problem, not avoid the problem,” Barnes said.

Trigger warnings are controversial because, according to Barnes, their use has grown beyond just protecting students from trauma to shielding them from discomfort. She cited the backlash against trigger warnings in a report the American Association of University Professors released August 2014.

“The AAUP issued this report because college campuses were beginning to make policy based on student demand,” Barnes said. “We encounter material we may not necessarily agree with all the time, but it’s our job as faculty to teach the problem, not avoid the problem.”

Barnes identified two consequences of using trigger warnings to prevent discomfort rather than trauma: allowing students to dictate class material and limiting faculty to teaching only the least offensive material.

She also discussed the positive aspects of trigger warnings in the classroom, such as respecting students’ mental health and giving students time to prepare themselves for disturbing material.

Psychology and neuroscience professor Christy Porter and English professor Melanie Dawson M.A. ‘90 also spoke about their personal experiences with trigger warnings in the classroom. Porter attested to their usefulness.

“[Giving a trigger warning] isn’t mollycoddling — this is giving [students] access to metacognition, self-awareness, it’s giving them … accountability for their own learning and independence in their choices,” Porter said.

“[Giving a trigger warning] isn’t mollycoddling — this is giving [students] access to metacognition, self-awareness, it’s giving them … accountability for their own learning and independence in their choices,” Porter said.

At the conclusion of the presentation, Barnes said that the lack of an official policy on trigger warnings at the College leaves the weighing of the advantages and disadvantages of up to the faculty.

“I’m happy that students feel empowered to tell us what they need,” Barnes said. “But we have to find a balance.”