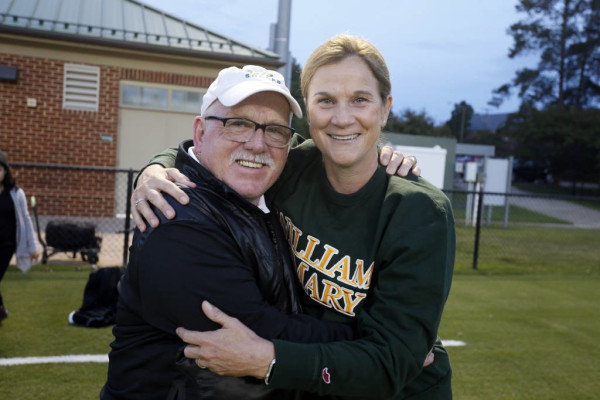 United States Women’s National Team head coach Jill Ellis ’88 has emphasized the importance of following one’s dreams since winning the 2015 Women’s World Cup this past summer. What she previously has not mentioned was the unusual way that dreams can evolve, and not always the way one expects.

Ellis was in town over Family Weekend to receive honors as Tribe Champion for Life during halftime at the family weekend football game. She said that she could not stay long, as she is already gearing up for a series of exhibition games and then Olympic trials. She described how she came to play soccer for the Tribe.

“I was more recruited out of high school for field hockey [than soccer],” Ellis said. “I grew up in England, and I didn’t play soccer in England. It wasn’t available for girls.”

Against the backdrop of a women’s soccer practice at Martin Family Stadium, Ellis’ non-soccer background seemed a bit of an anomaly among the soccer players present, many of whom earned athletic scholarships to the College. But as the saying goes, it’s not where you came from so much as where you finish; though to be honest, Ellis’ start is impressive as well.

“I was more recruited out of high school for field hockey [than soccer],”

Upon moving to the United States in 1981 from Portsmouth, United Kingdom, Ellis joined the soccer team at Robinson Secondary School in Fairfax, Virginia.

“I played on a very good high school team — I think we had five all-American soccer players on that team, so we were very good,” Ellis said. “I felt prepared [for the transition to collegiate athletics] as I had a lot of good coaches working with me.”

After leading her high school team to a state championship in 1984, Ellis went to the College. There, she was coached by head coach John Daly, who still holds his position at the College. When asked if she expected Daly to still be making the calls on the sideline, Ellis laughed.

“I did not, well, I did [expect him to still be coaching] in a way because I know he just bleeds green and gold,” Ellis said.

While at the College in the 1980s, Ellis helped guide the Tribe to four National Collegiate Athletic Association Tournament berths, the 1987 campaign ending in the Elite Eight. Ellis played forward and racked up 32 goals in her time on the pitch, adding 19 assists to place her in ninth place in the all-time career stats for points.

Ellis discussed the balance between her role as an athlete and her role as a student as the most difficult portion of her time at the College.

“I spent many, many hours in the bus with a flashlight and a book.”

“The student-athlete part was challenging,” Ellis said. “I spent many, many hours in the bus with a flashlight and a book. I think that [the student-athlete route] is more difficult and more challenging, but it’s also more rewarding. I’m very proud to have come out of here with more than just four years as an athlete but an education [as well].”

After graduating from William and Mary with a degree in English Literature and Composition, Ellis went on to North Carolina State in to complete her Master’s. She worked with the Wolfpack as an assistant coach.

“The coaching piece was just to pay for my education,” Ellis said. “My father was a coach and I really didn’t want to go into coaching. After N.C. State, I went into the business world as a technical writer, and I did fairly well. I got a call from April Heinrichs — she used to be an assistant here at William and Mary — [and] she said there’s this coaching job for 6,000 dollars a year, and I was closer to making 45,000 at the time. I remember calling my dad and he said ‘Go for it.’ My mom said, ‘Are you crazy?’ but it worked out for me. I reflected on it, and it was about following your passion and I knew at that point that I had a bug for coaching. I wanted to do it, and I wanted to make it my career.”

Ellis had several successful tours of collegiate coaching at Maryland, UCLA and Illinois University. Fourteen months after being hired as the national team head coach, Ellis was celebrating with the entire nation in the 5-2 victory in the finals over Japan.

“It was an amazing feeling and accomplishment, but, in truth, it’s the people that you go through the journey with that makes the difference,” Ellis said.

When asked if she was able to enjoy the victory, Ellis said she did take in the moment.

“It was an amazing feeling and accomplishment, but, in truth, it’s the people that you go through the journey with that makes the difference,

“When you’re in it, it’s head down and it’s a grind… but the feeling of pure elation at the end, that was worth every second,” Ellis said.

However, Ellis said that she is already looking to the future.

“We have a ten game victory tour, but as I said to the players at the front end, we’ll celebrate for a few games, but then we need to start using these dates as opportunities to see other players,” Ellis said. “We have four games in December, and it will be about looking at some players who we think can help us and gearing up for a big camp in January.”

Ellis said she is fully aware that she has inspired athletes and especially women athletes to pursue their dreams, as she is now on the forefront of the world of women’s sports with the Women’s World Cup title that the US hasn’t held since 1999.

“For so long we have not had a world cup, and now, to have a player who can see their own team win a world cup; I hope it’s a touchstone for players,” Ellis said.