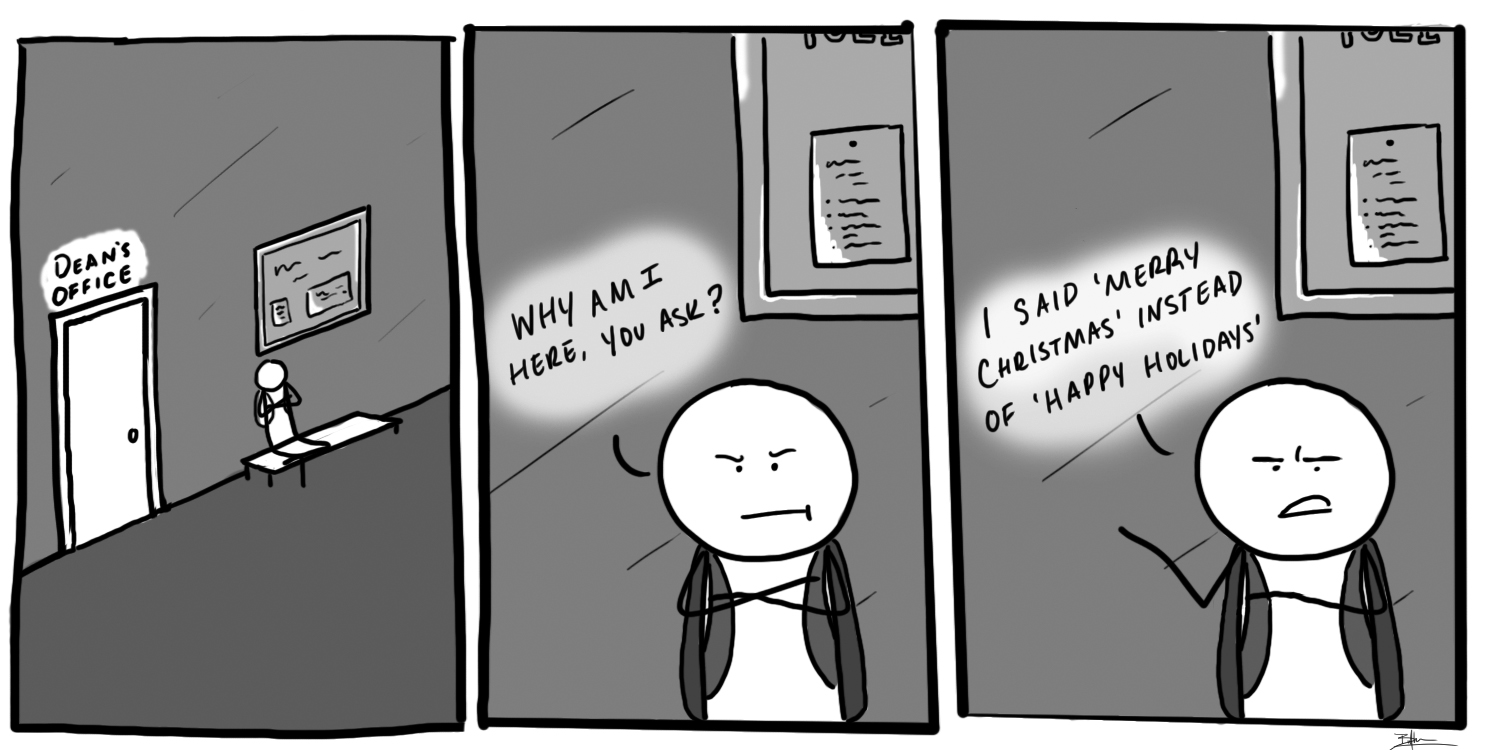 Let’s try to demystify “political correctness.” The phrase carries such hefty connotations that it can be hard to extract from it any meaning or usefulness. What does it mean to be politically correct? PC culture is made up of either social justice warriors or social justice advocates, depending on which side of the slope you occupy. It provokes polar reactions, signifying sniveling, self-righteous hypersensitivity or deliberate, respectful self-awareness.

“It’s used in a reactionary way to justify or cover up what some see as offensive speech.”

To a degree the term has lost meaning. “Political correctness” has split in two with no space left in the center. It’s used in a reactionary way to justify or cover up what some see as offensive speech. “Don’t be so PC,” someone might say in sneering pejorative after another criticizes his lazy joke about gay people. It’s also used to deflect or tear down opinions that fall outside of the realm of acceptability. When deployed, it can silence a conversation or turn it into a fruitless dual monologue. That’s counterproductive when the goal of criticism is to make people more aware of the impact of their words.

Is it possible to have sensitivity without the restriction of speech?

Finding a balance between the two extremes requires an awareness of your surroundings: who you’re talking to, how well you know them, their ability to respond, their relationship to a subject. It’s not necessarily the words themselves that are right or wrong; it’s the context in which they’re spoken. Speech happens in wildly various situations, and in each situation power is structured differently. What’s okay in a group of friends might be offensive in a group of strangers. The same idea applies across gradients of gender, race and class.

“Freedom of speech does not mean speech without consequences.”

Moreover, openness is not one-sided. Some who lament the loss of their First Amendment rights to political correctness also shut down criticism that comes their way. True openness permits criticism. Freedom of speech does not mean speech without consequences. Healthy dialogue comes with recognition of situations in which others may be unable to comment or object.

There’s a space between debauched chaos and total censorship. Sensitivity and openness don’t have to be mutually exclusive. Comedian Sarah Silverman takes a measured approach. She says she’s stopped using “gay” as a descriptor, but also that she’s also still willing to try out jokes on raunchy or taboo subjects. “[E]veryone’s going to be offended by something … but I do think it’s important, as a comedian, as a human, to change with the times,” she says. When approached with an appreciation for nuance and a respect for context, any subject can be discussed reasonably or even mined for humor.

“Political correctness, at least in the dogmatic sense used by Obama, is not the epidemic it’s made out to be.”

At a recent town hall meeting in Iowa, President Obama voiced his dissatisfaction over what he sees as the sheltering of generally liberal college campuses from contradictory opinions. At some schools, “They don’t want to have a guest speaker who is too conservative or they don’t want to read a book if it has language that is offensive to African-Americans,” he claimed. While I’m sure it’s partly accurate, his statement seems too wide of a generalization, even a little reactionary. Political correctness, at least in the dogmatic sense used by Obama, is not the epidemic it’s made out to be.

When Condoleeza Rice was announced as the College of William and Mary’s 2015 commencement speaker there were complaints from certain corners of campus. Rice is a conservative who served as Secretary of State for President Bush during the Iraq War. Her actions in office were grounds for protest for some. Citing Rice’s ultimately futile pursuit of WMDs in Iraq and the loss of life that resulted, a few students refrained from attending her speech. That’s okay. It’s not an overreaction; it’s a measured and deliberate protest of Rice’s policies in office, not of Rice’s ideology. There were some students who didn’t attend because of the speaker’s conservatism. That’s their right. Still, such automatic repudiation verges on close-mindedness.

Social justice is accomplished not by reflexive dismissal of opposing viewpoints, but through open engagement and honest (but sensitive) dialogue. And, you know, it’s good to be nice to people.