Home Variety Blogs ‘The Visit’ is a modest improvement for M. Night Shyamalan 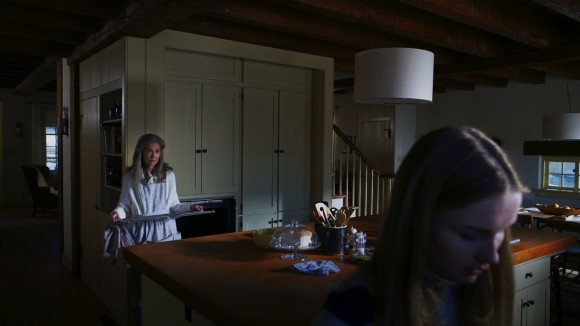 Night Shyamalan must have some deep-seated fears and insecurities when it comes to the elderly. As it turns out, so do many younger people.

In his new movie, “The Visit,” Shyamalan plays to these inhibitions. Paula Jamison (Kathryn Hahn) hasn’t seen her parents since the day she stormed out on them and ran off with her boyfriend. Now, several years later, her boyfriend has bailed on Paula and their two teenagers, Becca (Olivia DeJonge) and Tyler (Ed Oxenbould). Out of the blue, Paula’s parents have reached out and asked to meet Becca and Tyler. Tentatively, Paula has agreed to put the two on a train to rural Masonville, Pa. to stay with her estranged parents for a few days. Hence we have “The Visit”.

A commanding feature of the film is that we see the tale unfold “found-footage” style.

The grandparents are John and Doris Jamison, (Peter McRobbie and Deanna Dunagan), and at first, they come off as a caring and simple elderly couple looking to start a relationship with their grandchildren. They greet the kids at the train station and head out to their old farmhouse all set for a week of bonding. A commanding feature of the film is that we see the tale unfold “found-footage” style. Becca, while only 15, decides to shoot a documentary about the visit, hoping that the footage can provide some sort of healing “elixir” to her family situation.

Things start off well; however, it is as early as the first night that the kids get their first dose of elderly weirdness. Becca ventures out of her room past curfew seeking a late-night snack, but instead stumbles upon Doris pacing around beneath the staircase and vomiting ferociously. Things get stranger the next day when Tyler explores a shed only to discover a massive pile of soiled diapers. When the kids tentatively ask about these occurrences John dismisses Doris’ episode citing the flu, and simply that “she’s an old woman.” Doris covers for John’s collection of diapers telling Tyler that he has “incontinence” and is embarrassed about it.

Shyamalan does well playing with the audience’s feelings about old people. In general, we understand how they can sometimes be sickly, or strange in some way, albeit very warm and caring. The oddities of the story are believable enough within an old person stereotype right up until Shyamalan lays down his “twist” and all the eerie episodes make sense. Shyamalan utilizes the first-person view to increase suspense and makes the scenes feel more enclosed and claustrophobic. While “The Visit” is a vast improvement compared to Shyamalan’s notorious streak of bombs (including “The Happening,” “The Last Airbender” and “After Earth”), it still isn’t in the same ballpark as his earliest films due to the duo of ghastly teenagers played by DeJonge and Oxenbould and a weak supporting narrative.

Becca comes off as a hormonal dilettante and Tyler as a wannabe version of Soulja Boy, though he fancies himself more in the realm of Tyler the Creator. The fact that Becca finds it appropriate to make a documentary about first meeting her grandparents is ridiculous, and she extinguishes any likeability she has by saying things like, “Don’t touch it, let it swing naturally,” when recording a shot of a swing. Tyler is equally unpalatable with his self-proclaimed rapper name “T-Diamond Stylus” and nauseating rhymes.

These moments of true suspense and surprise are encouraging indications that Shyamalan may be returning to form.

Behind the sturdy horror plot, Shyamalan inserts a “coming-of-age” redemption element that never really secures footing. Somehow Becca and Tyler must face their demons regarding their absentee father, and throughout the horrific unfolding of events in “The Visit,” they both find themselves. This ramshackle backstory is cliché and ultimately an excuse for a sickening final act.

There are flashes of the genius that directed “The Sixth Sense” and “Signs” in several scenes throughout “The Visit.” These moments of true suspense and surprise are encouraging indications that Shyamalan may be returning to form. However, “The Visit” was equally as annoying as it was enthralling, and only noteworthy because of its director’s recent flops.