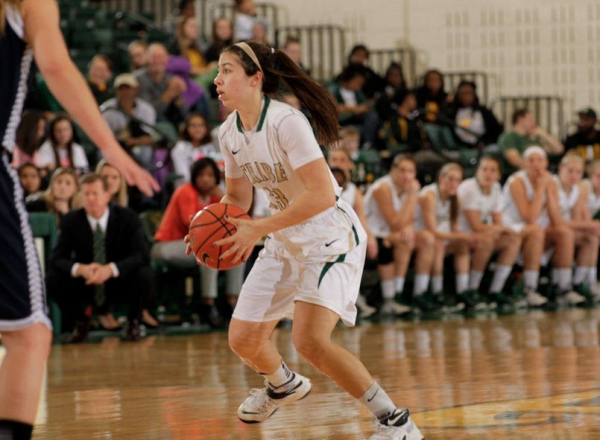 Holding a six-point lead about halfway through the third quarter, the Tribe needed a spark to put away Mount Saint Mary’s. A quick 10-0 run blew open the game and gave William and Mary (1-0) enough of a cushion to hold off a late Mountaineers run in Emmitsberg, Md. Friday night.

William and Mary opened the season with a 76-74 road win against Mount Saint Mary’s for a strong start to the 2015 season, improving to 5-7 in season openers since the 2003 season. The Tribe was led by junior guard Marlena Tremba, who scored a career high 26 points on 9 of 12 shooting from the floor.

The game started out with the teams trading baskets. With a slim 15-14 lead, Tremba nailed a three pointer after the Tribe worked for an offensive rebound on a missed free throw. The triple gave William and Mary a little bit of breathing room by the end of the quarter, as they led 20-16.

The Tribe picked up right where they left off to start the second quarter, as junior forward Alexandra Masaquel scored and was fouled, finishing her three-point play at the line. Masaquel was solid all night for the Tribe, scoring 14 points to go along with eight offensive rebounds.

The Mountaineers fought back in the middle of the second quarter with a run of their own to take the lead, but the Tribe quickly regained it. A late 7-0 run to close the first half pushed the Tribe to a six-point halftime lead, 46-40.

One key to William and Mary’s first-half success was their accuracy from the three-point line.  As a team, the Tribe shot nearly 50 percent from behind the arc, finishing 6 of 13 for the half.

In the third quarter, the Tribe broke the game open with a 10-0 run sparked by sophomore guard Jenna Green. Green scored twice in a row, followed by baskets from Tremba and junior forward Kasey Curtis to balloon the Tribe lead to 16.

The Tribe led comfortably for most of the fourth quarter, but they almost let their guard down too early. With under three minutes to go, the Mountaineers began to climb back into the game for the improbable comeback, rattling off seven straight to cut the William and Mary lead to two with under 20 seconds to go.

Despite facing full-court pressure, the Tribe successfully advanced the ball past half court and ran out the clock before Mount Saint Mary’s could foul enough to put them in the bonus.

Senior guard Brooke Stewart was a spark off the bench for William and Mary, shooting 3 of 4 from behind the arc to finish with nine points.

As a team, William and Mary had a distinct advantage in second-chance points, outscoring the Mountaineers in this category 22-7.  The Tribe also had an advantage in their depth, holding an edge over Mount Saint Mary’s 43-32 in bench points.

While the Mountaineers didn’t have as much production from their bench, they did have four players score in double figures, led by guard Alexis Carter’s 21 points.

Looking forward, the Tribe offense looks strong, especially in spreading the basketball and working the offensive glass for second-chance opportunities, although closing games looks to be an early weakness. They were outscored 21-11 in the final period, and barely avoided relinquishing a 16-point lead.

The Tribe faces Grambling State next in their home opener at Kaplan Arena at 7:00 pm Monday, Nov. 16. After that, the team hits the road for two straight at Richmond Nov. 20 and at Loyola Nov. 23.