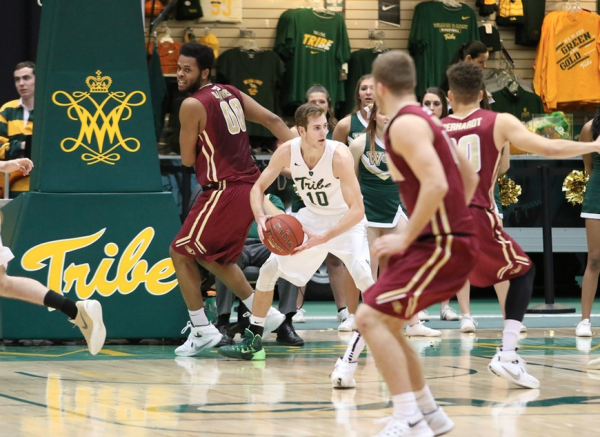 William and Mary returned home to Kaplan Arena for a Thursday night matchup against Colonial Athletic Association opponent Elon. The Tribe picked up the victory 89-67 by way of defensive pressure and high-accuracy shooting through the second half. Three days later, the College went on the road to Hofstra in Hempstead, N.Y., Sunday afternoon for a battle for the No.1 spot in the CAA. However, the Tribe lost control of the game late, as William and Mary (13-6, 5-3 CAA) fell to the Pride (14-6, 6-2 CAA) by a 91-63 score, keeping the Tribe in second place.

Really fine performance tonight, I thought our guys played well,” Shaver said. “I thought the last 30 minutes of the game we defended really well. We made a lot of defensive mistakes early, but did a much better job [in the second half]. I think we beat a fine team.”

Thursday’s game against Elon (12-9, 3-5 CAA) began evenly, with both teams putting points on the board. Senior forward Terry Tarpey had the Tribe’s first six points as teammates missed some early shots before finding their marks. In Tarpey’s run, the Phoenix took an 8-6 run before junior guard Omar Prewitt sank a three-pointer to take the lead 9-8. The game tied at 14 points before the College scored six straight for a 20-14 lead at the 11 minute, 54 second mark. Though the scoreboard said otherwise, the Tribe defense was shaky in the first half, leaving crucial spots open for Elon’s top shooters as well as being in the wrong place to grab rebounds. However, by the late minutes of the half, problems appeared to be sorted out, as the College completed the final 7:16 on a 19-7 run, moving from the lower side of 27-23 to a substantial 43-34 lead by the buzzer. Sophomore guard Connor Burchfield missed a three-pointer at the two second mark after making one earlier in the half, a stat that would come to have some significance by the end of the game. Burchfield would prove to be the most important piece of the Tribe puzzle in the second half.

In a game with six first-half lead changes and three ties, the second half bore no resemblance to the first with the Tribe leading throughout.

My teammates had a lot of confidence in me, and they did a great job of finding me when I was open,” Burchfield said.

The College established its first 10-point lead of the second half via a jumper by sophomore guard David Cohn at 17:13, making the score 50-40. Elon fought back, but the Tribe began to answer each basket with one of its own. With 12:26 to play, Burchfield began a 12-point run through four consecutive shots beyond the corner beyond the arc. At 10:09, the last of the four went in, the Tribe now holding a 65-51 lead. After the game, he led the entire nation in three-point percentage, with 59.5 percent, after converting 6 of 7 shots on Elon from the three-point line, and 7 of 8 overall.

“My teammates had a lot of confidence in me, and they did a great job of finding me when I was open,” Burchfield said.

The Burchfield 12-point streak was interrupted by a layup from junior guard Daniel Dixon, another top scorer from Thursday. After sitting out in the Tribe’s last game, an overtime loss at North Carolina Wilmington, Dixon returned to put up 18 points, just under Burchfield’s game-high and career-high 20 points.

Though offense was a heavy producer in the second half, the defense also contained Phoenix forward Tyler Seibring to a lone three and one field goal after the Phoenix player fired 5 for 7 on the floor and a perfect 5 for 5 from range in the first half.

“We just stuck to our principles,” Dixon said. “I think in the first half we got away from that and let them get a few easy [points]. Second half we made those adjustments and I think [Elon] had a little bit worse shooting half.”

We just stuck to our principles,” Dixon said. “I think in the first half we got away from that and let them get a few easy [points]. Second half we made those adjustments and I think [Elon] had a little bit worse shooting half.”

Looking at statistics, the Tribe dominated all facets of the game: a 40-26 advantage in rebounds, a 36-18 advantage in bench points, 17-0 in fast breaks and 34-26 in the paint. Elon did score more points off turnovers at 17-12, but the Tribe turnover margin was low, losing the ball just nine times. Behind Burchfield and Dixon’s points, forwards senior Sean Sheldon and sophomore Jack Whitman had a combined 16 rebounds.

“Terrific night by the post, I thought both played very well,” Shaver said. “I’m so proud of Sean … he’s turned into a great finisher, lot of confidence. Really leading this team in so many ways right now.”

The importance of teamwork was not lost in the point leaders, who were thankful for the opportunities to shoot due to quality passing, seen in the statistics in the assist column, where the College outperformed Elon 27-15, with Dixon, Prewitt and Cohn all notching five or more dimes on the night.

“Really fine performance tonight, I thought our guys played well,” Shaver said. “I thought the last 30 minutes of the game we defended really well. We made a lot of defensive mistakes early, but did a much better job [in the second half]. I think we beat a fine team.”

After the exciting home win, William and Mary traveled by bus to Long Island for a matchup against the preseason CAA-favorite Hofstra. With the weather delaying the game from Saturday to Sunday, anticipation rose for the rematch of last year’s CAA tournament semifinal, where the Tribe won off Dixon’s last-second three-pointer in a historic double overtime game. The tables would turn this time around, with the College falling for the first time since 2013-14 to the Pride. The score would be 91-63, a significant regression from last season’s high-scoring wins for the College of 100-79 at home, 80-78 in Hempstead, and 92-91 in Baltimore.

The first half and second half looked like two different games. As the first half began, the Tribe appeared to perform how it did against Elon — strong and able to make runs. This is seen by the score at 15:22, where the College led 12-5 after a Dixon three-point dagger from range. A seven-point lead would be the largest for another 11 minutes before the visiting Tribe took a 31-22 advantage at 4:39. The Pride fought back, steadily cutting the lead to a tie at 35 with 1:16 left in the first half. A Pride three made it 38-35 with 19 seconds, but Cohn made a layup in the paint for the one-point deficit heading to the locker room. At the break, the score was 38-37, Hofstra leading by a lone point.

We just really got outplayed on the road by a much better team right now,” Shaver told Tribe Athletics. “I think they’re the team we’ve got to shoot for, they’re playing at the level we need to get.”

The second half was devastating to the Tribe, which, after exchanging the lead for the first six minutes, gave up its final lead at 13:50 when the game tied at 48. The Pride would then go on to lead by 28 points at the end of the game, the College suffering massive scoring droughts as Hofstra achieved a 9-0 run to make the score 57-48 from the tie. A combination of poor shooting and facing a strong defense doomed the Tribe, which was outmatched 53-26 on the scoreboard in the back half.

“We just really got outplayed on the road by a much better team right now,” Shaver told Tribe Athletics. “I think they’re the team we’ve got to shoot for, they’re playing at the level we need to get.”

Cohn led the Tribe with 16 points, Tarpey led in rebounds with eight, and Prewitt led in assists with four. In shooting, William and Mary was 22 for 51 on the floor, 8 for 21 from range, and 11 for 21 from the charity stripe. The bench, integral to the Elon win, was contained to a single point in the second half. Losing the turnover battle, the College lost the ball 15 times, only getting it five times. Hofstra guard Juan’ya Green, the CAA Preseason Player of the Year, scored 30 points to lead all scorers.