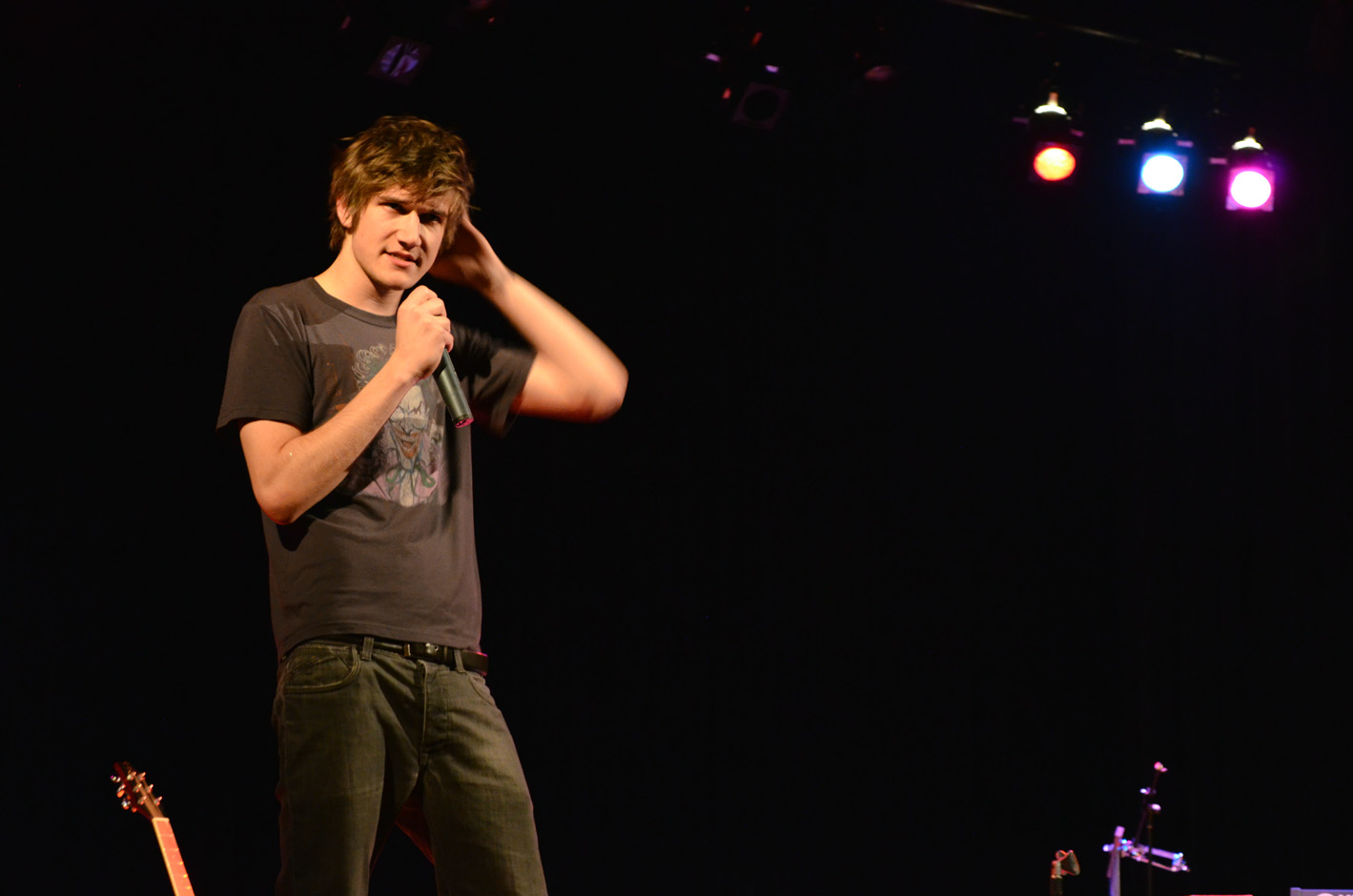 To call Bo Burnham’s comedic style “experimental” would be an understatement. Even among his contemporaries, Burnham is unique in his mixture of musical numbers and (often juvenile) humor, with a little bit of social commentary thrown in for good measure. At only 25, he’s already a comedy sensation with several popular specials and albums under his belt. When I heard that Burnham was going to perform at the College of William and Mary for Charter Day as part of his “Make Happy” tour, I didn’t hesitate to rush out and purchase a ticket.

Before Burnham took the stage, comedian Jesse Thomas opened with a brief bit about a Southern wedding and his failed love life. While far more conventional than any of Burnham’s stand-up, Thomas nonetheless succeeded in warming up the audience for the act to follow, thanks to some spot-on comedic timing. The audience’s anticipation was palpable, however, when Burnham finally took the stage, strolling out in his typical overdramatic fashion.

Burnham’s opening song, a parody of cliche “hype” ballads, created some funny banter with the audience to start the show off on the right note. However, the accompanying music occasionally overpowered Burnham’s voice completely. This might have been intentional, given that it was a parody, but it was nonetheless a bit distracting. Regardless, it was a hilarious start to a show that didn’t disappoint.

One of the more enjoyable elements of Burnham’s stand-up was that he uniquely styled it for the College. Occasionally, he would interrupt his normal performance to ask questions or poke fun at the “elitist” nature of the school. These moments were sprinkled throughout a show that was mostly improv, and the very freeform nature made for some of the more memorable moments of the night.

The first true song Burnham performed was “Straight White Male,” where Burnham lamented the First World problems plaguing his life. The song, given its subject matter, risked turning out a little trite, but it was saved by its self-awareness and some genuine laugh-out-loud lyrics (particularly the ending lines: “We used to have all the money and land / We still do but it’s not as fun now.”). It dragged on a little, as the whole punchline was basically the repetition of the slur, but it still managed to be quite funny.

This was followed by two quick, amusing songs, one of which can only be described as a “nursery rhyme rap,” while the other was an extended joke implying that he had slept with a random audience member’s mother (poor Riley). Afterwards, he made fun of the growing homogeneity of country music with “Country Song.” While certainly effective, it failed to capture the energy of one of his older songs criticizing pop music, “Repeat Stuff,” as it never really went beyond basic parody. It was still quite funny, but it didn’t measure up to the hilarity and ingenuity of his other work.

Highlights of the rest of Burnham’s stand-up include the world’s most over-dramatic yet absolutely hilarious fart joke; the song “Lower Your Expectations” that basically told the audience to give up on true love; a back-and-forth session where he made fun of students’ majors (including one male student who apparently majored in tequila); the return of “From God’s Perspective,” one of the funnier songs from his previous special “what.”; and his own version of a breakup song eloquently titled “Eat a Dick.” His closing performance, a riff on Kanye West’s infamous auto-tune rant, captured the sort of surprising introspection that makes Burnham’s comedy stand out in the first place; after an hour of making the audience laugh, he finished off with a song that seemed comical at first but quickly revealed his insecurity as a performer and served as a meaningful love letter to his fans.

Ultimately, Bo Burnham earned his spot alongside previous Charter Day performers like Kendrick Lamar and Ludacris with his own unique, unrivaled blend of musical performance and stand-up comedy. Though some of his songs fell a little flat and his focus on awkward humor and trope subversion may not have worked for all comedy fans, he nonetheless crafted a wholly singular experience for the Tribe to cherish as its own. I personally would rank “Make Happy” underneath his previous special, “what.”, for his best special, thanks to a few weaker songs and an uneven balance of performance and comedy, but Burnham never failed to make the audience laugh.