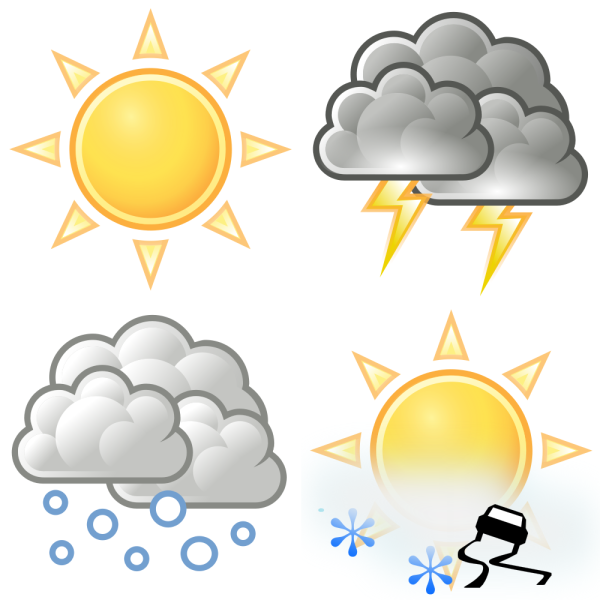 Imagine the following scenario: you’re leaving your dorm, already running late to your 8 a.m. class. Your layers of winter clothing hide your bedhead and duck pajamas, a scarf covering your early-morning grimace, and you’re ready to embrace the post-snowstorm winter chill.

Yet suddenly: what’s that? Is that rain? It’s as though Queen February had a rough night and felt the need to take it out on the measly proletariat. Either she found it necessary to drain her moat on us plebeians, or the accumulation of her cold, wet tears seemed sufficient enough to drown everyone. Feeling even more cold and miserable at this hour in your down jacket — that doesn’t have a hood, because the world hates you — you groan audibly and make your way to class, getting drenched as you do so.

By your 12:30 discussion, you’re prepared. Wearing your (this time hooded) winter coat as though it were battle armor, you burst outside your dorm’s doors, expecting a torrent of rain to hit you in the face. Instead, you’re blinded by sunlight. For lack of a better analogy, it looks like Queen February resolved some internal issues and has now decided to suffocate you with happiness instead of tears.  Now, you look like a homeless person as you trek to class in heavy boots and sweatpants, with a jacket bigger and warmer than your tiny cold heart will ever be, in 60-degree weather.

By now, you’ve probably realized that this is not just a hypothetical situation. This has been the past several days of the month, in which the weather just does what it pleases, regardless of season. The amount of times I have checked the weather app and have seen all forms of precipitation followed by a shining sun, all in a seven-day period, is so larger-than-life that it deserves its own talk show. In response, everyone goes nuts, declaring the weather bipolar and frantically sifting through their drawers for a pair of shorts, even though they know they left all of their shorts at home, because in almost any other state, winter months entail Puritan fashion standards — anything above the knee is a no-go. Even those who have lived in Virginia their entire lives cannot get used to these dramatic shifts in weather.

For the longest time, I haven’t been able to figure out why that is, but I think I’ve finally come to a conclusion. These weather patterns come dangerously close to our own “weather patterns.”

Even those who have lived in Virginia their entire lives cannot get used to these dramatic shifts in weather.

Don’t pretend you weren’t that overly hormonal adolescent, smiling one minute and then crying the next for reasons you couldn’t properly pinpoint at the time (or even now). And don’t pretend you haven’t had days where you’re that overly hormonal semi-adult now. The reason these weather changes bring such a level of discomfort is because they remind us of the worst versions of ourselves; the versions that we try to hide by being the typical calm, cool and collected William and Mary student. You know, the one that makes the Dean’s List while simultaneously involving themselves in nine extracurricular activities, running five of them and still making it to the rec at least three times a week? Yeah, that one.

As students in an academically rigorous environment, the stress of it all causes us to physically root ourselves in routine to the point that a single gust of wind, or in this case a small change in plans, could knock us flat on our backs. Yesterday, even a change in dinner plans completely set me off, and I know I’m not the only one. When it seems like there are too many factors in our lives out of our control – for example the amount of work we have and how busy we are — the last thing we need is sunshine on a cloudy day to force us to throw the scarf we were planning to wear back in the closet and hastily change into a t-shirt before our next class. We want to be able to be in charge of as many portions of our lives as we can, and anything that throws us off balance is our enemy.

But does it really have to be?

Let’s face it: we are much too small in comparison to this colossal, cruel world – which, by the way, doesn’t give two hoots about us – to think we can defy the laws of nature.

Maybe the core of our problems is our obsessive need to plan every aspect of our future, present and – though it’s physically impossible – past. But making a blueprint for events further away than Botetourt is from old campus seems useless, when sporadic occurrences are just going to swoop in force us to draw up new plans.

Let’s face it: we are much too small in comparison to this colossal, cruel world – which, by the way, doesn’t give two hoots about us – to think we can defy the laws of nature. It’s nearly impossible to stand tall in a tank-top during a blizzard without getting pneumonia, or to wear your heavy down jacket under a blazing sun without suffering from heat stroke. It’s just as implausible to try to plan out every increment of our academic careers without something going astray.

So, why fight it? I’m not saying be like one of those Daoists that coasts through life by showing up to class with zero percent of their work done just to see what happens and “go with the flow,” but that also doesn’t mean you should go all Heisenberg on your future. Take baby steps. Only plan the next two hours instead of the next two weeks. And for the rest of the time, actually do go with the flow. Live life a little more dangerously, and you’ll realize how much less anxiety-inducing it can be to stand up and go for a walk because you want to, not write down on your calendar that you’re going to go for a walk tomorrow at 2:45.

The next time it’s hot and humid when it was cold and snow just 24 hours ago, change out of your wool hat with a smile on your face instead of a frown. Don’t let the little things like weather give you anxiety just because you can’t control them. Instead, celebrate the fact that you don’t have to control them. You should know from the five clubs you’re in charge of that being in a position of power is taxing anyway, so just relax as someone else takes the reigns for once.