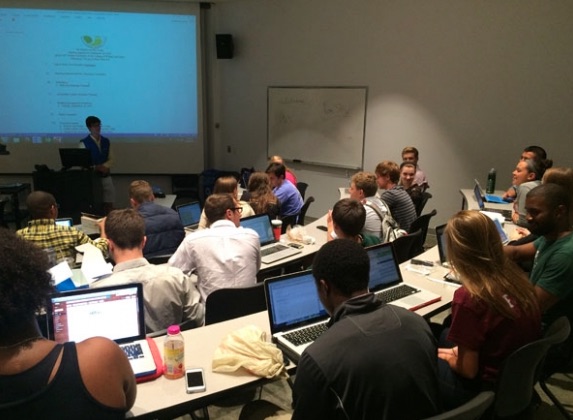 The College of William and Mary’s Student Assembly holds much more power than many students are aware. In addition to allocating funding, that totals around $700,000, to all major student organizations, the SA also introduces legislation that can affect the lives of fellow students on campus.  It is therefore alarming that many of the 20 members of the assembly do not participate fully in their weekly Tuesday discussions. Many have not spoken since Oct. 27 of this school year, when statistical records started being kept. The lack of legislative sponsorship by some members is even more worrisome.

Any additional participation would undoubtedly be helpful to SA’s discussions, as new ideas can be introduced and debated for the sake of the student body as a whole. Furthermore, public speaking and participation should be an expected element in any sort of government organization. This is simply how democracy works.

We can concede, however, that one’s lack of participation in discussion would not be wholly damaging to the assembly’s reputation. An officer with unsatisfactory participation, for example, might be doing work behind the scenes, or may have had legislative ideas proposed in private.  That said, we can still admonish some members’ lack of sponsorship of bills. Indeed, many senators have only sponsored one bill, while some have not sponsored any at all. This is truly an issue that the assembly should address internally, given that the enormous monetary responsibility that the SA has and the fact that many members do not even participate in discussion.

The numbers on the matter are concerning, as these officials, who have been elected by fellow students no less, are not necessarily contributing to the voice of the council. It is the assembly’s responsibility to actively pursue the betterment of life on campus. Every single elected voice on the assembly must participate in some way.

The lack of participation by some members leads to a disproportionate amount of participation by members who have to pick up the slack in discourse. Indeed, with respect to the Class of 2018, one member accounts for 83 percent of his class’s total participation in discussion. This disproportionate contribution is not democratic by definition, even though democracy is what the assembly was created to model. There are many potential solutions. The assembly could modify the legislative process to help increase member participation in both bill sponsorship and discussion. To help underclassmen become acquainted with the process, for example, those upperclassmen that do participate can help new members write or even co-sponsor bills more often. This would help new members who may be shy or may feel like outsiders become more comfortable with their position.

Given the enormous social and financial responsibility invested in the SA, it is critical that the organization address all facets of the issue of lackluster participation to carry out the important roles that it was created for. Only then can the SA achieve a more involved connection with students, and serve the student body in a better, more effective way.

The staff editorial represents the opinion of The Flat Hat. The editorial board, which is elected by The Flat Hat’s section editors and executive staff, consists of Aine Cain, Emily Chaumont, Isabel Larroca, Miguel Locsin, Quinn Monette and Kayla Sharpe. The Flat Hat welcomes submissions to the Opinions section. Limit letters to 250 words and columns to 650 words. Letters, columns, graphics and cartoons reflect the view of the author only. Email submissions to fhopinions@gmail.com.