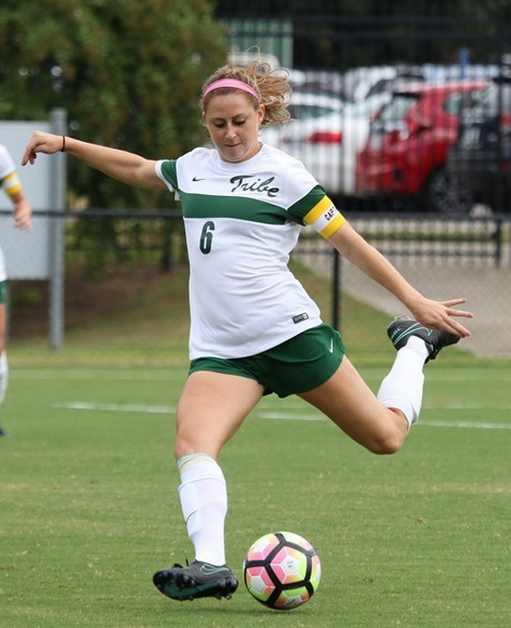 Freshman midfielder Reeves Trott started on the bench for William and Mary (4-1) Saturday night, but he found a way to defend his Colonial Athletic Association Rookie of the Week selection in style. Trott came on as a substitute to net a pair of goals and involve himself in two more as the Tribe defeated Campbell (1-2) by a score of 5-1.

After the College dominated the opening sequences, it looked as though a shock could be in the cards early in the second half when Camels defender Juan Valderrama one-timed a shot from outside the box to give his team a 1-0 lead and end the College’s bid for a third straight shutout. The goal spurred the Tribe offense into action. Junior forward William Eskay opened the scoring, beating the goalkeeper one-on-one after Trott slid a pass to him, tying the game at 1.

Sophomore forward Rider Bell notched his second goal of the season just four minutes later to put the College ahead for good. The Tribe, which has never lost to Campbell in four attempts, continued the offensive onslaught. Redshirt senior midfielder Jeff Bombelles collected Trott’s blocked shot and rolled a third into the back of the net. Trott, now the Tribe’s leading goal-scorer with four goals, scored twice more to round off the victory. The second was particularly fluid, as redshirt junior Riley Spain sliced open the Campbell defense with a long through pass. Trott was on hand to receive the pass and fire it home to make the final margin a 5-1 victory.

Trott, now the Tribe’s leading goal-scorer with four goals, scored twice more to round off the victory.

The College offense looks to be coming together just in time for the start of CAA play next week, where the Tribe will travel to No. 22 Delaware. The Blue Hens recently entered the national eye after their 3-0 start to the season. However, despite the dominant victory over Campbell, the Tribe will be disappointed if it concedes a goal, which would end its clean sheet streak at 243 minutes.

Meanwhile, the women’s team (5-2) boasted a stingy defense of their own this week, shutting out both Virginia Commonwealth (2-3-1) and North Carolina-Greensboro (3-4-1) in 1-0 and 2-0 wins, respectively. The Tribe’s victory over local rival VCU was particularly tight. The Rams fired 22 shots, and all 13 shots on target were handled expertly by redshirt junior goalkeeper Grace Smith.

Smith, who did not play in goal last year backing up CAA Defensive Player of the Year Caroline Casey ’16, has impressed thus far in the season. Other than conceding three goals to a tough Maryland team, Smith has made 37 saves across seven games and lowered her goals-against-average to 0.85.

The Tribe had just enough offensive output to match their defensive tenacity. Redshirt freshman Sarah Segan, who missed her entire first year with an injury, has returned with a fury, and she scored her third goal of the season 16 minutes into the game. Mackenzie Kober found an opening for a through pass, and Segan slid the ball past VCU goalkeeper Audrey Sanderson to give the Tribe all the breathing room they needed.

The College wrapped up their Sunday game more convincingly, as two early goals put the Tribe in the driver’s seat against Greensboro. Sami Grasso, such an important part of last year’s attack, notched her first goal of the season on another assist from Kober. Then, as the College piled on the pressure, a defender misplayed the ball. Greensboro goalkeeper Chloe Buehler rushed out to prevent the danger, but the Tribe’s leading goal-scorer, Rachel Moore, was there first. She knocked the ball into the bottom-left corner for her fourth goal of the season, and the Tribe did not look troubled for the remainder of the match.

The women’s team returns from their travels to a five-game home stand, taking on High Point Thursday at 7 p.m. and Marshall Sunday at 2 p.m., both at Martin Family Stadium.