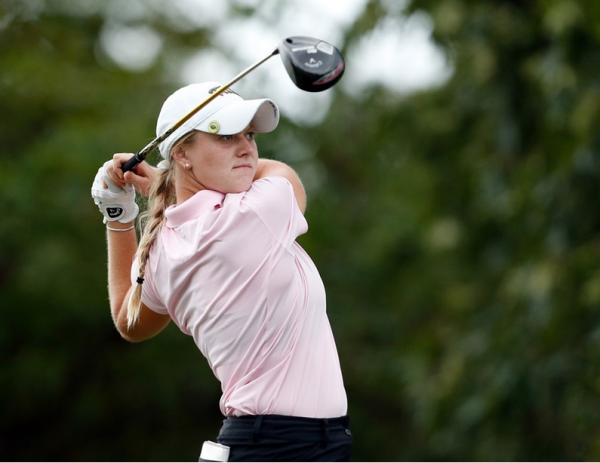 William and Mary’s women hit the links last weekend at the Nittany Lion Invitational, finishing in eighth place of the nine-team, two-day tournament.

The Tribe completed the first two rounds of competition Saturday in sixth place, shooting rounds of 314 and 306, respectively, for a combined score of 620 (+44). It trailed leader and host Penn State by 30 strokes heading into Sunday’s final round, the Nittany Lions shooting a 590 (+14). The College dropped to eighth place with a third round 321, bringing its tournament total to 941 (+77). Penn State maintained its place atop the leaderboard to claim victory, outperforming runner-up Colombia by 21 strokes.

Fresh off her victory at the William and Mary Invitational, Edelblut finished in a tie for 14th at Penn State with a three-round score of 228 (+12).

On the individual scoreboard, the Tribe was led by junior Katie Edelblut. Fresh off her victory at the William and Mary Invitational, Edelblut finished in a tie for 14th at Penn State with a three-round score of 228 (+12). Not far behind her was senior Mia Zanghetti, who tied for 20th place with a 15-over 231. Two other College golfers cracked the top 50, sophomore Elizabeth Choi and freshman Allison Olberding, who tied for 42nd and 48th, respectively, while sophomore Riley Corona finished in a tie for 52nd. Richmond’s Isabella Rusher took home top honors, defeating Rutgers’s Ashleigh Greenham by one stroke.

On the men’s side, William and Mary faced complications with the weather on its way to a seventh place finish at the Jackrabbit Invitational, held in Valentine, Neb.

Senior Austin Morrison was the College’s top individual performer, finishing three-over par and in a tie for 24th place with a two-day total of 219.

Play was scheduled to begin on Sunday, but high winds forced the first round to be moved to Monday morning. Another delay was announced Monday morning however, as frost made the course unplayable early in the day. When it was all said and done, the Tribe completed the 12-team tournament in seventh, shooting an 881 (+17). Clemson walked away triumphant, conquering the elements as well as the competition with a 17-under 847.

Senior Austin Morrison was the College’s top individual performer, finishing three-over par and in a tie for 24th place with a two-day total of 219. Two strokes back of Morrison was sophomore David Hicks, who tied for 31st with a 221 (+5). Fellow sophomore Will Stewart tied for 38th with a 222 (+6), while juniors Bryce Johnson and Alex Shattuck brought up the rear on the Tribe scoreboard, tying for 41st and 56th, respectively. Clemson’s Doc Redman ran away with the individual title, shooting a 13-under 203 on his way to a six-stroke victory.

The women’s team will begin play at the Starmount Classic in Greensboro, N.C. on Monday, Oct. 3, while the men have some time off before their next event, the Fighting Irish Gridiron Classic, which begins Oct. 9 in South Bend, Ind.