The College of William and Mary’s chapter of InterVarsity, an inter-denominational Christian organization, hosted “A Living Room on Race” Friday, Nov. 30 at the Wesley House as a part of a series of breakout sessions called ethnic lounges, which are designed to help people understand the experiences of specific ethnicities and dynamics of race.

According to Intervarsity’s In-Group Coordinator Amanda Lewe ’19, the organization sees these lounges as a success.

“I genuinely think that people really care about this, and this is an issue that affects their friends,” Lewe said. “And so, part of it is that they need to do the work of that, and by showing up today I think it’s a clear showing of their support.”

“Our exec team has high vision and capacity to think of creative events like this and carry them out through the semester,” Clark said.

The conversation was halting at first, punctuated by long pauses and somewhat awkward silences. Lewe, who was leading the discussion, was not daunted by this and continued to ask questions in an attempt to spark discussion. Eventually, students began to open up, sharing personal experiences and family struggles openly.

InterVarsity Large Group Coordinator Nana Yaa Amoh ’19 said she was pleased with the willingness attendees showed to lean into discomfort during the discussion, especially when the chapter has tried to facilitate discussions in the past that didn’t go as well due to the sometimes-uncomfortable nature of talking about privilege.

“We’ve had this [conversation] before, my sophomore year,” Yaa Amoh said. “Not many white people spoke up because they weren’t comfortable.”

When discussing how the group would approach conversations about race this time around, InterVarsity’s executive board organized ethnic lounges, with the goal of creating a space for ethnic groups to discuss experiences specific to their identities and develop the tools to open a dialogue.

Throughout the semester, InterVarsity hosted multiple ethnic lounges, including an Asian-American and Pacific Islander lounge, a black lounge, a Latinx lounge and a white lounge.  The practice of ethnic lounges was one the chapter adopted after attending the wider Rockbridge training.

The “White Lounge” caused significant backlash, both within InterVarsity and the wider College community. InterVarsity executive board members attribute the criticism to a misunderstanding about the goal of the lounge. They think that most people assumed the event was a place for white people to complain about diversity initiatives rather than celebrate them. Yaa Amoh admits that the idea of a white lounge sounds counterproductive to InterVarsity’s goals but in practice is useful.

“It helps us really understand why racial reconciliation is important,” Yaa Amoh said. “Before any of us had heard of the idea of ethnic lounges, white lounges would have sounded strange to us.” 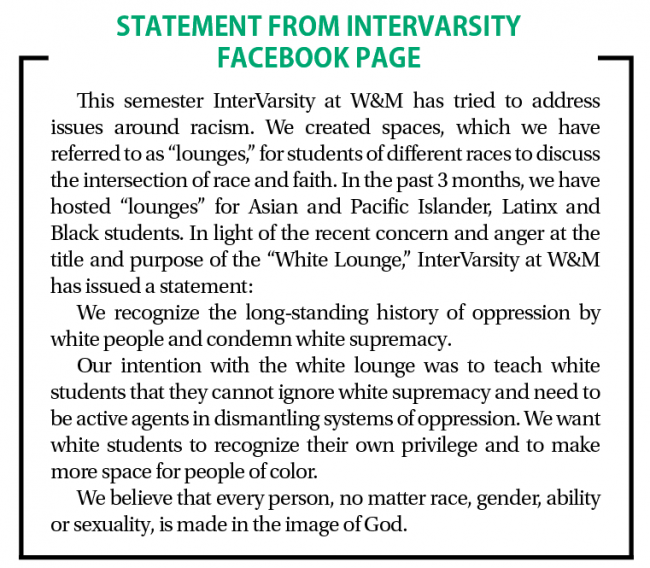 Besides attempting to expose the group to more topics related to the issue of race, InterVarsity members also worked to create a safe environment where everyone would feel comfortable both speaking and listening. While InterVarsity’s safe space adhered to the same basic rules of respect and openness as other secular safe spaces, Yaa Amoh said that she believes engaging in a difficult discussion with members of the same religious faith can facilitate conversation.

“The gospel teaches us that God unites us, so it gives us a little bit more patience and understanding of one another,” Yaa Amoh said.  “Hurtful things might be said … but because we believe in forgiveness we’re quickly able to go past that.”

Lewe said she has high hopes for InterVarsity to become even more inclusive in the future.

“We have no Native American or indigenous people, or any Middle Eastern or North Africans,” Lewe said. “And so, in the future I’d really love to have an even more diverse group of people.”

In addition to facilitating InterVarsity’s discussion, Lewe has created a syllabus full of material — articles, books, podcasts, movies, etc. — about the impact of race in America. Though the project started out as Lewe’s personal reading list, it evolved into a dozen pages of educational material, which InterVarsity members contributed to.

Lewe said she hopes that continuing these race-based discussions will lead to more open conversations about race, with the eventual goal of eliminating racial prejudice within the Christian and secular community.