Like many brilliant ideas, the College of William and Mary’s Media Artist in Residence program originated from a wisp of inspiration. The irony in this case, however, is that the source of inspiration has become the focal point of the program itself. When Troy Davis, director of Earl Gregg Swem Library, traveled to Cuba in the summer of 2009, he had a distinct mission in mind. Davis’s theory and current pursuit is that students must be provided with “vibrant and passionate” spaces outside of the general realm of the conventional classroom, which he calls “third” spaces. His attendance of a particular Cuban film festival led him to Aram Vidal, who ultimately satiated his search for the fleeting third space.

Along with English and Hispanic studies professor Ann Marie Stock, Davis was clearly aware of the fact that Vidal’s powerful documentary evoked interesting and provocative thoughts. From these observations, Davis and Stock decided to act on their reactions and to extend an invitation for Vidal to visit the College.

“[He was invited] to examine the processes of creativity, imagination, cultural agency, internationalization — all in the context of and through the lens of Cuba, a place so geographically close and yet so ideologically far from most U.S. citizens, and most, if not all, William and Mary students,” Davis said.

And that’s how the College’s Media Artist in Residence program was born, adding a new dynamic both to the everyday curriculum for film students and to Swem. Davis and the former dean of university libraries, Connie McCarthy, sought to push the envelope regarding Swem’s role as an innovative center for higher learning. Davis and McCarthy faced several introspective questions, the most important of which they believed to be: How can Swem find new, unorthodox and compelling ways to engage and define broadening notions of literacy in our culture?

“Academic libraries, like Swem, in the 21st century have become clever, hybrid and ambient spaces of quiet and noise, solitude and collaboration, serious[ness] and playful[ness],” Davis said. “For me, this experiment was about the viability of Swem’s Media Center [in] cultivating that third space.”

Certainly an experience ventured away from the standards of a traditional art or video production course, Davis feels the chance to work with Vidal not only provided the students with a unique outlook on learning, but also on the art itself.

“The courses connected William and Mary students with emerging audio-visual artists in Cuba today, including Aram, and I think invited students to see themselves as fellow travelers with other creative persons, other ‘problem solvers,’ and to acknowledge that art — like life — is, above all, intentional,” Davis said.

Unsurprisingly, some of the student body took ahold of this fantastic opportunity, such as Christina Trimarco ’13, a double-major in English and literary and cultural studies with a concentration in film. Trimarco worked with a group of three other students to provide English subtitles to Vidal’s short film about Cuban ex-patriots in Mexico.

“The class in general changes your viewpoint, even in just studying Cuban documentaries as their own subset, because who studies that? It’s not something you typically learn about,” said Trimarco. “It was such an important piece. In the end, we knew we were doing something that was important and meaningful.”
Trimarco was also extremely impressed with Vidal’s passion for the topics he addressed, and the respect he has for film-making in general.

“He basically said, ‘I am the artist in control of this, but I also know this is for a lot more people than just me.’ His humility is incredible.” Trimarco said.

As far as Davis’ predictions and hopes for this program in months further ahead, the actual future is unclear. He says he has a few artists in mind, but in the immediate future he would like to dedicate some time to helping Vidal and the students he worked with create his next visual statement about youth culture, which will emulate his piece from the Cuban film festival. This time, however, America will serve as the primary focus.

“There will certainly be some evidence of a program in the past,” Davis said with a smile. “Our students will make sure of that.”

and services,” Shelly Laurenzo, the staff member in charge of the Student Ambassadors program, said. “Once selected, the ambassadors are trained to help their fellow students in multiple areas, whether they’re critiquing resumes, helping with internship searches,or making referrals to the career counselors in our office.”

The new school year will provide a fresh round of activities, events and programs that all students are invited to attend. One of the first events is the sneak preview of the career center Sept. 16 from 7-9 p.m.
“The first event in the Cohen Center will provide an opportunity to check out the new building, network with 20 or more employers, and enjoy music and hors d’oeuvres in the building, on the rooftop terrace and under a tent on the back patio,” Schilling said.

On the following day, Sept. 17, the Career Center will collaborate with the Office of Diversity to host a Diversity Brunch at which alumni and administrators will be speaking.

“The Diversity Brunch will … bring together students, employers and leadership of the diversity and cultural clubs,” Schilling said.

An easily accessible and friendly environment will hopefully convince students to make better use of the resources the Career Center offers. For students who want to make use of the center but have no idea where to start, setting up an appointment with a career advisor is a good introduction to the resources offered. Another popular service is the mock interviews, which provide a student with a critique of their strengths and weaknesses as interviewers.

“Interviews are frightening and are the basis for the decisions of many prospective employers, and it is difficult to know how to dress, how to act, what to say, and even simply how to prepare,” Olivia Houlk ’11, a Career Center Student Ambassador, said. “Therefore, having the opportunity to practice with interviewers from real companies and get their feedback is invaluable and makes the process a whole lot more comfortable.”

Whether stopping by for a mock interview, an advising appointment or just to ask a quick question, the career center encourages all students at the College to see how they can benefit from the resources available at the center. After college, there are not many places that will provide this kind of step-by-step instruction to handling the ‘real world’, especially at no charge, so students should do their best to take advantage of these opportunities while they are accessible.

“The building makes a strong statement of the commitment of the College to the quality of our students and what they have to offer as they move forward from college to the world of work,” Schilling said. 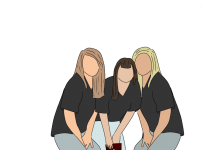