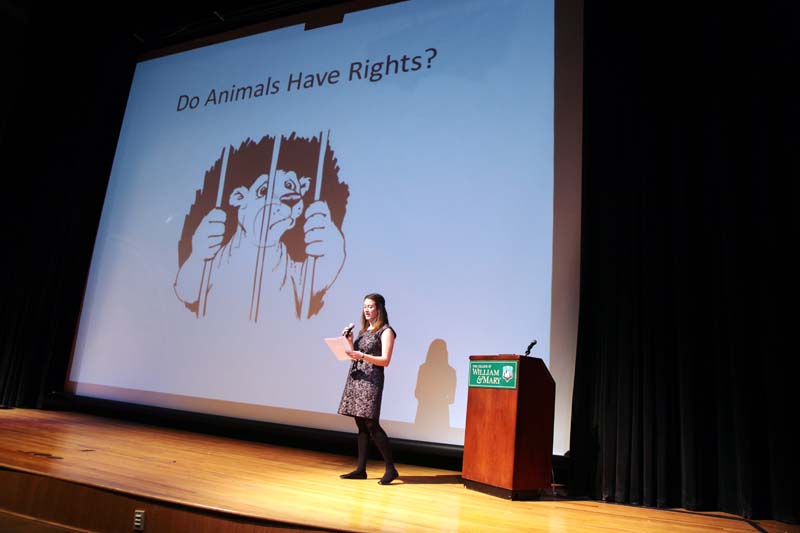 Should we eat meat? A seemingly simple question and yet an issue of ethics that has been plaguing animal rights activists, farmers and the human diet for quite some time.

Although the College of William and Mary is not a typical venue for the raucous protests that come to mind when considering the issue, the topic was the focus of the debate hosted by the William and Mary Debate Team against Bruce Friedrich, Senior Director for Strategic Initiatives for Farm Sanctuary, the nation’s leading farm animal protection organization, on Sunday, Jan. 29 in the Sadler Center Commonwealth Auditorium.

“It [eating meat] is a pertinent issue because a lot of people are interested in learning about it or have considered changing their lifestyles,” Ani-Rae Lovell ’13, the debate team’s vice president of campus operations, said. “Having this debate gives us the opportunity to show what the debate team does and provide a conversation that we think is very valuable.”

In preparation for this debate, the debate team advertised around campus and on the internet to spark curiosity and secure more attendees. The Facebook event created for the debate garnered the most attention, with more people added daily and anecdotal comments and messages posted in anticipation.

“Dialogue is always a good thing. It’s important to analyze your action from a critical stand point,” Alena Stern ’12, president of the debate team, said. “I might argue for something I vehemently believe the opposite of, but it’s good to be informed and well educated on both sides of an issue.”

For the past three years, Friedrich has been traveling to college campuses all over the nation to help students and members of the general public make more educated and conscious decisions about their lifestyle choices. He was previously vice president for policy at People for the Ethical Treatment of Animals, governs and advises numerous vegetarian societies, blogs for The Huffington Post, and has many years of expertise in and personal knowledge of the subject — he’s been a practicing vegan since 1987.

“My favorite place to speak is on college campuses because college students want to make ethical decisions and that is one of the things they’re doing in college — learning what they want and, more importantly, learning how to lead an ethical life,” Friedrich said.

The debate focused on presenting two opposite positions. Friedrich presented the side in favor of the vegetarian diet, answering the question: Is eating meat ethical?

He covered many critical points in his argument, including the fact that animals use the food they eat as energy for everyday biological processes rather than packing it away as extra weight. Feeding animals means more — and more costly — stages in production and eating animals is one of the most significant contributors to environmental problems at every scale. However, his most effective appeals to morality were the video clips and photos of the factories where masses of animals such as chickens and pigs are kept for gestation or given antibiotics to promote unhealthy and rapid growth.

“Everyone raised their hands when I asked if they were compassionate about animals,” Friedrich said. “Animals are made of the same flesh and bone that we are and have senses, emotions, and value their lives, too.  The same reason you wouldn’t eat a dog or cat — there’s no moral reason to eat any other animals.”

Meanwhile, Stern and teammate Alex Rosenberg ’12, vice president of operations at the American Parliamentary Debate Association where the College’s debate team is a member, presented the opposition, answering the question: Do animals have rights?

Rosenberg and Stern addressed two different aspects of the opposition, the emotional and cultural connection we have to household pets versus farm animals and the negative effects of not eating meat, as well as showcasing the negative impacts of increasing the cultivation of vegetables such as soy on both humans and the environment.

“Determining things by virtue of rights, we need to think carefully about who and what we are assigning rights to,” Stern said. “If we assign rights to everything down to our chairs, then the idea of rights become useless, and we would be prosecuted for wearing bug spray or killing mosquitos.”

After the debate finished, there was a brief question and answer session during which students could clear up remaining questions, pose their own scenarios or even ask Friedrich questions about his vegan lifestyle. Many people afterwards also waited afterward to thank Stern, Rosenberg and Friedrich for hosting the debate, saying they benefitted very much from the information.

Due to the success of the event, the debate team hopes to hold many similar future events in order to increase awareness of current issues but also to gain more support for the debate team and their future ventures.