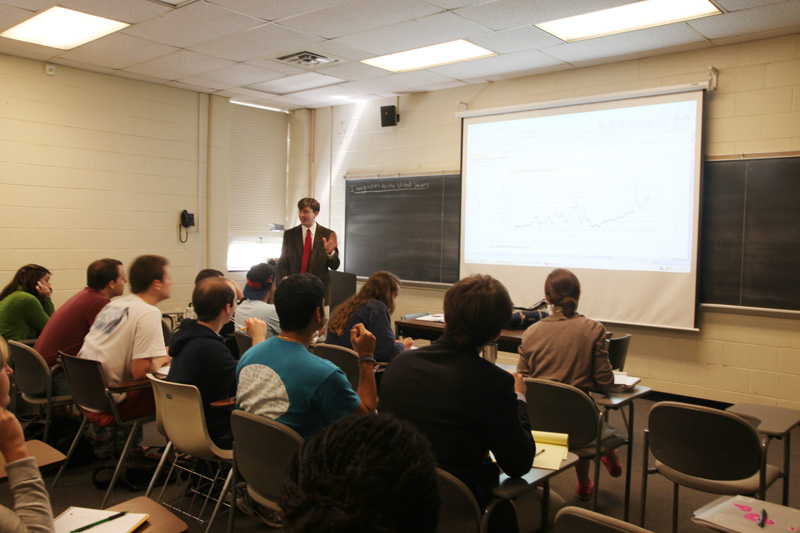 The College of William and Mary announced its acceptance of seven new faculty-led proposals that will hopefully save the College a bit of time — and money. The plans, to be implemented as early as next semester, are part of the Creative Adaptation Fund, which will set aside $200,000 annually over the next three years to fund projects that improve efficiency at the College.

“This fund was designed to leverage and unleash our most valuable resource — the creative energies and ideas of our faculty,” Provost Michael R. Halleran said in a press release. “The seven approved projects are all very different but they have one key component in common — they improve the quality of our educational programs while making the university more efficient at the same time.”

One proposal comes from a team of economics faculty, spearheaded by professor Robert Archibald, and advocates a complete overhaul of the fundamentals of economics courses to encourage greater individual participation in large classrooms of students.

“We teach large sections and lots of people,” Archibald said. “The thing we’d like to do is make learning more interactive.”

The solution: Online learning modules to better acquaint students with economics concepts on their own time. The modules will be largely activity-based, in which students work out important theories through trial-and-error before having them explained in detail.

“We hope that these will improve the quality of learning in these large classes,” Archibald said. “What we’d like is something different.”

One economics student was wary of the benefits of the change.

“I think it really depends on how the school implements that type of educational tool. In my [microeconomics] class we used something similar to supplement the lecture work online, but we didn’t necessarily get too much out of it,” Justin Poston ’13 said. “I just thought of it as a quick homework [assignment] that I needed to do and get over with. It wasn’t really designed for areas that I was struggling with in econ.”

Another proposal for the fund involves a post-baccalaureate program designed to make it easier for students interested in pursuing graduate work in classical studies or archaeology to have a deeper understanding of languages that would benefit their studies.

“Graduate programs in classical studies generally require several years training in the ancient languages,” project leader and associate professor William Hutton said.  “These days fewer and fewer students come in with exposure to these languages, and some of them find themselves in a difficult position when they decide in their second or third year that they’re interested in pursuing classical studies as a profession.”

Last-minute graduate hopefuls don’t need to worry: Under the new program, classical studies students will be able to get their language skills up to par before donning the cap and gown.

Another proposal, led by Deans Kelly Joyce and Teresa Longo, looks into the prospects of launching an optional January program to complement the College’s existing summer courses.

“In general, the idea would be to run a January term like [the College]’s summer school program,” Joyce said.  “It would not overlap with the undergraduate semesters, but instead would offer students the opportunity to take classes over the winter break.”

The funding set aside for the proposal would not kick off the January classes themselves but looks to examine similar programs at the College and other universities to see how feasible such an initiative would be.

“Some William and Mary professors offer research opportunities abroad for students over January, and some William and Mary undergraduates take January course opportunities through other institutions,” Joyce said. “Given that it is already happening at the grassroots level, it seemed like it was time to explore the pros and cons of making it an institutional practice.”

Karen Connor and Judi Harris, from the Schools of Business and Education, respectively, have proposed a six-week “eLearning” summer course to teach interested faculty how to incorporate face-to-face and online components into their courses in order to reach students more effectively.

Currently, the Virginia Institute of Marine Science offers a free education outreach program for marine contractors and consultants. Another proposal for the fund would swap this out for a fee-based approach, which would offer a more intensive program while generating revenue for the College.

Another proposal would allow non-science majors to complete their general education lab requirement through virtual lab exercises, completed online, in order to free up valuable lab space, which is currently at almost 100 percent capacity.

A final proposal would make four prerequisite Masters of Accounting classes available online for non-business students who need the courses for acceptance into government non-profit organizations after college.

As part of the stipulation for proposals to be accepted, new programs could not exceed more than $50,000 in funding and would have to produce immediate results.