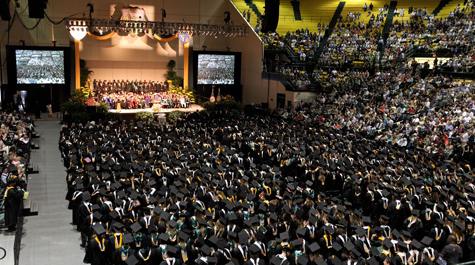 The number of students receiving college degrees has reached an all-time high, according to a new study by the Pew Research Center.

More young Americans aged 25 to 29 are receiving bachelor’s degrees than ever before. In 2012, 33 percent of the country’s 25-to-29-year-olds had completed college at the baccalaureate level.

These record-levels of college degrees persisted across numerous demographic groups. Women and men, along with Hispanic, white and black Americans and native and non-native Americans are all finishing college at record-high levels.

The Pew study cites the economic downturn of the late-2000s and the poor job market as a possible reason for the increase in college attendance and completion, a notion that Sara Marchello, registrar at the College of William and Mary, shares.

“It’s certainly been true throughout my career that higher education enrollments grow in society at large during periods of high unemployment and recession,” Marchello said. “Adults in the age range [mentioned], 25-29, who find themselves unemployed or underemployed, are often in a position to seek additional education (or, in the case of different types of institutions, occupational training) in hopes of improving their employability and/or quality of life.”

Before the 2008 recession, college completion levels had not been as high, likely the result of a better economy.

The Pew Center also cited changing public opinion toward college degree as a reason for the increase in college completion. In 1978, there was an even split among those who thought that going to college was vital for success, and those who disagreed.  In 2009, 73 percent of those surveyed felt that going to college was a prerequisite for success.  Survey results from the Gallup Organization yielded very similar data, including the discrepancy from the 1970s to the 2000s.

Morgan Ferguson ’15 feels that students are pushed to enter college right after high school, due to the changing public opinion on higher education.

“I think for me, college is like the stepping stone for getting the training that I want for my future career,” Ferguson said. “But it’s not just a stepping stone, it’s total enrichment for my life, you know? For most people it’s about the college experience.  Most likely, people that are going back to college are using it as a tool to solely forward career objectives, but [college age] people have the ability to treat it as both things — the stepping stone and life experience.  There’s a difference between being a student at this point in your life, and being a student at a later point in your life.”

Additionally, according to the study, the number of first-time degree-seeking students increased.

“The number of first-generation college students in recent freshman classes has ranged from 140 to 152, and the admission office certainly seeks to enroll top students who will be the first members of their families to attend college,” Dean of Undergraduate Admission Henry Broaddus said.

Broaddus mentioned that enrollment at smaller universities such as the College is probably not contributing significantly to the trend of increasing college completion.

“That said, I expect the bigger impact on the statistic … was enrollment growth at larger universities and the rise in alternative ways to complete a bachelor’s degree, including online degree programs,” Broaddus said.