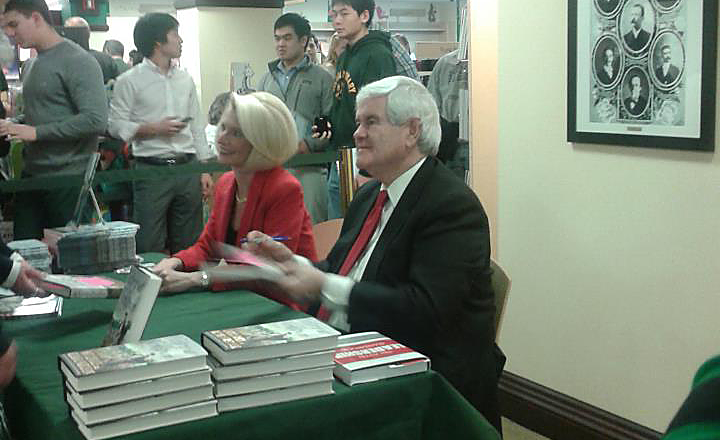 Walking through the doors of the College of William and Mary bookstore Saturday, Dec. 1, one would have thought it was simply crowded with anxious Christmas shoppers and high school students checking out the College. However, at the top of the elevator stood something very unexpected: a swarm of anxious bystanders, one seven-foot elephant and two people dressed in red.

Former Speaker of the House and 2012 Republican presidential candidate Newt Gingrich and his wife Callista Gingrich spent the day in Williamsburg signing copies of their newest books. Callista Gingrich was promoting her new children’s book, “Land of the Pilgrim’s Pride.” The stop was one of many for the couple’s American Legacy Book Tour.

“It was really exciting to see two such prominent figures in Williamsburg,” Kimmy Trauner ’16 said. “They both have had such diverse careers in government and history, as well as in literature, so it was really neat to be able to meet them.”

“Land of the Pilgrims’ Pride” is the newest book in Callista Gingrich’s Ellis the Elephant series, joining her first book “Sweet Land of Liberty.” The series follows Ellis, a young and curious elephant, as he discovers different facets of the birth of the United States.

“I write these books because I love America, and I believe that our country is truly exceptional,” Callista Gingrich said. “I think it’s more important now than ever that our children understand the greatness of this nation.”

The book series places a large emphasis on the importance of American history. Written for the four- to eight-year-old demographic, Callista Gingrich explores the pivotal moments of the early United States, ranging from the 13 original colonies to the story of Pocahontas and John Smith, including a mention of historic Williamsburg.

“I want this to be an introduction of our American history for them, so that they can feel proud of our country and begin to appreciate the courage and sacrifice that have built our nation,” Callista Gingrich said.

Callista Gingrich plans to continue the Ellis the Elephant series with a new book set to launch next year.

Newt Gingrich was signing copies of his own books. The author of 27 books, 13 of which have made the New York Times Bestseller List, Newt Gingrich often explores topics ranging throughout history and public policy.

“We [Newt Gingrich and his co-authors] start with a message, and then work back to a book,” Newt Gingrich said. “We really felt the American people were entering a period that was going to be very difficult. Because Obama is so far to the left, I’ve written a series of books that are designed really not to counter Obama but to counter the academic, intellectual left … books that are really designed to re-center our understanding of America, backed on American exceptionalism.”

Many of his books are centered on landmark moments in American history, and Newt Gingrich himself has a profound appreciation for the subject matter.

“History, ultimately, is about storytelling,” he said. “When someone says to you, ‘History bores me,’ that means they’ve never encountered the stories, because the stories are life. They’re situation comedies, they’re romances, they’re mysteries, they’re tragedies, but they’re life.”

Newt Gingrich went on to explain the different methods he and his co-authors have used to simulate the experience of historical moments firsthand before writing about them. In one instance, his co-author, William Forstchen, went to Pearl Harbor and flew down the exact path the Japanese had taken the morning of the 1941 attack in order to get the experience he needed to write about it accurately.

“Our books tend to be — whether it’s fiction or non-fiction — they tend to be enormously factually based,” Newt Gingrich said. “You learn a lot from our books.”

Newt Gingrich, who has a Ph.D. in history, wants students to realize history is something to be experienced, not just read nonchalantly.

“History is not something to memorize — history is something to think about,” Newt Gingrich said. “Why did it happen? Could something else have happened? What were their choices? That’s a big part of what I try to communicate.”

In addition to writing about history, Newt Gingrich has also written about public policy and politics and notes how the two are interconnected.

“In my mind, the two [history and public policy] are totally woven together,” Newt Gingrich said. “One of my great basic rules is that imitation is better than invention. When I run into a problem, I try to figure out who has already solved it. History has a lot of the same patterns.”

The couple also works together to promote history and government through film and other media. Their production company, Gingrich Productions, is a multimedia company based in Washington, D.C. Callista Gingrich serves as president of the company, which has worked to produce films such as “Nine Days That Changed The World,” “America At Risk” and “A City Upon A Hill.”

“What we’re doing through the books and movies is educating, primarily,” Callista Gingrich said.

She hinted that the two might write a book series together in the future.

Newt Gingrich and Callista Gingrich also encouraged young people to pursue careers in history and government, noting how significant it is that people in the younger age groups exercise passion with regards to their futures.

“You have to love what you do,” Callista Gingrich said. “In terms of getting involved in history, government, politics — you have to look where there’s a need. Volunteer, be engaged, be a part of it. For young people, especially, it’s their future that’s at stake, so it’s really important that young people be involved in the process.”

Newt Gingrich agreed, adding that the key to success is hard work.

“I think the most important attribute is cheerful persistence,” he said. “A lot of people quit, they basically wait for it to be given to them. Everybody that I know who’s really successful works really hard. People keep saying, ‘Give me the 30 hour per week path to success.’ I don’t know of one. Learn everyday, listen to other people, pay attention, and be willing to work a little extra.”