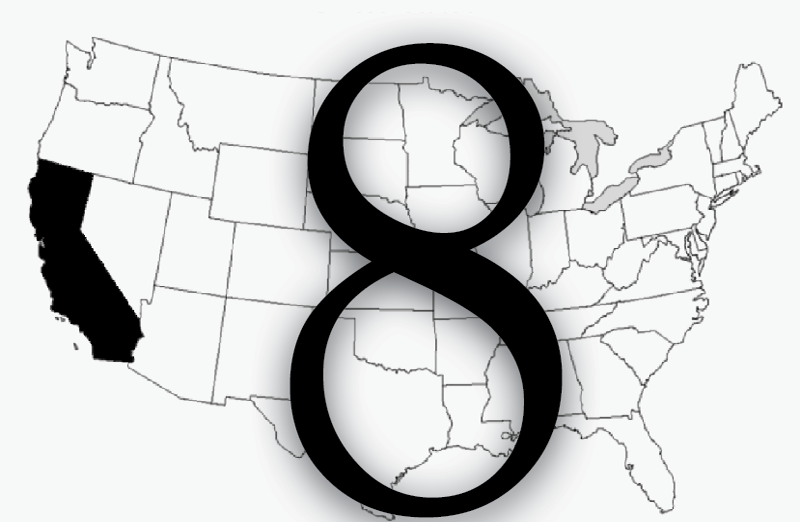 Watching four plaintiffs, three lawyers and one cold courtroom doesn’t sound like a night of satisfactory stage entertainment, but blended with a certain amount of warmth and humor, the ingredients add up to “8,” a self-described play about equality. “8,” scripted by Oscar winner Dustin Lance Black, centers on Perry, et al. vs. Schwarzenegger, a 2010 court case that led to the overturn of Proposition 8, which sought to ban same-sex marriage in California. Friday, Nov. 30, the College of William and Mary hosted a staged reading of the play, directed by Laurie J. Wolf.

The characters, a sprawling cast of no fewer than 22 individuals, sat on stage dressed all in black, standing to deliver their lines. The dialogue stems from transcripts from the actual trial, journalist records and interviews from those directly involved. The story mostly focuses on the plaintiffs — Kris Perry (Kristin Hopkins ’15), Sandy Stier (Rebecca Turner ’14), Jeff Zarrillo (Scott Brewington ’14) and Paul Katami (Jason Durso ’13) — two same-sex couples who, after being denied marriage licenses by the state of California, looked to the court system to seek justice. However, an extended amount of time is spent in the courtroom with the heroic lawyers for the plaintiffs, Theodore Olson (Jamar Jones ’13) and David Boies (Thomas Baker ’13), and the frustrated lawyer for defense, Charles Cooper (Ben Lauer ’13).

The play attempts to elicit a heartfelt reaction from the audience, interrupting the extended courtroom scenes with brief moments of recognizable human confusion, brought about through conversations between Kris, Sandy and their twin sons, Elliot and Spencer (Eric Valery ’16 and Craig Hardman ’16, respectively). Kris and Sandy serve as a bridge between the two worlds of the play: the legal world, where attorneys can deliver lengthy monologues about the sanctity of marriage and its inherent value in society, and the everyday world, where kids are late for soccer practice and people get caught in traffic coming home from work.

This juxtaposition is the main point of the story. The play itself exposes the two different faces of the battle for marriage equality. This clash shows that good, valuable members of society, like the plaintiffs, are surprisingly insignificant as people in the realm of the court, an area dominated by imposing judges and rehearsed speeches. In the eyes of the law, they are seemingly no more than names on a document, and their rights are distributed based on whether their partners are of the “appropriate” gender.

It becomes clear that the courtroom is an area averse to change, and the defense’s entire strategy hinges on this reluctance. Lauer’s Mr. Cooper brings in so-called experts to uphold that any variation in marriage from the one-man-one-woman formula would be detrimental to a child’s upbringing. In a particularly amusing scene, witness for the defense David Blankenhorn (a winningly ditzy Scott Vierick ’15) is cross-examined by Baker’s Mr. Boies. Blankenhorn — a name that couldn’t have been fabricated — attempts to hold his own, but it is evident that his qualifications for appearing in court as an “expert” of anything are overblown. Question by question, with the audience snickering all the way, the lawyer dissects Blankenhorn’s position on the dangers of same-sex marriage until the witness is left stammering defenseless in his chair. This memorable moment shows just how quickly fear and prejudice can crumble when sworn under oath.

Similarly, the play would have crumbled if it had presented all of Prop. 8’s supporters as scatterbrained buffoons. Lauer shows the audience a defense attorney who is a competent man of the law, only on the wrong side of the argument by circumstance. In addition, the play would not have worked if it had spent too much of its time on moments of levity. The most heart-rending testimony is given by Ryan Kendall (Keaton O’Neal Hillman ’16), an individual forced to undergo conversion therapy by his parents. Hillman delivers a performance alternately sympathetic and shocking, illustrating once again the manner in which government-sponsored hate affects real people.

“8” serves not only as a historical account, but also as a hopeful message to posterity. It concludes that although the present may seem like a scary place filled with fear, hate and anger, the future is near, when tolerance will somehow seep into the court system through the efforts of individuals brave enough to stand trial.