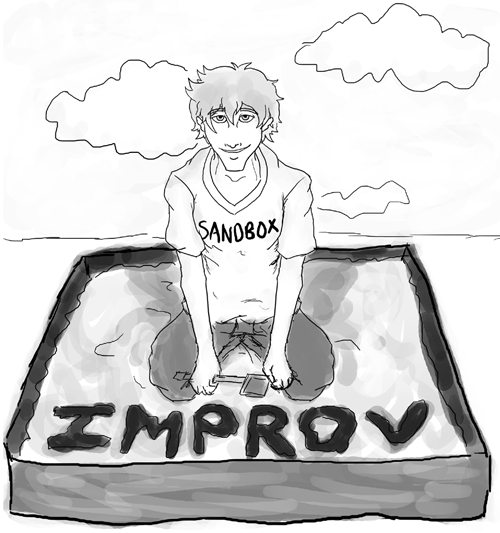 In the sandboxes of our childhood, there were castles to build, worlds to imagine and, for some, an ill-conceived snack to try. Sandboxes were all about play, creativity and fun. Sandbox Improv, the College of William and Mary’s newest improvisational comedy group, is no different.

Favret met the group’s other members at callbacks for the College’s more established improv group, Improvisational Theatre. Following the auditions, Favret reached out to Torrence with the idea to form a new group. The members spent last semester practicing, and their semester culminated in their first show at the end of 2012.

Even though the Sandbox Improv group came together because of I.T. and both perform improvisational comedy, the two organizations are supportive of one another.

“We have a good relationship with them,” Torrence said. “They all came to our first show; they hugged us.”

“They are very talented,” he said. “It is interesting to see improv done from a different perspective, to see how they blended some of the stuff [I.T.] does with the Chicago style.”

The two groups joke around about an epic rivalry existing between them, but at the end of the day, they want the best for each other.

Apparently, the feeling is mutual.

“I secretly love [I.T.] more than anything,” Goldberger said.

Comedy lovers can keep their fingers crossed that the two groups may eventually perform together. Warsing suggested that collaboration might occur in the future.

The main difference between the two groups is the style of improv they use. Sandbox Improv presents long-form improv, as opposed to the short-form that dominates I.T.’s performances. Short-form improvisation, according to Pleasants, consists of games that have rules and are relatively structured. Long-form improvisational sketches focus less on the punch lines — as a result, there might not be as much immediate or uproarious laughter — and more on building a story.

“There’s a little bit more depth to it,” Goldberger said. “We try to put more into each scene.”

Group members strive to establish relationships and create some degree of a narrative throughout their show, all off the top of their heads.

Each member has a different level of experience and knowledge. Torrence and Sutherland joined the group without any background in improvisation. Goldberger, like Pleasants and Machlan, did improv in high school but feels he is still learning.

Members practice by doing improv exercises, similar to those performed during a show and occasionally studying online videos.

Their humor comes from the ease with which they interact. Their scenes are littered with pop culture references, nods to the College’s “Twampy” tendencies and wit, however the way they play off one another is what gets the laugh.

Warsing, having seen their show last semester, was particularly impressed with Sandbox Improv’s ability to work together.

“All of them seemed extremely confident on stage,” he said. “They worked well as a group, and each member had a unique personality and added something different to the show.”

Even though the group is working to set up performances and gain new members, its attitude is quite low key.

“We are just out to have fun and make some friends,” Torrence said. “We don’t call it rehearsal, we call it playing.”

Although definitive dates have not been set, Sandbox Improv is planning to perform a show and hold a workshop and auditions by the end of January. Torrence encourages people to come if they have any interest at all.

“The world is full of funny people,” Sutherland said.

Because of Sandbox Improv, students at the College may get to see a few more of them.