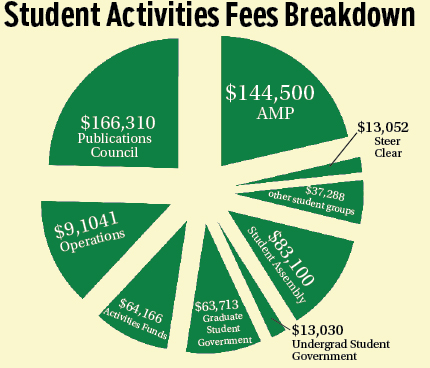 The Student Assembly Reserve fund has reached an unprecedented low of $13,839.75 for the spring semester. Starting the year at $110,518, various large programming events, including His Holiness the Dalai Lama visiting campus and two upcoming spring concerts, have nearly depleted the funds.

“The SA has never gotten anywhere this close to the red,” SA President Curt Mills ’13 said. “It’s [because] we’ve been spending a lot. It’s not something my SA career has really prepared me for because there’s always been this massive [SA] reserve. … This budget wasn’t designed for what we did this year.”

Due to the financial trouble of the SA, Mills temporarily suspended free STI testing at the Health Center for the next two weeks. Senators are currently working on a bill to allocate the funds needed to continue this program and are considering instituting limitations to avoid College students abusing the program.

According to Mills and Secretary of Finance Brett Prestia ’14, the SA Reserve has dwindled due in part to free STI testing and free airport shuttles for College students during academic breaks.

“The reason why we’re in this situation now [is that] in the past, we had a lot of money and it was just the general attitude on campus from, say, parking services or the health services, that the SA is providing this service, [so] just keep providing it to the end of the year and then we’ll bill you at the end of the year because you have so much money,” Prestia said. “We’ve reached the point now where we no longer have a lot of money in the reserve through Charter Days and other big events we’ve had the last couple years.”

Prestia advocated operating with a more conservative outlook toward SA finances, and noted that records show that the SA receives more requests for funding in the spring than in the fall.

“It’s not a big situation, it’s more of a wake-up call,” Prestia said. “We need to work with a much more pragmatic budget and we need to start limiting these entitlements. …We just need to get in the mindset of ‘Let’s stop fully funding things that are no longer a priority.’”

Although Mills is proud of the number of large events the SA was able to fund in the fall, and the prospective events being planned for the spring semester, he recognizes the inability for last year’s budget to accommodate this strain.

“We can’t do a huge speaker in the fall – really two, with [Bob] Woodward, which cost Alma Mater Productions [an SA-funded group] a good deal of money, and the [His Holiness the] Dalai Lama,” Mills said. “And we can’t do two concerts in the spring combined with all these free services, combined with, you know, pretty generous budgets for student organizations combined with financial flexibility. Something’s got to give or you’ve got to raise [the student activities fee].”

The student activities fee is determined through the SA budgeting process in which student organizations, including the SA itself, propose budgets for their respective organizations, taking into account planned expenses for the following year. Last year, the approved organization budgets amounted to a total budget of $676,200, resulting in a student activities fee of $98 per full-time student. This fee was paid by students at the beginning of the fall semester.

President of Student Engagement and Leadership and Director of Office of Community Engagement Drew Stelljes addressed the SA Senate in their Tuesday meeting, commending this year’s initiatives, despite their expense.

Through the efforts of Secretary of Finance Brett Prestia ’14, the SA located a forgotten off-campus SA account totaling $3,978.  The account was lost at some point between the presidencies of Crissy Scott ’11 and Kaveh Sadeghian ’12. Prestia was able to remove the previous SA members listed on the account, Scott and her Secretary of Finance Paul Lenway ’11, and add himself to the account over the Winter Break. As of now, there is no indication of what the account was used for.

On Tuesday, Stelljes announced that he had also found unused funds that are once again at the SA’s disposal. Stelljes located $8,000 previously earmarked last year to pay the salary of a graduate student assistant. The SA is not permitted to pay student salaries and there is no student in this position.

“Right now we’re in a little bit of a sticky situation with money and this will bail us out in a way,” Prestia said.

Prestia encouraged continued awareness of the state of SA finances this year and in subsequent years.

“[Finding this account] serves as an excellent example of people who need to take those extra steps to monitor what people should be doing,” Prestia said.