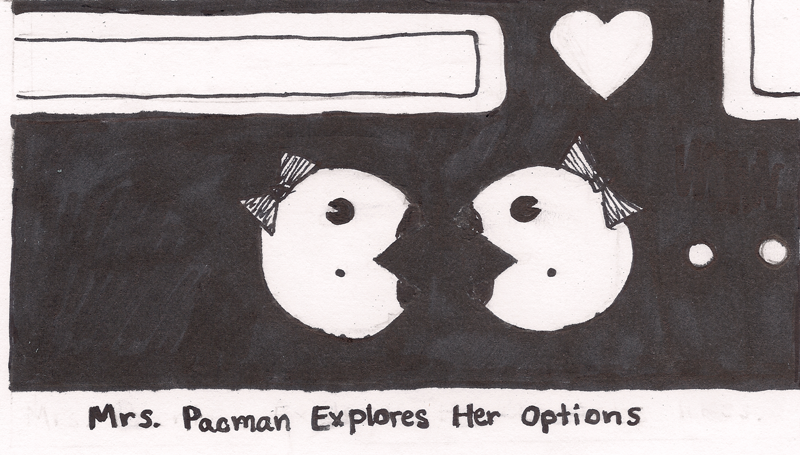 Recently, I had my first truly sexual experience with another girl.

I have always found women attractive, and I’ve kissed my fair share of girls. When I first started kissing girls, it was motivated by a pathological need for attention and just a dash of curiosity about what it would be like. But mostly, it was for attention  — I learned quickly that kissing your girlfriends was a good way to make boys want to kiss you, too. At 16, I was not at all confident about sex, nor was I particularly experienced, but I wanted people to think that I was. The first time I got drunk, my best friend and I made out at a party, much to the delight of the circle of boys who got to watch. I hooked up with one of the guys later that night.

When I got to college, I had mostly gotten over the heady thrill of doing something scandalous to garner sexual attention. Just kidding — I’m still not over it and probably never will be. What can I say? I’m an exhibitionist. However, I have stopped making out with girls at parties to get boys to look at me; at least I have grown up a little bit. I realized it’s not really cool to imitate lesbian behavior to get heterosexual attention.

Still, that curiosity about what it would be like to be with a girl wasn’t satiated by all my drunken, giggly girl-on-girl kisses. I just never grew out of it. So one night, when a girlfriend and I found ourselves topless and making out, I didn’t say no.

It all started with a few friends, “Magic Mike” and several bottles of champagne. We got drunk. We started kissing in my kitchen. For some reason, our shirts were already off, and I’m going to blame “Magic Mike” for that one. What started as a silly, friendly kiss suddenly became sensual. We went to my bedroom, leaving our other friends downstairs to wonder.

A hookup is a hookup. The process of taking off clothing and kissing doesn’t really change when the gender of the person who you’re with does. The entire experience wasn’t really that different from having oral sex with a guy — it was just the P in V part that obviously couldn’t happen in the same way, but fingers work well for penetration. We were both too drunk and inexperienced with girls to try anything else.

Waking up next to her in the morning made me realize that, for me, the person I’m hooking up with matters more than his or her gender. We laughed about it together and went with friends to get pancakes. Our friendship hasn’t changed — that night was just a fun thing we did together once when we were drunk and wanted to experiment.

That’s not to say it was just a fleeting moment or a meaningless experience. That night has obviously made me question my sexuality: Do I identify as a bisexual? Where do I fall on Kinsey’s infamous scale? These are questions that I am still working to answer.

This experience changed my definition of sex, too. When hooking up with guys, I never counted oral sex as sex. I’d call it a hookup and move on, telling myself it didn’t really count unless there was penetration. I did this not because I didn’t want a high number, but because oral just never felt intimate enough to be called “sex.” Somehow, it just wasn’t personal enough to count.  That night made me realize that oral can be incredibly personal. Regardless of gender or what base you reach, any sexual encounter is only as intimate as you and your partner make it.  Experimenting helped me learn how to create that sense of intimacy, even during a casual, one-night hookup.

Elaine B. is a Behind Closed Doors columnist  and enjoys a nice stack of pancakes after a long night.