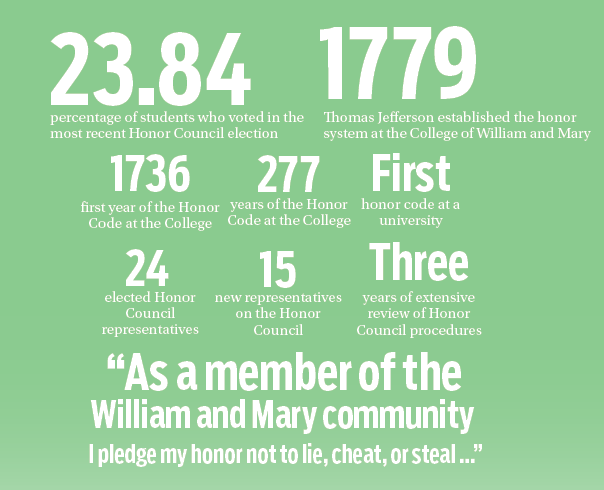 When students enter the College of William and Mary, the Honor Code is one of the most respected traditions they encounter. However, when the voter turnout for the Undergraduate Honor Council for the 2013-14 term came in Jan. 24, only 23.84 percent of the student body cast ballots. Despite the small turnout, this was an increase from 20.4 percent in 2011.

“From my experience, it’s risen a tiny bit steadily over the past few years,” Elections Committee Chair Alice Shaughnessy ’13 said.

Still, less than one quarter of the student body cast a vote in the recent election.

“It’s kind of disheartening, especially because it is so easy to vote. And it’s hard, because you don’t know the candidates,” Incoming Council Chair Erin Hills ’14 said, comparing the numbers to similar turnouts for Student Assembly elections. “I think that all elections on campus face the same issues.”

The recent rise may be due in part to increased outreach efforts from the Council.

“We held two meet-the-candidates information sessions, which were new this year and pretty exciting,” Shaughnessy said. “It was so students could come in if they felt like maybe they didn’t know people who are running. Especially if you’re a freshman, you might not know rising seniors who are running, so there was kind of a meet-and-greet.”

The issue of student outreach has been a sticking point with the Undergraduate Honor Council in years past.

In 2010, the SA moved to cut funding to the Honor Council unless the Council reformed its proceedings and election process to make them more transparant. The two bodies eventually came to an agreement, but not before the College administration announced they would fund the Council directly.

That year, College President Taylor Reveley announced the creation of the Honor Systems Review Committee, designed to address weaknesses of the current code and propose a new set of regulations.

Three years later, the HSRC has not yet finalized these revisions, but HSRC members say they are closing in on a final draft.

“Believe it or not we are finally very, very close to putting out a proposed redraft of the Code that reflects the recommendations from our spring 2012 report,” HRSC Chair professor Clay Clemens ’80 said in an email.  “We hope to do so before break and then begin to solicit feedback.”

HSRC member and Associate Dean of Students Dave Gilbert commented on the length of the committee’s deliberations.

“If you ask professor Clemens, he’s done the research, but the last time the code was revised it took a couple of years as well,” Gilbert said. “So I think our initial aim to get it done in one academic year was ambitious for a couple of reasons.”

Despite its extended deliberations, Gilbert said the HSRC is working to get the changes approved as soon as possible.

Gilbert cited the size of the committee and the scope of its work as contributing factors to the delay. The HSRC has undergone considerable turnover as well.

“I am one of maybe three or four standing members from the original,” Gilbert said.

However, this turnover does not surprise members of the HSRC.

“I think that it was expected, knowing that you were fixing a student run process,” Hill said. “Students are going to come and go. … It may delay the process a little bit, but I think overall we’re contributing the same opinions and all agreeing on what needs to be updated on our Honor Code.”

The new code, which could go into effect as early as next year, means the new Council members will have to be trained with a possible new set of rules in mind.

“We’re training them now, hard on the processes,” Hills said. “There’s not much that’s going to change for us, but once we get wind that these changes are going to happen, we’ll continue the training.”

The council in general saw a great deal of turnover two weeks ago, with fifteen new members and eight returning.

Hills ’14 attributed some of this turnover to the organization’s requirement that members not be absent for over fifteen percent of the academic year.

“It’s pretty similar every year,” Hills said. “Oftentimes you want to study abroad, and it’s a big commitment, and often we do have a lot of turnover in sophomore and junior years. … For the past several years that seems like the typical number.”

Shaughnessy gave a positive opinion of the turnover.

“I think it’s a good mix of returners and non-returners,” Shaughnessy ’13 said.