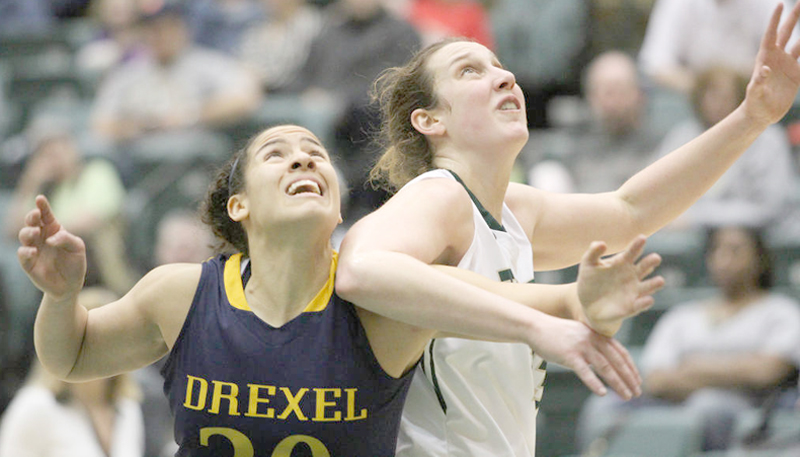 William and Mary’s season came to a shattering end Friday night as the Tribe suffered a 65-31 loss at the hands of Drexel in the quarterfinals of the Colonial Athletic Association Championship. The College (8-22, 6-12 CAA) struggled from the opening tip, falling behind by double digits early and trailing by 30 for most of the second half.

Unfortunately, neither star shined brightly in the contest and the Tribe’s two leading scorers, Correal and Aldridge, remained off the scoreboard, combining to go 0-10 from the field.  Only Hilton could find a rhythm in the College’s offense, scoring 15 points on 50 percent shooting and pulling down 10 rebounds. The rest of the team combined to make just 6 of 38 shots and scored 16 points.

“Drexel played a great game, and we had a lot of trouble scoring early on,” head coach Debbie Taylor said. “We missed 10 layups, five of which were wide open.”

The Tribe played competitively in the opening minutes, particularly on defense, resulting in a one-point deficit five minutes into the contest.  The parity was short-lived, however, as Drexel scored the next fifteen points and ended the half with a 30-6 run.  The Dragons held a 36-11 lead at intermission.

The College committed 11 turnovers in the first half, which led to 21 Drexel points. The Tribe largely abandoned the three-point shot — its usual bread and butter — attempting only two in the first half.  Defensively, the College struggled outside the opening minutes, as the Dragons hit 47 percent of their shots in the first 20 minutes.

Drexel did not let up in the second half, starting the period with a 9-2 run to increase their lead to 45-13.  The Tribe rallied briefly, matching Drexel basket-for-basket for the next few minutes, leaving the score at 53-22 with 12:08 remaining in the game.  Hilton carried the Tribe throughout the stretch, scoring nine points as the rest of the team remained scoreless for nearly 10 minutes of play.

“Drexel’s a really good defensive team and they had our number, Taylor said. “We got shots, they just didn’t go in.”

The College managed to cut down on turnovers in the second half, only surrendering five to the Dragons.  However, Drexel relied on a methodical half-court attack and sharp shooting to stay ahead.  The half remained lopsided as the Dragons hit 46 percent of their shots, 39 percent from beyond the arc.

With the outcome decided, Drexel let up in the last 10 minutes, committing a few turnovers and actively trying to run down the clock and end the blowout as quickly as possible.

One-by-one, Taylor took her seniors out of the game, leaving the future lineup on the court for the final 98 seconds of play.

“This team has belonged to the seniors for so long … I think the younger kids are excited to take it as their team now,” Taylor said.

The defeat ended a challenging season for the Tribe, a team that showed promise at times throughout the year, but ultimately could not put together a strong performance on the CAA stage.  Sophomore guard Kyla Kerstetter and junior forward Kaitlyn Mathieu added six and seven points, respectively, to Hilton’s team-high 15, but no other player registered a field goal in a jarringly weak offensive performance.

The loss fits the narrative of the tumultuous season. With the seniors absent, Taylor will enter next season with a relatively young and inexperienced group.