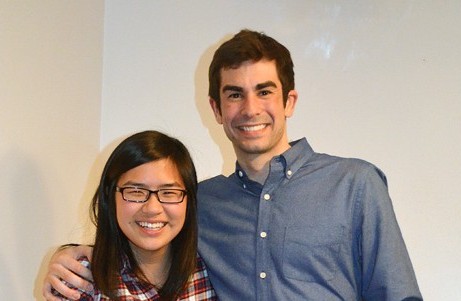 “It hasn’t even sunk in yet,” Alim said. “But this will be a great year, and I’m excited to see all the new ideas and things we can accomplish with student input and the new website. This is our opportunity to connect with the brightest and most passionate people on campus.”

Koontz and Alim won the election with 45 percent of the vote. Runners-up Stacey LaRiviere ’14 and Alicia Moore ’14 fell 495 votes behind the victors, taking 27 percent of the vote. Dylan Frendt ’14 and Courtney Cox ’14 took 17 percent, and John Woo ’14 and Griffin Stevens ’14 received 9 percent.

Voter turnout for the presidential election was 34.7 percent, about a 2 percent decrease from the 2012 elections. While unsure if it set them apart, Koontz said his and Alim’s campaign strategy and the support they received from friends made the experience better than they could have imagined.

“I think the fact that we are both experienced and not experienced in student government and were really approachable helped us,” Alim said. “I also think our ideas of trying to include graduate students and international students more appealed to a lot of people.”

During campaigning, the pair received help and support from friends who worked to increase the reach of their campaign and provide innovative campaign strategies. Both Koontz and Alim credit their friends for their success in this year’s campaign and in reaching out to students.

“Strategy is not our strong suit, but we utilized the connections we have and built on that through our friends,” Koontz said. “Everything that went into this election and the reason behind our win is our friends, and it’s been amazing. They’ve been amazing.”

The duo already has ideas they plan to implement as soon as they are able to do so. However, both Koontz and Alim agree they learned the most during the campaign through interactions with their competitors.

“All the candidates went through this together. Everyone put all their effort into campaigning, and everyone running was extremely passionate about our school,” Koontz said. “We want to build on this and just build a stronger, better  Student Assembly on campus.”

While disappointed at their loss, LaRiviere and Moore voiced hope that the new president and vice president will stay true to their plans for next year.

“Whoever wins the [SA] president or vice-presidential role, I really hope that they deliver upon the promises they made in their platform, and I hope they lead the Student Assembly with passion, dedication and honor, and I wish them well for next year,” LaRiviere said.

Finishing in third place, Frendt and Cox, agreed the election was clean and positive this year with all the candidates bringing something different to the table. They’d like to see the SA improve under the leadership of Koontz and Alim next year, which Frendt and Cox believe they can accomplish through  collaboration and inclusion.

“I think Chase and Mel will make sure this [lack of student inclusion] changes with the website they’ve proposed,” Frendt said. “I honestly believe they’ll be there for the student body and help make the Student Assembly accessible to everybody.”

Woo and Stevens also wished the victors the best for the next year and hope the pair stays true to its promises.

“We wish them the best as the school’s new Student Assembly leaders, and I hope that they stick to their campaign promises and be cooperative and inclusive with the rest of the student body,” Woo said.

For class elections, Grace Martini ’14 was elected president of the class of 2014, and Philip Lavely ’14 was elected vice president for advocacy. The class of 2014’s treasurer for next year will be Brett Prestia ’14, and the class senators will be Peter Lifson ’14, Joseph Scholle ’14, William McConnell ’14 and Chandler Crenshaw ’14. The candidates for vice president of social affairs as well as secretary are not yet determined.

The class of 2015’s president is Brianna Buch ’15, who won by a 50 percent margin. The vice president for advocacy is Carlton Smith ’15, and the vice president for social affairs is Jimmy Carey ’15. The treasurer for the class of 2015 is write-in Tyler Dunphy ’15, and the secretary is write-in Daniel Arsura ’15. The four class senators are Colin Danly ’15, Dan Kennedy ’15 James Walker ’15 and Jimmy Zhang ’15.

For the class of 2016, Daniel Rice ’16 won the presidency, with Ace Goldstein ’16 as the vice president for advocacy and Yousif Al-Amin ’16 as vice president for social affairs. Raymond Schein ’16 and Quetzabel Benavides ’16 won the positions of treasurer and secretary, respectively. There were six different candidates for class senators, but the four elected were Daniel Ackerman ’16, Gabriel Morey ’16, Yohance Whitaker ’16 and Seth Opoku Yeboah ’16.