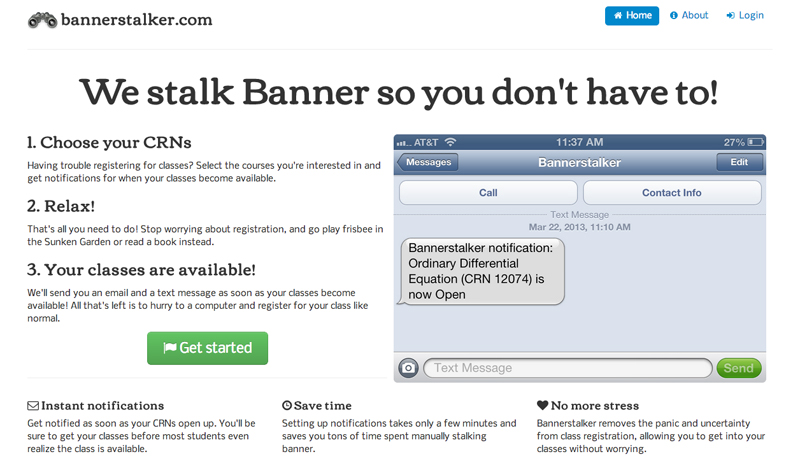 Last year, Peter Johnson’s ’15 friend came to him with a request. He needed a spot in a chemistry lab. It did not matter which section he was in, just as long as he secured the lab. He gave Johnson the course registration number, and Johnson created a program that would notify him when a spot opened up. That program has since evolved into a website to alert a multitude of students to open courses on Banner at the College of William and Mary.

Johnson’s website, https://bannerstalker.com, tracks available classes and notifies students when a seat opens in a desired course. Although Johnson’s site only recently came to the attention of the student body via an Overheard post on Facebook and fliers posted on campus, Johnson has been dabbling with similar creations for years. He designed a similar notification system his sophomore year of high school when he wanted to buy a computer part online that was no longer available.

“I wrote up a quick program that would check it every few minutes and email me when it became available,” Johnson said. “I saw the same thing could be applied to Banner.”

Johnson does not have a team assembled to help him keep track of every course’s availability status. Johnson wrote and maintained the program on his own, which automatically tracks classes by refreshing the existing course list every five minutes. If one class changes, the program notifies everyone who is interested in that class through a text and email.

“The program runs on its own. I don’t have to monitor it at all,” Johnson said. “If it has any errors [or] if something goes wrong, it just emails me the error so that I can respond to it and then it keeps on going. I haven’t had any problems with it so far.”

Johnson believes bannerstalker.com will save students hours of worrying and prowling Banner for open slots. It took Johnson about one month to create, with the first week creating the backend, or the requesting and texting aspect of the program, and the other three weeks designing the website. As of Sunday, 300 people have signed up for the website and 20 have paid to have CRNs stalked for them. The charge is $5 per CRN and an additional $1 for corresponding labs. This money goes toward developing and hosting the website.

This program is very similar to the one Johnson created last year to help his friend.

“I realized there might be other people in that same situation,” Johnson said. “This semester, I completely rewrote it from scratch and created a website so anybody could use it.”

Surprisingly, Johnson’s website has not generated a lot of feedback. Of the 300 people signed on to the site, he has only received five emails, most of which have been addressing small technological hiccups, such as duplicate charges.

“I think when people go on the Internet, everything’s just kind of a faceless website,” Johnson said. “They don’t realize there’s a person behind it sometimes. I’m trying to think of ways to make it more personal, so people know that they can actually email me; [that] I’m just another student.”

While Johnson may not have received direct feedback praising his website, some students believe the site is a good idea. Joy Tanitnon ’13 said she has had horrible registration periods and believes the website will benefit students, especially freshmen and sophomores.

Tanitnon believes the $5 charge is a little expensive, however, even for a desirable class.

Syed Mohammad Asefwafa ’16 also said the website could be a big help to students. Unlike Tanitnon, Asefwafa would be willing to pay the $5 for the service.

“I just think it’s less hassle,” Asefwafa said. “Getting the course you want is worth more than $5.”