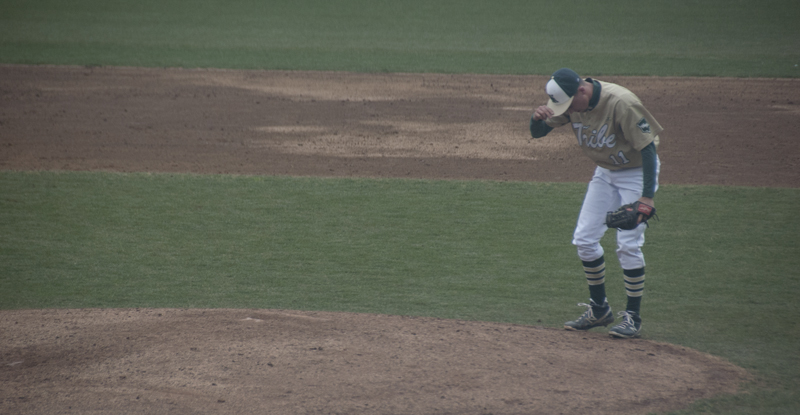 William and Mary saw it all Tuesday, from two-out rallies to sacrifice bunts to walk-off hits. In a non-conference game that see-sawed from the first pitch, the College fell to Richmond 5-4 after a promising ninth-inning rally fell by the wayside, courtesy of two swinging outs and a pop-fly.

After the Tribe’s failed rally, the Spiders (18-9, A-10 3-3) had the winning run on first with one out in the bottom of the ninth inning.

The back-and-forth game began as Richmond scored the first two runs of the game in the first and third innings. Sophomore pitcher J.T. Castner gave up both runs with two outs.

Castner, whose 2.23 earned run average ranks second best among starting pitchers behind only senior John Farrell, allowed only two runs but earned the no-decision, thanks to Richmond’s late-game rally.

Allowing eight hits alongside a strikeout and a walk through seven innings of work, the no-decision keeps Castner’s record even at 2-2.

Senior right fielder Derek Lowe’s single drove in freshman designated hitter Charley Gould in the top of the fourth to bring the Tribe within one run of Richmond. Gould recorded two hits and one strikeout in five at-bats.

The Tribe used a two-out rally to grab the lead in the top of the sixth. Senior shortstop Ryan Williams laid down a sacrifice bunt that drove in junior left fielder Willie Shaw, who had reached first on a walk and advanced to second off of Hissey’s single.

Freshman left fielder Jonathan Sarty kept the inning alive, lining a shot into center field. Sarty’s lone hit of the day drove in both Hissey and Williams for a 3-2 Tribe advantage.

The College tacked on another run in the seventh inning. Junior second baseman Ryan Lindemuth reached first base due to a Richmond error before scoring off of Gould’s infield hit.

Facing a bases-loaded, no out situation, Aker turned in a mixed performance that ultimately brought in two Richmond runs.

Aker hit Richmond’s pinch hitter, Chris Bell, forcing a run. On the season, Aker is tied for second in number of batters hit, with three total.

With the bases still loaded, Aker struck out the next batter for the inning’s first out. The Spiders’ next batter, Mike Small, bunted toward Aker.

Aker chose to take the out at first, allowing the Spiders to tie the game at four apiece. With runners still in scoring position, Aker forced a pop-up to end the inning.

As the ninth inning began, the College’s offense again found some rhythm. Lindemuth and senior center fielder Ryan Brown both reached base on hits. With runners on first and second and no outs, sophomore first baseman Michael Katz and Gould went down swinging. Shaw’s hit only made it to the Spiders’ infield, bringing an end to the Tribe’s attempted rally.

Aker stayed in the game, only to be pulled after walking Richmond’s first batter in the bottom of the ninth. Pinzino called Gaouette into the game, who fielded a bunt as the Spiders advanced the winning run to second.

With one out, Gaouette faced the Spiders’ Mayers. The College’s hopes of escaping the jam were erased when Mayers’ one-out hit landed in the outfield, good for a double and for Richmond’s walk-off win.

Following the non-conference loss, the Tribe and its 5-1 Colonial Athletic Association record travels north for a three-game away series against Towson. First pitch is scheduled for 3 p.m. Friday.