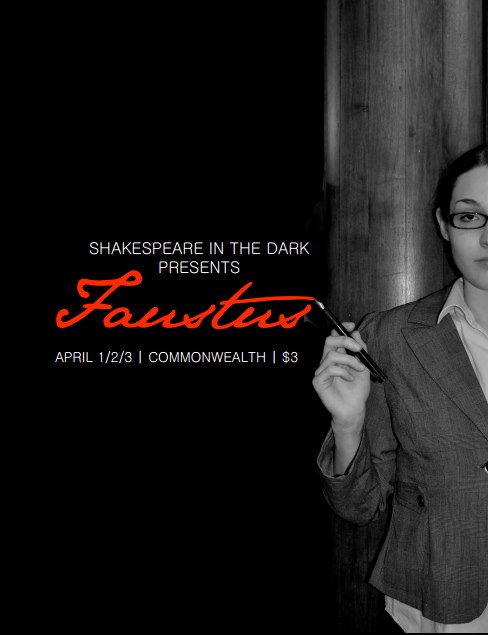 It may be my English-major bias, but I always find Shakespeare in the Dark productions entertaining, humorous and intelligent. The company’s spring production of Christopher Marlowe’s “Doctor Faustus” was no exception.

“The Tragical History of the Life and Death of Doctor Faustus” was one of the first major interpretations of the Faust legend, which originated in Germany. The story is familiar — Faust, an exceedingly brilliant but unsatisfied scholar, makes a pact with the devil for unlimited knowledge and worldly power. His servants and angels urge him to repent, but he believes his sins cannot be forgiven, and the devil carts him off to hell.

Marlowe and Shakespeare were both born in 1564. Marlowe became one of Elizabethan England’s most popular dramatists and pioneered the blank verse style that came to characterize Shakespeare’s work. He died a mysterious early death in 1593 — near the beginning of Shakespeare’s most productive years.

The cast of this production worked quite well together and performed Marlowe’s challenging script with an impressive precision and clarity. Better yet, the players fit into their roles quite naturally.

Erin McIntyre ’15 made a great Doctor Faustus. The gender reversal of the titular role and her strictly business attire and glasses gave the play a fresh, modern feel. It felt as if she were a modern Wall Street finance tycoon, eager to have more earthly powers and control. Zach Hurst ’16, as a quiet, brooding interpretation of Mephistopheles, fit the atmosphere McIntyre created. The manner in which Max Sorger ’16 portrayed Faustus’ servant Wagner as snooty and uptight also worked nicely.

What really made this production of “Doctor Faustus” great was its consistent delivery of laughs. Of course this play would have been drop-dead serious in the age of its publication — it generated controversy for its plot and treatment of theological questions such as damnation and predestination. I’m glad the cast and crew acknowledge that the Faust legend has been appropriated and parodied so many times that it has lost its potency. This production’s interpretation of  the scenes in which Lucifer parades personifications of the seven deadly sins before Faustus and Faustus and Mephistopheles haunt the Pope’s dinner as ghosts are hilarious.

James Joseph’s ’14 portrayal of the devil as a smooth-talker in a pin-striped suit couldn’t have been better. His slyness blended well with Hurst and McIntyre’s performances, and he almost reminded me of Leonardo DiCaprio as a slave trader in “Django Unchained.”

Drunken villagers storming Faustus’s dwelling also added a lot of humor, though those scenes were intentional attempts at comic relief on Marlowe’s part. The actors made good use of Commonwealth Auditorium by beating on the walls and using the open floor to stumble around. Aside from those creative uses of the space, they kept the movement to a minimum to draw attention to the script, a practice which appealed to my nerdy sensibility.

The play regained an appropriate amount of seriousness at the end, when Faustus, either unwilling or unable to repent, is brought down to hell with Lucifer and his demons. McIntyre brought out Faustus’s terror and regret well, reminding the audience that Faustus is a tragic figure — someone great, but cursed with excessive pride.

No significant flaws in the production come to mind, and I encourage Shakespeare in the Dark to continue exploring classic theater beyond the Bard of Avon’s work. However, regardless of its next pick, I look forward to the organization’s future performances.