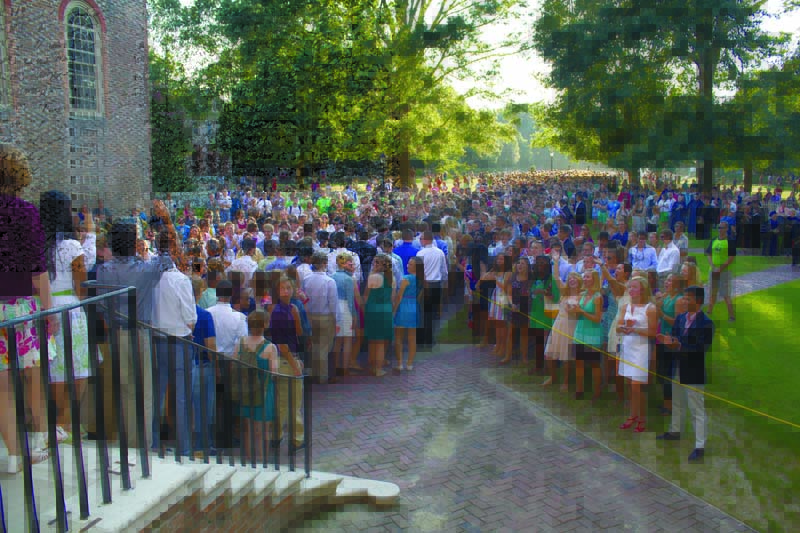 4,565 prospective students received emails March 26 from the College of William and Mary to welcome the class of 2017, selected from a record-breaking number of applicants.

Dean of Admission Henry Broaddus cited increased outreach efforts by the Admissions office as one of many reasons for the significant increase in applicants.

“It’s very much a reflection of William and Mary’s expanded reputation nationally and globally,” Broaddus said.

Broaddus noted that although the admittance rate was lower last year for the class of 2016, the College ended up pulling more students from the waiting list.

“Year-to-year comparisons on admit rate can be misleading,” Broaddus said. “Last year, the admit rate was a little bit lower, but we also ended up needing to take students from the wait list. This year, we felt we needed to adjust the numbers to get our target class.”

Demographically, 33 percent of admitted students for the Class of 2017 are students of color; international students compose 8 percent. Broaddus cited the continuing growth of the middle class in China, as well as the College’s growing reputation, for the increases.

“China’s the biggest single group, but after that, it really is broad,” Broaddus said. “We have students that by their nationality are Sierra Leonian. … We believe this is great. That kind of global diversity is critical to William and Mary’s relevance around the world and to ensuring that our students receive a global experience at the College.”

Admitted students also showed increases in median SAT scores and class ranks. The median SAT score for the accepted class of 2017 was 1410, up from 1400 last year. Additionally, for students with a high-school rank, 89 percent will graduate in the top 10 percent of their class, up from 88 percent last year.

“Who are those students who are going beyond the requirements of those metrics? Who are the students who are writing that we think are going to challenge norms and engage conversation in a seminar? What’s exciting for us is that you hope that it just means we’re continuing to strengthen the academic quality of the university,” Broaddus said.

“Yes, the raw academic information there looks great, but when you dig below that and really see the substance that these students possess both in and out of the classroom, you can’t help but be proud of this group of students,” Wolfe said in a press release.

As the number of applicants to the school increases annually, the job of the admissions staff also accumulates.

“The challenge we face is the pool gets bigger and the decisions get harder, and yet we finish this process in the same amount of time with the same amount of people,” Broaddus said. “We have such an invested staff in the Admission office. You have a lot of assistant deans who are alumni, and they don’t see this as a job; they see this as an opportunity to ensure continuing excellence of a university they love. It does mean people put in very long hours. … It’s such a rewarding opportunity to influence the direction of the institution.”

Admissions staff members will continue their work as they welcome the new class on campus Saturday, April 13 for Admitted Students Day.

“This continues to be an exceptional group of students, a great group of people,” Broaddus said.