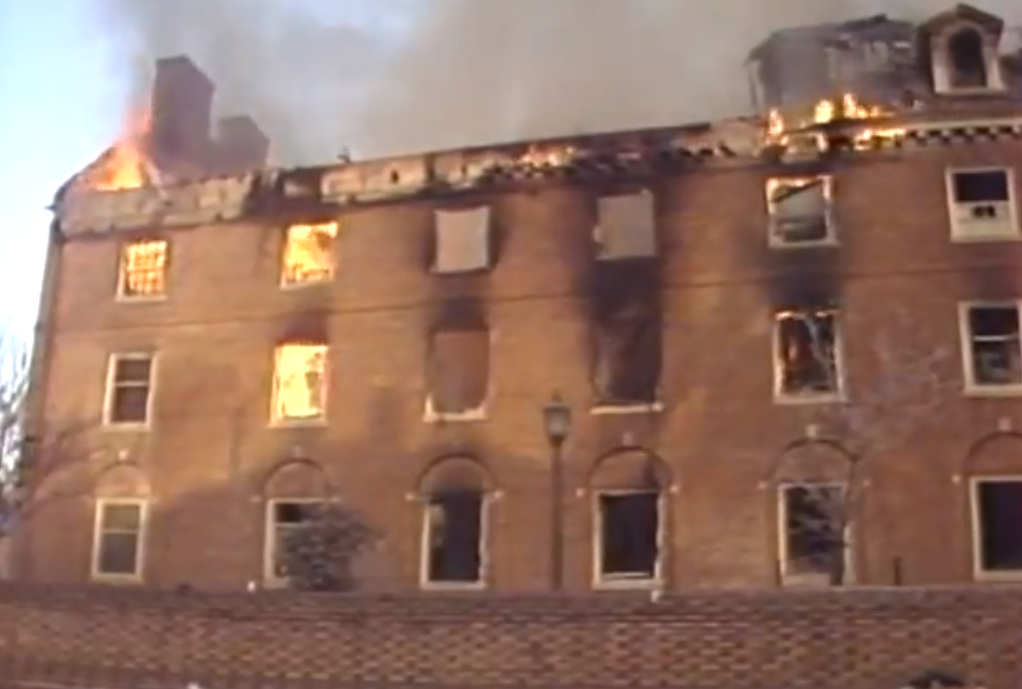 Think triggering a smoke alarm with a burnt bag of Pop Secret is bad?

The morning of Jan. 20, 1983, a large fire abruptly erupted in Jefferson Hall, prompting an evacuation of the building’s 183 residents. Although nobody was seriously injured, the fire was estimated to cause approximately $5 million in damages, and it completely destroyed the entire west wing. The cause of the fire was later determined to be a malfunctioning electrical kitchen appliance.

In Earl Gregg Swem Library near the Writing Resource Center and Tribe Tutor Zone on the first floor, an exhibit is currently on display to recognize the 30th anniversary of the event, dubbed the Jefferson Hall Fire. “Jefferson Hall Fire: 30th Anniversary,” the latest installment of the “Fires At William & Mary” exhibit series, features photos, documents and first-hand interviews, and it is the first exhibit with extensive and detailed information about the fire.

Steven Bookman, university archive specialist and the exhibit curator, believes the primary sources taken from the archives are what made the exhibit such a success.

“There was a lot of television news coverage of the fire damage, but there were also other records created as a result of it, and most people have never seen those before,” he said. “For example, the President’s Office created subject files on the fire, there were announcements and fliers from student organizations trying to raise money to help out their fellow students who lost their belongings, and also newsletters from the Office of Student Affairs about services offered to the students after they moved into a hotel while Jefferson Hall was renovated.”

Bookman continued to say that the exhibit has been well received thus far, with a large number of visitors on a daily basis.

To accompany the exhibit, all materials on display have been digitized and uploaded to the Special Collections Flickr page for easy viewing access. William & Mary Television Services has also produced a YouTube video that features the original television news coverage of the fire.

Jennie Davy, Burger archives specialist and the exhibit designer who created the colorful and vibrant visual display, said the pathos of the items on display make the exhibit particularly noteworthy.

“The exhibit includes photographs showing efforts to put out the fire and the impact on students living in Jefferson Hall, including fire- and smoke-damaged dorm rooms and students carrying their salvageable possessions away from the building,” she said. “To me, the most poignant image of those on display features the top of someone’s dresser, strewn with personal belongings such as underwear, shaving cream, toothbrushes and records, covered in broken plaster from the ceiling. … You can really sense the urgency with which students evacuated the building.”

Other particularly notable photographs include dorm rooms covered in soot, students huddled together for warmth in sleeping bags and the completely windowless and roofless Jefferson Hall after the fire.

The “Daily Blab,” Jefferson West’s newsletter in the 1980s, is a personal favorite of Davy’s on display. “It shows how people across campus and Williamsburg worked to assist the Jefferson students as they tried to replace glasses and other necessities, wash smoke damaged clothing, and make phone calls home,” she said. “You can really start to see the practical challenges of recovering from such an unexpected disaster and feel the generous response of the community.”

The aftermath of the fire brought many changes and adjustments to the College: Students living in Jefferson received temporary housing in Colonial Williamsburg’s Motor House and then the Commonwealth Inn, until the dorm was reopened again in January 1985 after repairing $5 million dollars in building damages. The Red Cross and other Williamsburg locations — like restaurants, cleaners and ophthalmologists — also offered special amenities to help the affected students.

“Preventing dorm fire scares takes concentrated effort,” Jefferson Hall Resident Advisor Dylan Frendt ’14 said.  “Freshmen should definitely remember to put water in their Easy Mac before they put it in the microwave, and should never leave food unattended.  On a more serious note, everyone should remember that extension cords, combustible liquids, open flames and other flammable objects are prohibited in our residence halls.”