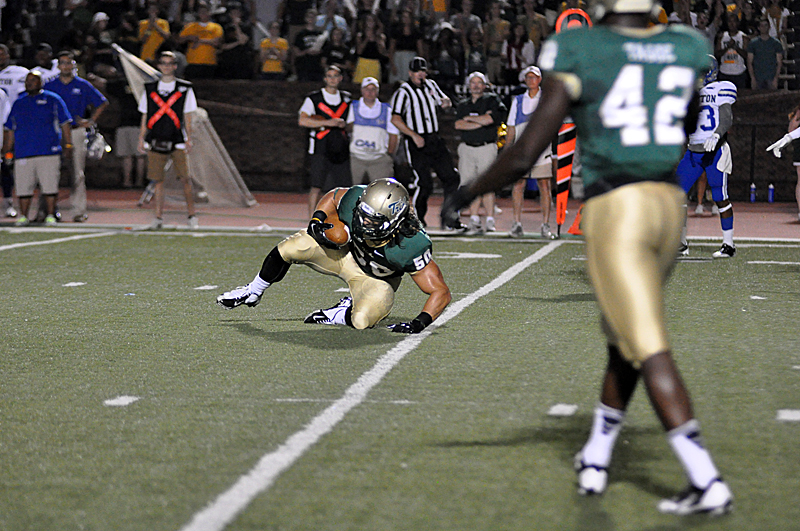 Saturday’s game featured so many victories that it’s easy to forget about the one negative. This was an early-season game, so it is difficult to know which is more telling.

Senior quarterback Michael Graham couldn’t capitalize on an excellent first-week performance, completing just 9 of 21 attempts for 106 yards Saturday night. William and Mary’s passing attack was dysfunctional for the majority of the game, most notably in the second half when Graham threw for a total of four yards. Some balls were under thrown, some were overthrown and some just landed with a lazy thud on the track — 10 yards outside the field.

True, it wasn’t all bad: Graham and his receivers connected on a few uplifting sequences, such as junior wide receiver Sean Ballard’s 41-yard touchdown reception in the first half. For the most part, however, Graham looked hesitant and unsure, especially when pushed out of the pocket and forced to throw on the run.

It’s yet another disturbing development in the College’s never-ending quarterback saga.  Graham, a week after playing so convincingly against a powerful Football Bowl Series defense, appeared lackadaisical against a far lesser opponent. It’s unknown whether head coach Jimmye Laycock’s decision to pull Graham for senior Brent Caprio in the closing minutes of the game was merely a ploy to give Caprio some playing time after coming back from a foot injury or if it was a vote of no-confidence for Graham.

Of course, this all took place in a game that the Tribe won 31-7. While the passing game was stunted, the College’s three-headed rushing attack of junior Keith McBride, sophomore Mikal Abdul-Saboor and freshman Kendell Anderson was busy tearing through the Hampton defense. Five-yard gains were taken at will all the way down the field — the Tribe’s running backs averaged 5.9 yards per carry and scored four touchdowns. Overall, the College notched 277 yards rushing with each of the three running backs garnering over 60 yards on the ground.

Much of the credit for the Tribe’s irrepressible rushing attack goes to the big guys up front who dominated the line of scrimmage and created space for the backs. Fifth-year seniors Matt Crisafi, James Johnson and Trevor Springman lead an offensive line that has played phenomenally well through the first two games of the season, giving up just one sack and paving the way for 379 total rushing yards.

However, the success of the College’s offensive line was far from a certainty coming into the season, as Crisafi, Johnson and Springman are joined by two redshirt freshman starters, Domenic Martinelli and Jerry Ugokwe. It’s been remarkable to see how the unit has overcome the inexperience of its two youngest members to catalyze the Tribe’s offense.

“I thought we did alright with protection and, honestly, the run game was working so well that at certain parts of the game we didn’t need to pass it,” said Springman. “So on the stats sheet it might look like it was a little slack, but I think the run game was able to make up for that.”

If possible, the superlatives were even more pronounced on the defensive side of the ball. Hampton didn’t come within 30 yards of the College’s end zone before its last-gasp touchdown in the waning minutes of the fourth quarter. It took three fourth-down conversions for the Pirates to finally capture a view from the Tribe’s end zone; but, by that point, the Tribe’s defense had already embarrassed Hampton’s offensive personnel.

Senior safety Jerome Couplin led the team with eight tackles, further adding to what could be an illustrious season. The Tribe’s defensive line reflected the dominance of the offensive line by controlling the line of scrimmage and snuffing out the Pirates’ rushing attack. The Hampton offense looked bewildered all game in the face of a surging defensive unit that gave nothing up easily.

Because there were so many great signs in the College’s home-opener, it seems cruel to harp on the one downside. But, after suffering through the miasma of last season, it’s hard not to be troubled by the continued uncertainty of the College’s quarterback situation. We don’t know how healthy Caprio and junior quarterback Raphael Ortiz are, but the Tribe can’t afford for Graham to be so spotty when Colonial Athletic Association play starts.

I get the feeling that this could be a very dangerous CAA team, if the Tribe could find consistency at quarterback.