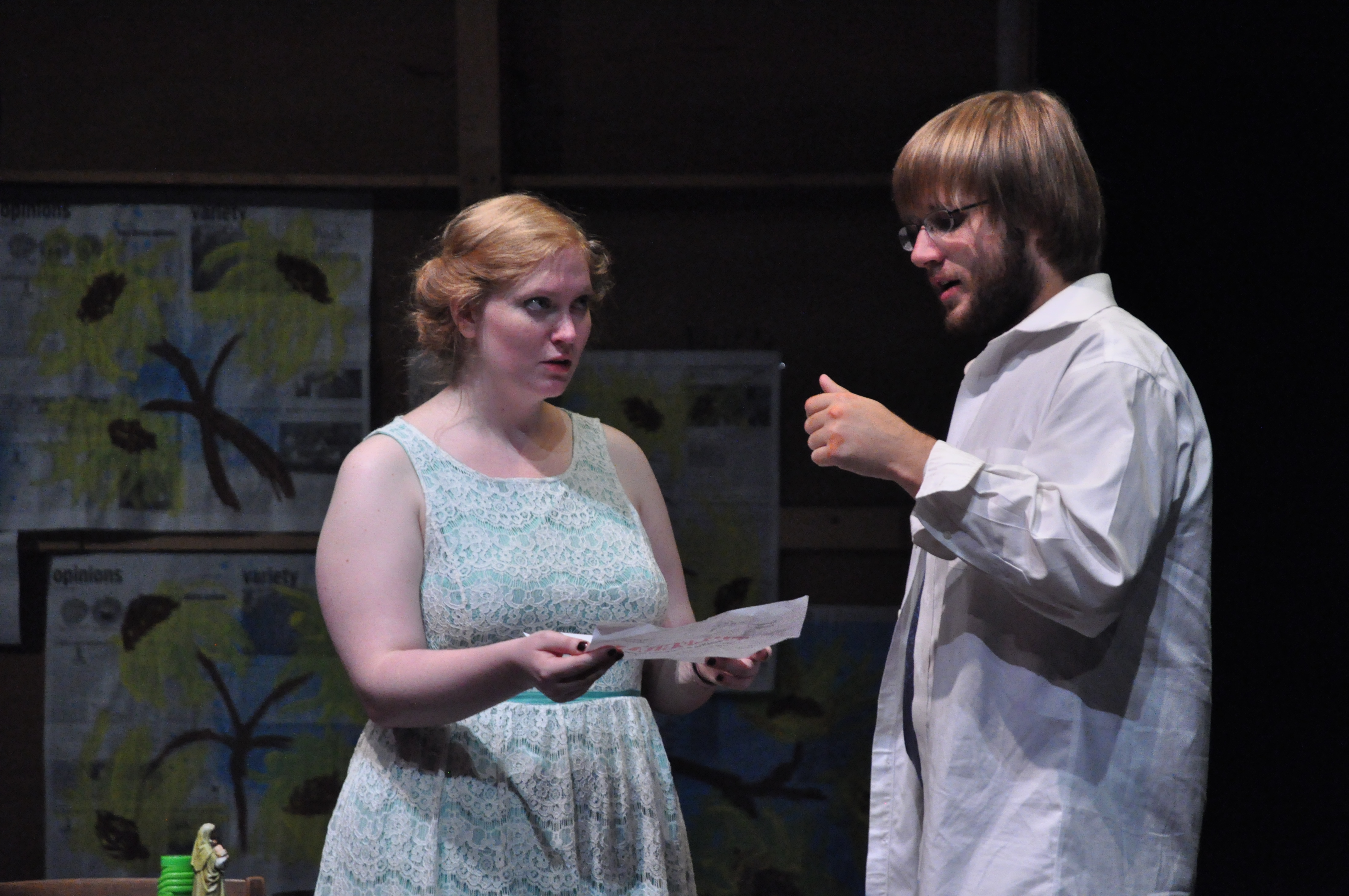 “To play with fear is to play with fire,” or is it much, much worse? This weekend the Studio Theater of Phi Beta Kappa Memorial Hall became a vortex of palpable emotion and delusion in “The Two Character Play.”

Written by Tennessee Williams in 1972, “The Two Character Play” is seldom performed, making it a unique challenge for student director Kelsey Schneider ’14.

After being abandoned by their theater troupe, sibling acting duo Felice, played by Robin Crigler ’14, and Clare, played by Taylor Schwabe ’15, struggle to come to terms with their desperate isolation and the violent deaths of their parents. Having to rely on each other, they soon realize that getting lost in the play may mean losing your mind.

Crigler and Schwabe tackled the complexities of the play with aplomb. They displayed extreme commitment to portraying multiple characters at once, as Felice and Clare try to distinguish between their own identities and those of their characters. Both actors worked well off each other’s energies to portray awkwardness, conflict and engaging character development.

Aside from a few dragging moments, their quick transitions between slow, halting conversation and fast-paced, climatic discords laced with passive aggressive and even comical subtext, served to further blur the lines between reality and insanity.

Crigler demonstrated a great range of ability as his character transformed from a nervous and agitated older brother desperately trying to shelter his sister from the harsh realities of the world, to a vehement force determined to expand her boundaries.

Schwabe exuded a strong identity as she broke free from the brother’s protectiveness and attempted to reach out into the world, only to be confined by her own fears. Her dynamism played well off her partner’s and added a great deal of intensity to the production.

The show’s technical maneuverings ran smoothly. Lighting designed by Sunny Vinsavich ’15 cast dynamic shadows across the stage and smooth transitions between onstage and offstage as well as interior and exterior lighting lent a sense of solidity to an otherwise confounding play.

Sound designed by Jess Hoover ’15 was clear and precise. A consistent audience murmur added to the show’s believability and helped to set the scene without causing distraction.

The set itself correlated to the atmosphere of the Studio Theater. Spartan set pieces did not detract from the complexity of the plot and allowed for maximum maneuverability of the actors, whilst scenic design by Cara Katrinak provided a nice balance of light and dark. The close proximity of the audience to the stage itself allowed Crigler and Schwabe to project dynamic facial expressions, body language and diction.

Makeup was appropriate for the close proximity of the theater while costumes designed by Madeline Dippold reflected both characters’ inherent personalities in relation to their frazzled and twisted states of mind.

“The Two Character Play” is a testament to the dominance of fear and confinement over the human psyche. The director, cast and crew undertook the intricacy of what is one of Tennessee Williams’s most beautiful plays with dedication and prowess. The magnitude of the performance was balanced by the relatable sentiment of a brother and sister who find strength in their familial bond to one another, but can only achieve solace if they manage to come to terms with their troubled past before their beloved theater becomes their tomb.