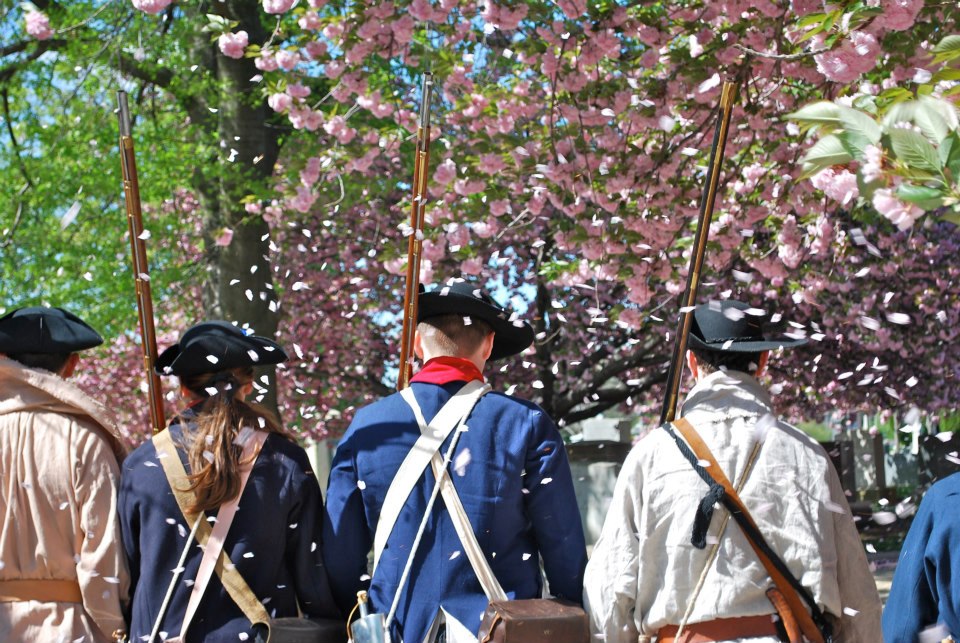 Don’t be alarmed by the people dressed like minutemen shooting off rifles every time the Tribe football team scores a touchdown. You don’t have to visit the Cheese Shop or go on a cider walk to see colonial re-enactors — just check out the College Company, a student club at the College of William and Mary.

Each member has a personal story about why he or she joined the Company: Some were recruited as freshmen during the annual student activities fair, while others discovered the club through jobs held at the nearby Jamestown settlement. For Jack Weaver ’17, it’s basically in his blood.

“My dad’s a re-enactor, and I just sort of got into it when I got older and I was able to come out to events with him,” Weaver said.

College Company members agree that they enjoy dressing in colonial attire and shooting muskets, but it isn’t just the clothes and arms that make the club unique. According to Daniel Sieh ’16, the best part of the club is the educational and social experience that re-enactment provides.

“I like the community aspect of it. We’re all very friendly to one another. There’s no, like, hierarchy. We all do what must be done and we don’t mind getting our hands dirty,” Sieh said. “We value history, but we’re not obnoxious about it. We like to help people, and we like to learn. You’re always learning something new.”

As members of the College Company, students are exposed to things they wouldn’t likely learn otherwise. They build forts, cook over open fires, and practice intricate colonial dances. Members are also trained to safely handle 18th century muskets. The 7th Virginia Regiment of the Continental Line acts as an effective parent group for the club, providing the students with loaner equipment, gunpowder and education in the proper handling and firing of a musket.

Training involves learning how to safely use black powder and studying the principle rules of gun safety, including always aiming the gun in a safe direction and keeping one’s finger off the trigger until ready to fire. Members of the College Company utilize this training when they re-enact around Virginia, especially at the College’s football games.

“It’s fun, but it can be a little bit stressful at times just because there are so many people in your general vicinity that you have to pay attention to,” Davis Tierney ’15 said. “We have to make sure that we’re firing in a direction where nobody’s gonna be in the way or get hurt or anything like that, so we always make sure we clear an area in front of us before we shoot. We also make sure that we use really fast burning gunpowder so no extra debris comes out the barrel that could conceivably hurt somebody.”

The College Company strives to maintain the authenticity of the era. To accomplish this, re-enactors have kits that include various types of clothing and weapons appropriate to the time period and the type of person they portray. These kits vary based on the specific character’s gender and rank in the army.

For women, costumes generally consist of a skirt, a petticoat, a shirt, kerchiefs and a mobcap. Especially enthusiastic re-enactors sometimes wear a hat, as well. The kits for men in line infantry include socks, knee breeches, an undershirt, a vest and a coat. Men not in line infantry wear an undershirt, a hunting shirt and a hat. Both sexes require period-appropriate shoes. If a re-enactor wears inappropriate shoes, he or she must wear batters to hide the historical inaccuracy.

Re-enacting is an expensive hobby. A pair of period-appropriate socks can cost up to $30 per pair. If one were to re-enact privately outside the College Company, clothing alone could cost up to $1,000 — not including weaponry.

“Since it’s a club, it’s great because if you were doing this on your own time you would have to buy pretty much all of it at once in order to be able to do anything, and that could run you up to $1,000 all at once,” Shannon Callinan ’16 said. “But here we have enough loaner equipment that we can [use to] get you outfitted and go to some events and you can use our clothing, and then meanwhile, if you get into it and decide you really do like it, you can buy your own clothing.”

Members don’t just perform at home football games; they also have the ability to participate in re-enactments around Williamsburg and the greater-Virginia area through the 7th Virginia Regiment of the Continental Line. The College Company will perform later this month, from Oct. 18-20. Called “Return of the Hook,” this re-enactment involves over 1,000 re-enactors and is open to the public. When asked what he enjoys most about participating in College Company, Tierney cites the ability to interact with such a diverse group.

“I really like that we get to introduce what is normally a prohibitive and expensive hobby to people who might not necessarily be able to do it otherwise,” Tierney said. “I normally wouldn’t really get to re-enact ever with people who are on a really low budget because they would never be able to afford to get into it in the first place. But, because of this club, we get to bring in people who can only afford to shell out 20 bucks, and that’s great; it allows us to interact with a wider variety of people [and] introduce people to this, and it allows them to see if they like it without putting in a huge capital investment to begin with.”