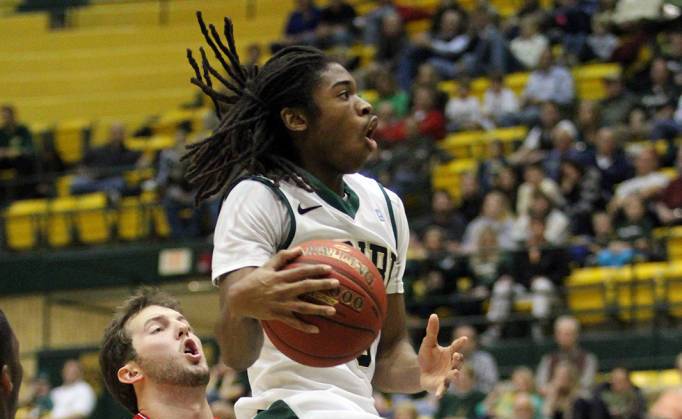 William and Mary used a late second-half run to win its home opener Tuesday night, racing to an 84-72 victory over Liberty University (1-1). The Tribe (1-1) shot 60.4 percent from the field and had four players in double figures, bouncing back from Friday’s season-opening loss.

“It feels great to get that first win, especially here at home. We had a good crowd here tonight, and our guys played well,” head coach Tony Shaver said. “I thought we had good performances from a lot of people.”

Junior guard Marcus Thornton led the team with a game-high 23 points, including 14 points in the Tribe’s 50-point second half. Senior center Tim Rusthoven and sophomore guard Terry Tarpey combined for 29 points and 12 rebounds, while hitting 14 of 15 shots.

The Tribe also got an exciting performance coming off the bench from freshman forward Omar Prewitt, who poured in 18 points while shooting 60 percent from the field. Prewitt, in his second career game, recorded six rebounds, four assists and two steals.

“[Prewitt] is a jewel,” Shaver said. “and he’s producing a little faster than even I thought … He’s very skilled, [and] has as good a feel for the game as anybody I’ve seen in a long time.”

Though it was a 12-point victory for the Tribe, the game featured more competitive play than the final score indicated. Liberty opened with a three-forward lineup to match the College’s three-guard set, effectively controlling the interior on both the offensive and defensive ends of the court.

The Flames used their size advantage to pull the College’s 2-3 zone into the paint, creating several open three-point looks. Liberty held a 30-24 lead with just over six minutes to play in the first half, appearing to have control of the game.

The Tribe responded with a more focused defensive effort and held the Flames without a basket on a 10-2 run closing out the first half. After struggling to find an offensive rhythm, Thornton nailed a three-pointer to tie the game at 32-32.

The Flames retook the lead early in the second half, as the two sides traded baskets for the first ten minutes. The College attacked the Flames’ defense more adeptly in the second half, stretching Liberty’s zone with perimeter shooting while Prewitt, Rusthoven and Tarpey exploited the vacant space in the paint. Still, with just under nine minutes to play, the game was tied 55-55.

Then the Tribe took over, scoring five layups in a five-minute stretch, forcing multiple turnovers and taking the pace to a level that appeared to overwhelm Liberty.

The resultant 14-2 run gave the College a 69-57 lead. While the offense began to click, Thornton noted the critical nature of the improved defense.

“When you get stops it’s really easy to play offense, and I think that’s what carried us,” Thornton said.

The Tribe maintained a healthy lead over the remaining four minutes of the game. Though Liberty cut the lead to 76-70 with 90 seconds remaining, Tarpey’s basket quickly restored an eight-point lead with a minute remaining, effectively sealing the win. After a series of free throws, the final whistle blew to complete an 84-72 Tribe win.

Overall, the Tribe adjusted to the Flames’ larger roster by relying on speed, a high-pressure defense and a strong shooting performance. Defensively, the Tribe held the Flames to 46.7 percent shooting, held a 30-28 edge in rebounding, and forced 14 turnovers. The Tribe committed just five shooting fouls in a clean defensive performance.

The Tribe returns to Kaplan Arena Wednesday. Tip-off against High Point is set for 7 p.m.