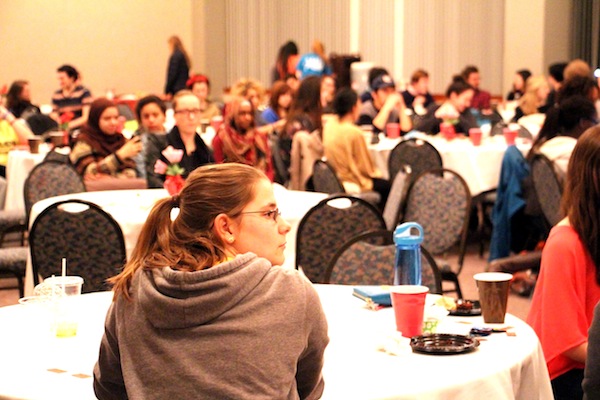 Rose petals, music and sugary love-related treats are all usual sights at a Valentine’s Day-themed event. The condoms spread over the white tablecloths were the first clue that this wasn’t your typical charity event — and, indeed, the UAID Valentine’s Day Benefit Concert proved unique.

Attendees trickled into Tidewater in the Sadler Center throughout the night, sitting at the round tables that filled the room and making a beeline to the back of the room for the variety of homemade snacks — all love-related, of course.

“It is great to see that the crowd is bigger than last year,” Mary Beth Case ’15 said.

The room throughout the night was humming. Some people were chatting with their friends, others were laughing at the slogans on the ONE condoms, while most just sat and soaked up the performances.

From singular guitar players to dance performances, the two-hour concert hosted a great range of performers.

“[It is] wonderful that they got such a diverse group of artists to perform for such a great cause,” she said.

The nine performances included musical acts from Three Four, Lili and Hannah, Charlotte Jones, Gold Connections and the Gentlemen of the College. The College of William and Mary’s Bhangra group, Swing Dance Club and Salsa Club all showed off their moves, and Micah Luedtke ’15 and William Plews-Ogan ’15 wowed the crowd with their spoken poetry.

“I’m really impressed with all the performers. Also, these desserts are so delicious,” Marika Emanuel ’15 said.

“It was such a successful event last year. My only goal was to beat what we did last year and install this event as a yearly thing, a permanent fixture on campus,” Martin said.

In addition to raising awareness around campus, UAID raises money for and works with the Eastern Virginia AIDS Network. EVAN is an organization that provides education and health services in the Hampton Roads area to prevent HIV. They also help to care for those who are already HIV positive.

“Last year we had an HIV testing event with EVAN. We try to facilitate support to the HIV/AIDS community in Williamsburg,” Martin said of UAID’s work with EVAN. In addition to the entertainment, representatives from both UAID and EVAN got up between performances to talk about their respective organizations.

Although the concert itself was free, those who made donations were entered into a raffle. The raffle prizes came from a wide variety of local businesses, including the Cheese Shop, the Crust and Sal’s, among many others. The money collected from this raffle will be donated to EVAN.

Several of the students in attendance donated money and supported UAID’s mission.

“I came tonight because I really like the organization. They do good work,” Zander Pellegrino ’15 said, making his way toward the homemade cake pops.

This attitude was one that many students seemed to share.

Molly Teague ’15, the UAID president, hopes that the concert will boost the club’s membership.

“It is a good way for [prospective members] to see first hand what we do,” Teague said.

This early Valentine’s Day celebration raised awareness, both about HIV/AIDS and UAID and EVAN on campus, and encouraged educated action with the raffle fundraiser for EVAN and free condoms.

“If just a handful of people that didn’t know their status are able to get tested, that will make all the work we do worth it. Any effect is better than doing nothing,” Teague said.