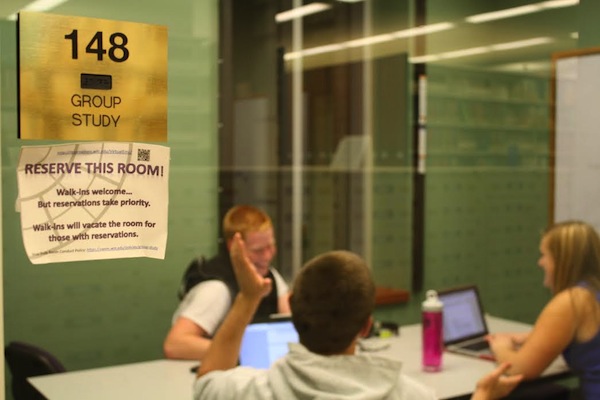 During the year, group study rooms are used most often from 2 p.m. to 11 p.m., according to Swem’s data. However, when Swem remains open all night during the final exam period, peak use of the study rooms occurs between 4 a.m. and 7 a.m. and from 11 a.m. to 11 p.m.

“Our group study rooms are always in higher demand immediately before and during final exams as students prepare for end-of-semester assignments,” Swem’s Associate Director of Strategic Communications and Outreach Tami Back said in an email.

It was the popularity of the group study rooms during finals that prompted Swem to change its reservation system two years ago.

“Two years ago we implemented a new reservation policy and electronic reservation system,” Back said. “Prior to that, group study rooms were first come, first served with no time limit on use. This led to students coming in early in the morning and camping out in a room all day or, in some cases, all week.”

Sydney Guo ’17 said that she hasn’t used the study rooms this semester.

“I normally don’t like to use the rooms because they’re not very quiet,” Guo said. “The people in rooms next to mine can be loud sometimes. I only used it about three times last semester.”

In addition to the group study rooms, Swem offers 16 individual study rooms. Back noted that students, as well as faculty without offices, can apply for these rooms each semester. Swem has also made efforts to facilitate the learning and studying processes by adding flat screen TVs, whiteboard paint and new furniture to many rooms, Back added.