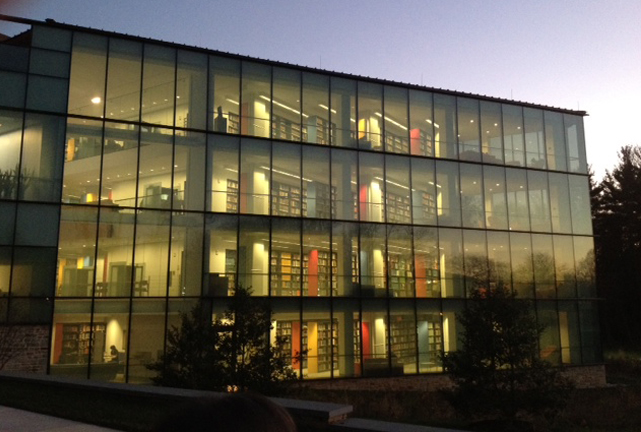 The promotional video begins with a Goucher College student holding up a piece of paper labeled “High School Transcript.” He proceeds to rip it in half. We then cut to a series of Goucher students engaged in what are presumably unique/quirky activities (e.g. ballet dancing, shooting free throws, gardening). The students look directly at the camera and say, “I’m more than just a number.” A proud day for Emersonian non-conformity, no doubt.

What the video is promoting is the fact that Goucher College has done away with test scores and transcripts as admissions factors. Instead, prospective students are now able to submit a two-minute video in which they explain who they are, and how they would fit in at Goucher.

This, coupled with a short application and two pieces of work from high school, are all that is needed for a Goucher application. Traditional applications still exist as an option for students who wish to use them.

The students featured in the promotional video aren’t wrong: They are, in fact, more than just numbers (they’re, you know, people). That being said, they have a whole lot of numbers attached to them. Numbers like how well they scored on the SAT critical reading section and the grade point average they accumulated over the course of four years of secondary education.

With apologies to the sunny individualists that Goucher’s marketing department could scrounge up, these numbers matter.

They matter so much, in fact, that for decades they have been the deciding factor in whether applicants are admitted to the college of their choice.

Of course, that sort of appeal to history would be silly if it weren’t for the fact that the traditional application process works. Students are adjudicated based on quantitative and verbal reasoning skills (which, very broadly defined, are the two most important skills needed for a college education). And for the Goucher people (Goucherites?) who are in favor of that more holistic tell-us-about-yourself approach, there’s the essay. Admittedly, admissions essays aren’t known for their exciting or edgy writing prompts, but they’re a reasonable way to gauge two important things that Goucher is seeking to gauge with its videos: identity and self-expression.

Despite being narrow in scope, the admissions essay is a college’s way of assessing an applicant’s identity, and whether she or he would be a good fit for the school. Maybe this is an apples and oranges sort of thing, but I’m hard-pressed to believe that a 650-word essay isn’t equivalent to a two-minute video. What can be said in one can just as easily be said in the other. Furthermore, the essay is an exercise in concision, which goes hand-in-hand with the second purpose of the admissions essay — self-expression.

Although Goucher insists that production value is not taken into consideration when judging an applicant’s video, there is a certain degree to which it must be, if only by dint of it being a video at all. The gardening student in the promotional video who insists he is more than a number — well, he’s gardening. His actions are speaking for him, and even though he’s following the old storytelling dictum of showing not telling, it’s this showing that is precisely problematic.

Because we’re still a verbal culture, and the power and importance of the spoken and written word have not yet been eclipsed by that of video. Not by a long shot.

By abandoning admissions essays, Goucher is disregarding one of the primary facets of intelligence: verbal self-representation. If I were unable to represent myself in words, I doubt that any college would want to accept me. But Goucher doesn’t care to meddle in trivialities like that. Why should it? It’s only the way we apply for jobs, engage with each other, and make friends. Silly stuff like that.

Goucher may have abandoned admissions tests, transcripts and admissions essays, but the College of William and Mary hasn’t.

Here’s to hoping it doesn’t.