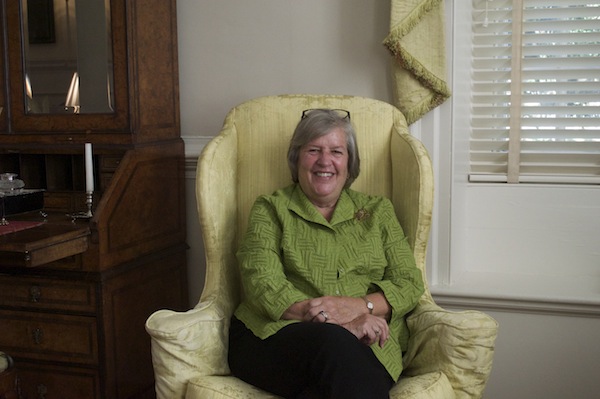 Three ghosts allegedly haunt the President’s House at the College of William and Mary: A skeleton trapped behind the plaster of a third-floor wall, a French soldier who stuck around after he died during the Revolutionary War when the house was being used as a hospital, and a maiden about whom not much is known.

To students at the College, though, there is a fourth ghost: someone everyone has heard of but few have seen. College President Taylor Reveley does not live in the haunted President’s House alone. He lives there with his wife Helen Bond Reveley, who, until this year, spent most of her time working at the St. Christopher School’s Richmond bookstore Since Helen Reveley left her job, she has begun to emerge from ghost-hood and is spending much more time at the College.

“It’s been great to have time to be here more often,” she said. “I’m going to some Christopher Wren Society lectures now, and I’m doing a lot of things. I’m going to lectures at the [Muscarelle] museum … We’ve been to soccer games and football games, and we’re doing lots of things, so it’s kind of fun. We’re seeing lots more students and that’s always great. Students are wonderful, so we really enjoy that.”

The Reveleys still have strong ties to Richmond, where one of their three children lives, but Helen Reveley’s roots stretch across Virginia and far beyond. She grew up in Lynchburg, where she went to public high school, and after graduating she took a gap year and sailed to Lugano, Switzerland to study.

Helen Reveley was only in Lugano for a year before returning to Virginia to major in history at Randolph Macon College, which was then a women’s college. During those four years, she met Taylor Reveley at a Christmas party. They continued to see each other during the holidays every year until Helen Reveley went back to Switzerland to teach for a year.

While in Switzerland, she traveled through Russia and the Eastern Bloc countries, and continued to stay in touch with Taylor Reveley. Since their marriage, the couple has traveled to South Africa, England, Spain and China, where they visited their daughter, who was teaching English at a university there.

With so many stamps in her passport, it seems fitting that Helen Reveley now resides at the College, which consistently ranks among the top public universities in terms of the percentage of students who study abroad.

“I think it’s wonderful that as many students travel as they do, or do programs abroad,” she said. “The world is such a tiny place now; it seems like everybody needs some exposure to some place other than the U.S.”

Helen Reveley’s love for history, especially American history, also makes the President’s House seem an apt home, as she walks the same floors as previous U.S. presidents. She said that the only change she and her husband have made since moving in was the addition of the grand piano in the living room, which, these days, Taylor Reveley generally only plays on very specific occasions.

“The only time Reveley plays the piano very often now … is when I’m late getting ready to go somewhere,” she said. “And rather than screaming, he’ll come down and play the piano and it just gets louder and louder. Actually, it’s a pretty nice way to tell me that I’m running late and I’d better speed up.”

The piano does not only serve as a tactful way to usher Helen Reveley out the door, though. She said students are welcome to come by and play, which some have done in the past. During the Reveleys’ first years in the house, a music student performing her senior recital was the first to use the piano. Since then, former College football player Jonathan Grimes ’12 has also serenaded the Reveleys on their piano.

The tradition of freshmen singing the alma mater on the lawn during orientation is probably the closest most students get to the President’s House during their time at the College, but Helen Reveley said she encourages people to stop by and say hello more frequently — and perhaps in smaller numbers, at a more reasonable hour of the day.

“Just knock on the door,” she said. “We’re usually here. We like to see people. A lot of people feel, ‘I know you’re really busy, we shouldn’t bother you at all.’ But we really do like the students to stop by.”