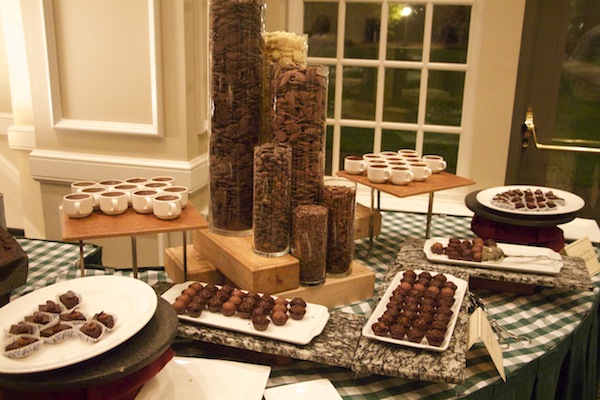 Chocolate is for lovers

“Chocolate is pure. It’s natural. It is what it is,” he said. “You can’t make it do what you want, but you can understand how it reacts.”

For a pastry chef, chocolate can be hard to predict and even harder to work with. But if you treat chocolate right — and Diehl nearly always does — you will be rewarded. The finished product, served ideally (in its solid form) at 85 degrees Fahrenheit, is a thing to behold.

“You should put the chocolate into your mouth and wait, let it sit there. You should wait until you can’t wait any longer. Let it heat up.”

The flavor, Diehl said, will explode in your mouth.

Held at the Williamsburg taste studio, this was the closing event of “400 Years of Chocolate: Aztec to Artisan,” a chocolate conference that lasted from Nov. 2 to Nov. 4 and drew guests from all over the country.

That there exists a Williamsburg taste studio — much less a local, world-renowned chocolatier or a national chocolate conference — might seem surprising. For students, the cacao-based event was all but unknown, lost in the background somewhere behind Halloween and the nation’s midterm elections. By all accounts, the conference, which cost $295 a ticket and lasted three days, was for adults.

Let’s talk about the choc’

As four school buses unloaded middle-school-aged children outside the Colonial Williamsburg Art Museum Monday, between 60 and 70 adults congregated in the Hennage auditorium on the inside of the museum. The children played on the grass eating delivery pizza, while inside the adults gathered to discuss and learn about America’s favorite sugary dessert food.

Howard-Yana Shapiro, a chocolate researcher and scientist who sports a long white beard and refers to himself as a “gene jockey,” kicked off the event.

Shapiro is most well known for his work in sequencing the cacao genome, a project he launched in 2008 and completed in 2010. Sequencing the genome and releasing it into the public domain was a “shock to the world,” Shapiro said, noting that within a minute of the genome’s release, West African farmers were already using the findings to improve their crop yields. In five years, Shapiro predicted, all cacao trees will be quality trees; in a dozen years, we will have healthful chocolate.

And then there are the humanitarian benefits.

“I was so mad at myself,” Shapiro said, speaking of the moment he learned that more than a third of children living in areas where cacao plants are grown suffer from malnutrition and stunted growth. Improving the quality of cacao beans through genetic modification, he said, could free up farmland to grow crops for local consumption.

Shapiro is cacao’s “gene jockey”, but he describes the Mars Company as chocolate’s “champion.” The company funded much of the research that uncovered the health benefits of flavonoids and other cacao compounds, as well as Shapiro’s sequencing of the cacao genome.

Mars also has ties to the Colonial Williamsburg Foundation. Forrest Mars Jr., one of the wealthiest men in the world, donated $15 million to Colonial Williamsburg between 2008 and 2010 and currently sits on its board of trustees. In addition, American Heritage chocolate, which was developed by a Williamsburg chocolatier and played a large role in the week’s conference, is a Mars Company product. A rumor spread around the convention that John Mars, one of three heirs to the $60 billion Mars fortune, has fond childhood memories of visiting Colonial Williamsburg.

So, who comes to a chocolate conference?

One attendee, Mary Elizabeth Dresser, attended the College of William and Mary in the late ’50s and early ’60s. She lives in College Station, Texas with her husband, who also graduated from the College.

Jane McKinney, another attendee, graduated from the College in 1985 with a Ph.D. in American studies. She wrote her dissertation on Marxist applications to salt production in the Caribbean, and for her research she visited cacao plantations. Several years after receiving her Ph. D., McKinney had an aneurysm and sustained brain damage. Unable to use her Ph.D., she became an interpreter in Colonial Williamsburg. However, McKinney’s interest in food production, specifically chocolate, endured.

Dale Schmitt and his wife Karen Hyder-Schmitt, both teachers from Johnsonville, Tenn., came to the conference because they enjoy attending conferences. Though they live almost 800 miles away, “400 Years of Chocolate” was, they said, their fifth or sixth conference in Colonial Williamsburg.

Attendees spoke of enjoying the lectures that took place during the day. But at times — during a tangent on rodent involvement in the cacao supply chain, for example, while Dresser could be seen sleeping quietly in a back row — it was clear that a powerful reason for attendance was meal time.

Chocolate is all you need

In addition to the truffles, another chef made chocolate French toast with a berry compote and white chocolate sauce; there was chocolate crème brûlée; cakes, cookies and other confections were spread throughout.

Diehl, who started baking at 14 years old, is an “expert’s expert” with an eye for detail and contrast. He claims to have once diagnosed a fever, gauging the temperature within a tenth of a degree through only a kiss on the forehead. His desserts show a comparable degree of precision.

While eating Diehl’s treats it was easy to forget that, for all the hype built around it, chocolate is merely a delicious food product. But for many attendees at the “400 Years of Chocolate,” chocolate is more than that.

Chocolate, to them, has the potential to bring people, even whole communities, together. Some see chocolate in the roots of American democracy, while others talked about its power to heal and improve mental health. For others, like Diehl, the love for chocolate is simple and pure — because it’s chocolate.