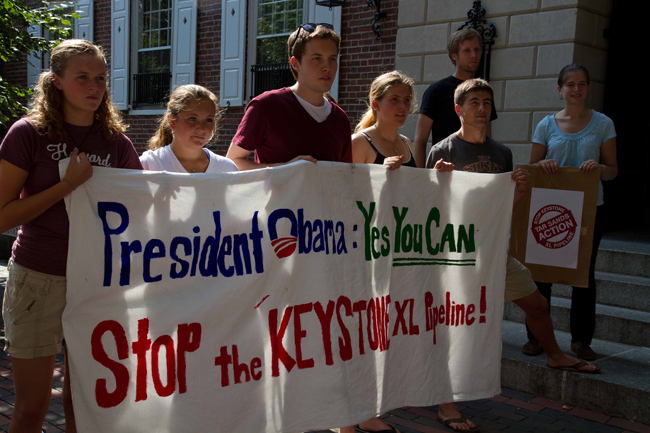 The Student Environmental Action Coalition spent Monday posting tweets, updating statuses, and signing petitions to call Senator Mark Warner out on his pro-Keystone XL pipeline stance. Although Warner voted in favor of the bill on Tuesday Nov. 18, the U.S. Senate rejected TransCanada’s Keystone XL Pipeline proposal by one vote. Had the bill passed, construction would have begun on the fourth part of the Keystone Pipeline Project spanning from Alberta, Canada to Steele City, Neb.

For many, Keystone looked beneficial for the country. This fourth phase of the project — the XL Pipeline — was predicted totransport 830,000 barrels of oil per day. That would have decreased reliance on Middle Eastern oil and would have promoted American energy independence. However, I challenge you to look beyond the TransCanada fact sheet.

The XL Pipeline would have transported Canadian tar sands — one of the dirtiest hydrocarbons in the market. Tar sand production requires clear cutting of forests to steam the grounds and extract the oil. This process creates an estimated 17 times the amount of greenhouse gases as U.S. production of conventional oil. After that messy business, tar sand processors must find the space to create artificial ponds for the “tailings” — the toxic water leftovers.

One might think that tar sands pollutant problems end at the border. The XL Pipeline, however, would have carried it over into U.S. territory and U.S. hands. First and foremost on many opponents’ minds was the threat of an oil spill. Our U.S. pipelines are made according to regulations for the transport of light crude oil. The XL Pipeline, however, would have transported diluted bitumen. This substance, known as “dilbit,” is the mixture of a lighter hydrocarbon, chemicals (including a known carcinogen) and bitumen — the heaviest crude oil today. Some studies show the transport of “dilbit” results in increased temperatures, pressures and corrosiveness of the pipelines, which indicates to me that more research needs to be done before it can be pumped through standard U.S. pipes.

Additionally, the results of a “dilbit” spill can be much more damaging than that of a conventional spill. Unlike a conventional spill, in which the oil floats on the surface of the water, in a dilbit spill, the lighter hydrocarbons evaporate and the heavier bitumen sinks – into nearby water sources. These spills are harder and much more expensive to clean up.

Another problem facing the oil industry is the lack of adequate monitoring technology. Pipeline managers rely on remote sensors to indicate the presence of leaks. Sensors take eight minutes to alert a pipe’s control center of what has happened. However, the fatal flaw is that this alarm detects changes in all oil flow and pressure; it goes off not only for leaks but also for bubbles in the oil, and it is not easy to decipher between the two. In the Kalamazoo incident, 16 alarms went off, but controllers assumed oil bubbles were causing the problem. They continued the flow of oil for an additional 17 hours after the leak began, before the leak was confirmed.

And these are the spills that are caught. According to a Pipeline and Hazardous Materials Safety Administration study between 2002-2012, monitoring technology only caught 5 percent of the nation’s spills.

This is more than an environmental problem. In Kalamazoo, Mi. in 2010., a pipe burst led to a dilbit spill. The Michigan Department of Community Health estimated that 58 percent of the residents living in vicinity experienced adverse health effects.

It’s easy to say that Enbridge Energy Partners are not the same as TransCanada, and therefore we should not be punishing TransCanada for their mistakes. This would be easy if TransCanada had a clean record, but unfortunately they don’t. Between June 2010 and September 2011, the first phase of the pipeline leaked 14 times.

Although the bill did not pass Tuesday, it could come around again in the next Congressional session with a Republican Senate. I am concerned about entering a new game without changing the old rules. We don’t have enough data, regulations or response mechanisms to give the go ahead to Keystone XL. This project should only pass when we are certain that public safety will not be compromised. We are not there yet.