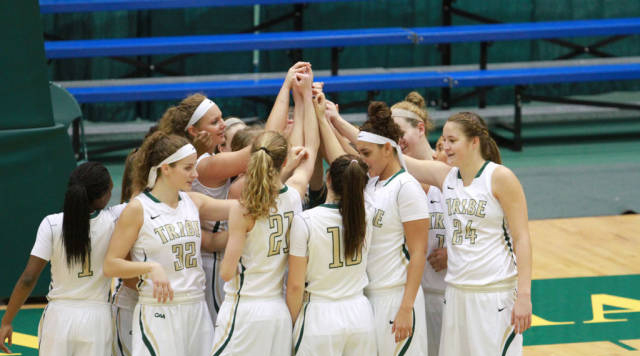 William and Mary earned an 81-71 win at Radford Tuesday in the 22nd meeting of the two Virginia programs. Radford leads the all-time series 15-7, but Tuesday’s win marks the Tribe’s second consecutive victory over the Highlanders.

The Highlanders were fresh off of a 68-67 victory against Appalachian State, while the Tribe entered the match following a commanding 90-55 win over Longwood. With Tuesday’s victory, the College improved to a 5-2 record.

The win, the Tribe’s third in a row, marks the first time since the 2008-09 season that the Tribe has won three consecutive games.

Radford took the lead early, posting a 12-7 advantage with 15:26 remaining in the first half. The Tribe caught up, tying the game at 19 apiece with nine minutes remaining. However, the Highlanders refused to let the Tribe gain an edge: Ayana Avery and Aisha Foy both made big contributions to secure a 35-28 Radford lead with 3:59 remaining.

As time ran out in the first half, senior forward Jazmen Boone hit a jumper and assisted freshman forward Jeanne Gaumont’s three-pointer to narrow Radford’s lead to 35-33. The Highlanders scored two free throws and added a lay-up to widen the gap, but the Tribe stayed strong and finished the half trailing by one point, 39-38.Radford took control of the second half much like in the first, using an 11-4 run to bring their lead to 50-42. The Tribe and the Highlanders traded runs for the next few minutes, but Radford maintained its lead throughout, posting a score of 57-47 with 11:36 remaining.

The Tribe then went on its biggest run of the game, scoring 14 points to Radford’s two in just over three minutes to bring the score to 63-59. This marked the first time the College led the Highlanders all night.

Radford made a valiant attempt to regain the lead but fell short. Sophomore guard Marlena Tremba scored five points in the last three minutes and added a steal and a turnover to seal the Tribe’s 81-71 victory.

Radford led the Tribe 34-24 in the paint. The Highlanders also outscored the Tribe 14-10 on rebounds and 7-6 on points scored off breakaways. However, the College scored 26 points off turnovers compared to Radford’s 13.

The Tribe faces La Salle in Philadelphia Saturday at 1 p.m. before taking a 12-day hiatus for exams.

Editor’s note: Senior guard Kyla Kerstetter was named an Allstate Good Works Team Nominee by the Women’s Basketball Coaches Assocaition (WBCA) and Allstate Wednesday morning. 54 National Collegiate Athletic Association athletes were named, including two from the Colonial Athletic Association.  “We are very proud of the work that Kyla puts in on the court, in the classroom, and in the community,” head coach Ed Swanson told Tribe Athletics. “As a staff, we are fortunate to have a player like Kyla to be a great ambassador for our program. She has received recognition in all three facets locally, and we are glad to see her accomplishments noticed on a national level.”