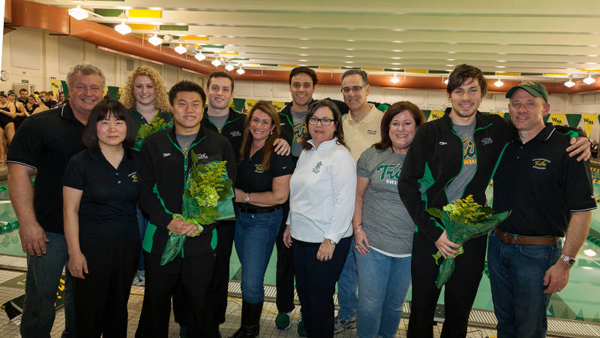 Even for a campus as entrenched in history as William and Mary, Saturday was unique.

To add to the accolades, the meet marked head coach Matt Crispino’s ’02 100th career win. Crispino joins Dudley Jensen (170) as the second Tribe swimming coach with more than 100 wins. Dudley coached for 33 years; Crispino will enter his ninth next season.

The women fell to East Carolina, 150.5-111.5, marking the second consecutive 7-4 year. While history stole headlines, the performances in the pool merited attention of their own.

The men and women both celebrated the senior class. Seniors Chris Dong, Taegan Clarke, Matt Goetz and Carter Head enjoyed a 25-12 four-year run, the best since 1973. Seniors Liz Collins, Megan Howard and Greta Schneider combined for 28 wins. Combined, the senior class finishes with a 53-32 all-time record, tops since the 1975 class.

The Tribe returns to action at the University of North Carolina for the UNC College Cup next weekend.