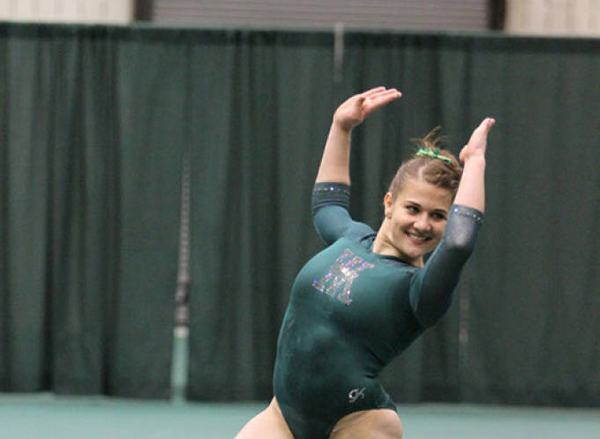 William and Mary came up just a few points short in a gymnastics quad meet Saturday in Raleigh, N.C. finishing fourth of four.

With 192.125 points, the College finished just behind third-place and host North Carolina at 194.05 in a tightly contested meet. N.C. State took second by a razor-thin margin at 194.50 points, while West Virginia carried the day with 195.30. None of the teams are ranked nationally, but the event drew a crowd of 3,700 fans.

Junior Brittany Stover led the College’s performances for the day, tying for second in all-around points with 39.125. Stover also tied for second in the pole vault with a score of 9.875. She launched herself into the school records with the performance, as each score tied for third-highest in Tribe history in their respective categories.

Not to be outdone by her younger sister, senior Brandy Stover scored a dazzling season-high 9.8 on beam, joined by Brittany and sophomore Olivia O’Connor with exceptionally strong performances of 9.725 and 9.7, respectively. It was the College’s best showing on beam of the season, as the Tribe scored a total of 48.30.

With 192.125 points, the College finished just behind third-place and host North Carolina at 194.05 in a tightly contested meet. N.C. State took second by a razor-thin margin at 194.50 points, while West Virginia carried the day with 195.30.

However, even the College’s best effort wasn’t quite enough in the face of stiff competition, as all three teams hit higher marks on beam. The Mountaineers and NC State tied at 48.6, with North Carolina right on their heels at 48.575.

The Tribe excelled on the floor as well, as the team registered a 48.4 mark in the ground game. Seniors Maggie Lundeen and Brittany Stover spearheaded the effort with 9.8 marks apiece. The 48.4 score beat the Tar Heels’ mark, but fell short of WVU’s 49.025 and NC State’s 48.7 effort.

The bars event determined the College’s fate in the contest, as the Tribe scored a 47.875, nearly a full point lower than NC State’s third-place performance of 48.625. The event also stopped NC State from defeating in-state rival UNC, as the Wolf Pack led the Tarheels both on beam and on the floor, but trailed in this single category to lose by .45 of a point.

The vault also hurt the Tribe’s chances, as the College’s 47.550 mark dipped 1.3 points beneath the two-way tie for second between NC State and UNC Brittany Stover again displayed her versatility with an impressive 9.875 tally on the vault, complemented by graduate student Larson Lasek’s strong showing of 9.725. Both competed as all-arounders in the individual standings, along with O’Connor.

The Tribe will attempt to rebound from the fourth place finish in a rematch against the University of North Carolina Saturday at 1 p.m. in Williamsburg, Va. The College will look to protect its floor advantage against the Tarheels, but will likely need to demonstrate significant improvement in bars and vault to take the victory.