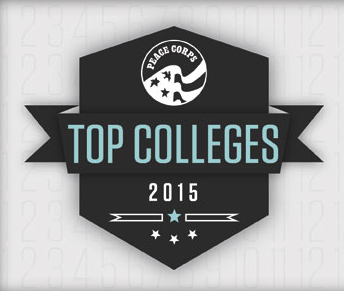 The Peace Corps recently ranked the College of William and Mary twelfth among medium-sized schools for number of volunteers produced; the College has 21 alumni currently volunteering worldwide.

“The Peace Corps provides an indispensable opportunity for young people out of college to put their unique skills to work making a difference for communities around the world,” Peace Corps Director Carrie Hessler-Radelet said. “Volunteers make lasting change by living and working at the grassroots level in their communities of service and using their talents to tackle some of the most critical challenges in international development.”

Prior to 2015, the College saw a decline in its rank, following 11 straight years of placement in the top ten. This year marks the first positive movement in the College’s ranking since the downward slide began. 2015 includes four more volunteers from the College than the school had last year.

Some attribute the rise in volunteer numbers at the College to the change in the Peace Corps’ application process, which was recently streamlined to be more efficient and less time-consuming for the applicant.

“The process wasn’t bad at all,” Aaron Ng ’15 said. “In July, they completely changed the process, made it shorter, and made it easier. The new application was streamlined. The new application’s purpose was to increase applicants and volunteers. It might encourage more people at William and Mary to apply.”

Ng will be leaving to teach secondary English with the Peace Corps in Moldova this June.

However, while the new application process has likely had some effect on the new ranking, others attribute the College’s rise in rank to the caliber of students at the College.

“I think that here at William and Mary there are a lot of people who are very driven who feel that, before they really settle down for a job, they want to go out into the world and have these experiences,” On-Campus Peace Corps Ambassador for the College Maria Loverde ’15 said. “They want to acquire these skills that the Peace Corps can help you acquire and then come back to America and really start their careers. A lot of students saw and recognized that and went for it.”

Loverde will be teaching secondary English with the Peace Corps in China this June.