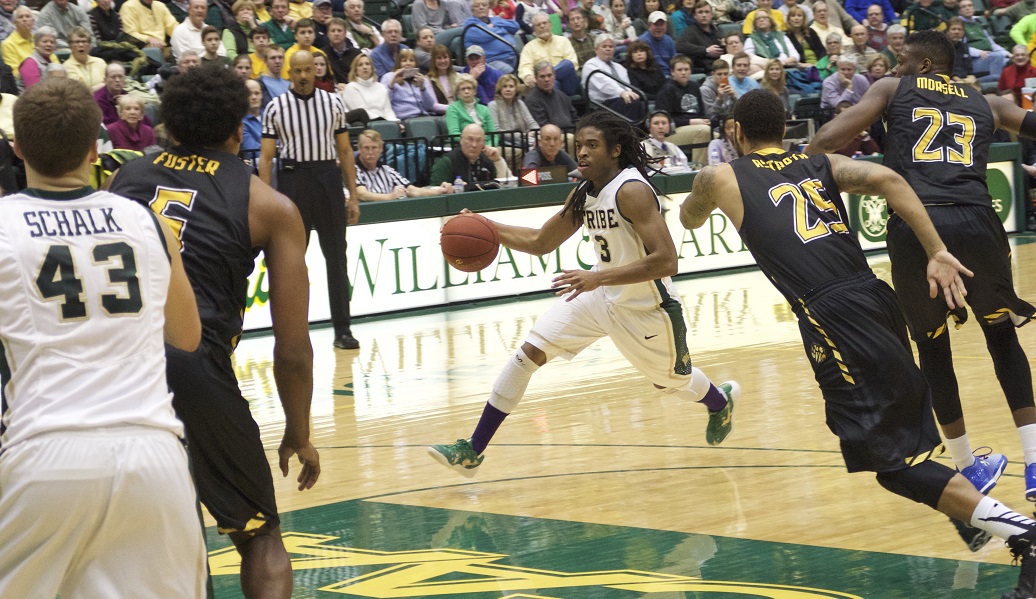 Senior guard Marcus Thornton stood at the foul line in Kaplan Arena with three seconds in the first half. The crowd of 3,200 fell silent as the shot went up, then exploded into cheers as the shot went in. The free throws moved Thornton to first place in all-time scoring, highlighting William and Mary’s 65-50 win over Towson Wednesday.

The Tribe dominated Towson in the paint in the first half, outscoring the Tigers 12-6. Thornton was key to the first half effort, putting up 15 points to surpass Chet Giermak ’50 and break the longest standing National Collegiate Athletic Association Division I college scoring record, which had stood for 65 years.

“I don’t think I approached it in a special way, my focus is the same it’s been all year. … I play so my team does well, try to be a good leader, and try to play good defense.” Thornton said. “It was pretty normal for me, obviously I was excited, but I was glad to have a good game.”

Thornton was key to the first half effort, putting up 15 points to surpass Chet Giermak ’50 and break the longest standing National Collegiate Athletic Association Division I college scoring record, which had stood for 65 years.

The Tribe’s defensive effort kept the Tigers from scoring anything other than free throws for 17 straight minutes in the first half. The College’s defense was tight on Towson, forcing the Tigers to take risky shots. As a result, Towson hit five of 33 shots and one of 15 three-pointers. Entering halftime, the College led 28-15.

As the second half began, the Tribe continued its strong defensive effort to bring the total time without a Towson field goal to 19 minutes. With 17 minutes, 58 seconds remaining, Towson ended its drought. Tarpey then made back-to-back shots from behind the arc, putting the College ahead 37-18 with 15:44 to go in the second half. Tarpey’s points were part of a 12-5 run by the Tribe that established a solid 20-point advantage over the visiting Tigers with 13 minutes to play.

Towson then began a comeback bid, shrinking its deficit to as few as five points. After a basket by Tarpey broke the Tigers’ run and a quick exchange of timeouts by both teams, Towson’s Mike Morsell fouled Thornton twice, allowing the College to take a comfortable 51-38 advantage. The fierce competition continued as Towson continued to cut the Tribe’s lead.

“We stopped playing hard. … We got that 20-point lead and it became very easy to score on us,” head coach Tony Shaver said. “Maybe I didn’t do a good job substituting, but some of those guys it’s hard to take off the floor. And, let’s be honest, [Towson] started making shots.”

Towson shot 50 percent in the second half, hitting 12 of 24 shots. Overall, the defense kept Towson 17 for 57 overall and five for 25 on threes.Conversely, the Tribe’s offense was 23 for 49 on field goals with 30 points coming from the paint.

“I’ve never coached a player who impacts the game in so many ways,” Shaver said. “[Tarpey]’s one of our best defenders, he’s scoring the ball well right now, he’s our best rebounder, he had five blocks tonight, three assists, he just does it all, and his energy may be important above all in these things.”

With the victory, the Tribe remains in first place in the Colonial Athletic Association. At press time, the College is tied with UNC-Wilmington in the standings.

The College plays its final game of the regular season at Kaplan Arena Saturday, facing Drexel at 2 p.m. The post-season CAA Tournament is scheduled for March 6-9 while the College has its spring break.