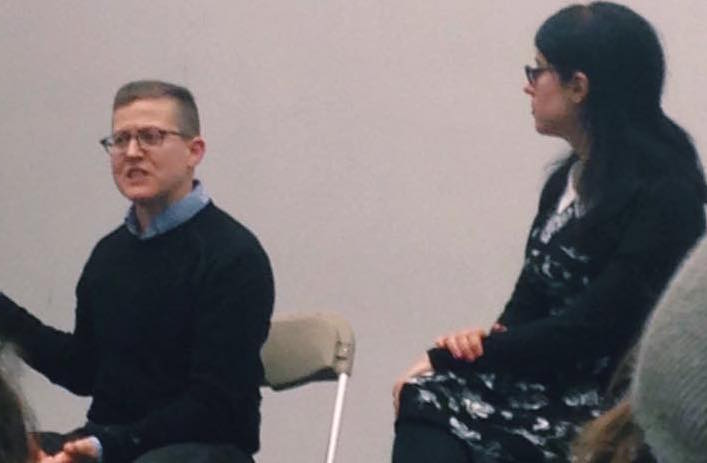 Every year, the gender, sexuality and women’s studies department hosts a lecture in memory of Minnie Braithwaite, the first woman who attempted to attend classes at the College of William and Mary in 1896, 22 years before women were formally admitted in 1918.

Summers began the lecture by discussing what appealed to her about writing “Pregnant Butch,” a graphic novel. She said that she felt that the idea of queer pregnancy is ignored in mainstream literature.

“One is not accustomed to seeing a lot of visual representation of oneself,” Summers said. “[But it is] a very visual identity.”

According to Summers, graphic storytelling enables artists to depict the complexity of the gendered self and the seemingly incongruous identities of “butchness,” lesbian and pregnant.

Audience member Sarah Stefan ’15 is part of the one-credit “Queer Comics” class at the College. She said she enjoyed the lecture, the class and the meeting with the authors. Stefan emphasized the importance of representation.

“They had come in and spoken to a few of us, so I was primed and ready for it,” Stefan said. “I was really excited about seeing lesbian identities portrayed and meeting these women. [The event] served its purpose [of marking the Minnie Braithwaite Anniversary] well, but I was expecting a theme of feminism. Maybe the focus was more on the queer aspect of that, [and] I think it served more of an LGBTQ purpose, [which fits] the [GSWS] department.”

Stefan also said she found it interesting to learn about the method behind making graphic novels. Georges referred to the process as a “cross between an art form and a trade.”

“I’ve been reading graphic novels forever, but I’ve never thought about the process, the hours and days of isolation and drawing,” Stefan said.

Associate professor of English and women’s studies Jennifer Putzi teaches “Queer Comics” and was the director of the lecture event.

“This is my first year as director, and I wanted to do something that no director would have chosen before,” Putzi said. “I’m a comic book nut, and I think they work really well with students.”

“People can do really interesting things with race and gender and sexuality in comic books,” Putzi said. “[‘Pregnant Butch’ and ‘Calling Dr. Laura’] are both lesbian graphic memoirs, but they don’t represent lesbian experience as being one single thing.”

“I didn’t feel like all of the people I met were dragging their feet, and I think they were exposed to something they may not have been exposed to ordinarily,” Stefan said.

Putzi discussed the future of the Braithwaite Lectures.

“We have a year to plan … to figure out who we want, and what we want the speaker to do for the intro classes and for the department,” Putzi said. “I don’t want to duplicate exactly what we did, but I’d like to think about a speaker who has that kind of broad appeal. It’s good for the program and for visibility, because it does represent the kind of work we do.”