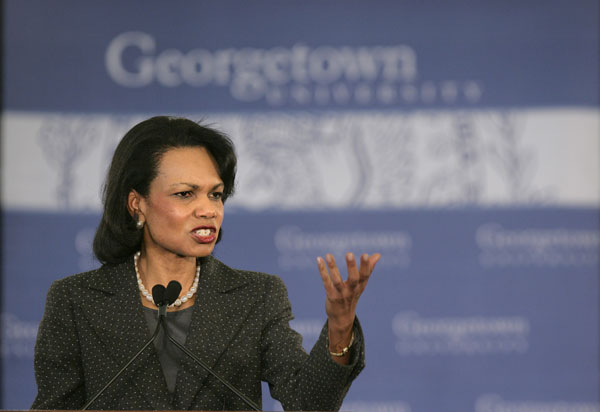 March 3, the College of William and Mary announced that the class of 2015’s commencement speaker will be former Secretary of State Condoleezza Rice. Outside of a few murmurs of discontent, the student body’s general reaction appeared to be mild excitement over landing such a high-profile speaker.

Indeed, it has been several years since the College has brought a speaker with such an accomplished political legacy. But there is another legacy that hangs over her whole career: the Iraq War, which began 12 years ago on March 20.

Rice was instrumental in convincing Congress and the American public that the Iraq War was necessary. On Sept. 8, 2002, Condoleezza Rice stated in an interview on CNN that the Iraqi government possessed aluminum tubes that “are only really suited for nuclear weapons programs” and famously declared that “we don’t want the smoking gun to be a mushroom cloud.” Yet according to The New York Times almost a year before that interview, “Ms. Rice’s staff had been told that the government’s foremost nuclear experts seriously doubted that the tubes were for nuclear weapons.” Perhaps factual accuracy was never the purpose of Rice’s media campaign: when a deputy raised concerns about the accuracy of Rice’s claims, Rice told the deputy, “Save your breath. The president has already made up his mind.” To this day, investigators have failed to find evidence of an Iraqi nuclear weapons program.

In addition, in 2003 The Guardian reported that Condoleezza Rice used her position as National Security Advisor to personally request that the National Security Agency wiretap members of the United Nations Security Council. According to an internal NSA memo, the purpose of the surveillance was to “give U.S. policymakers an edge in obtaining results favorable to U.S. goals or to head off surprises.” The event caused an international scandal, but Rice never stopped believing that it was the correct course of action; in a 2005 interview with Wolf Blitzer, she defended the decision as a necessary part of President Bush “using his constitutional authority to protect the country.”

As we know, the United States ultimately went to war in Iraq. A Brown University study estimates that the Iraq War has cost the United States over $2 trillion; counting interest, the cost could grow to $6 trillion over the next several decades. More tragically, a 2013 study published in the academic journal PLoS Medicine estimates that the Iraq War caused almost 500,000 deaths due to violence, population displacement and health infrastructure issues; the majority of those killed were civilians. Countless more have suffered post-traumatic stress disorder, severe injuries or forced migration. Yet 12 years after the start of the war, Iraq does not have a well-functioning democratic government, over a quarter of Iraq’s population lives in poverty, Iraqi citizens do not have reliable access to electricity or clean water, and the region is less stable than before the war began.

There will be some who say that Rice’s speech will not be political and that we should not concern ourselves with her political legacy. Indeed, there is some truth to this claim. Rice’s commencement speech will undoubtedly skirt controversy and stick to the motivational platitudes characteristic of the topic. And I hope she is not prevented from giving her speech, as she was at Rutgers University. Rice has every right to speak, and we can learn quite a lot by reflecting on her legacy as a public official.

But Condoleezza Rice is coming to the College because of her political career. As a public official, Rice made concrete decisions that had real effects on real people’s lives. If we ignore this fact and suspend all judgement due to some vague sense of awe over an individual’s power and political accomplishments, we do not deserve to consider ourselves members of a vibrant democratic society.

Ultimately, history will judge the consequences of the decisions Condoleezza Rice made while in office. Will we?