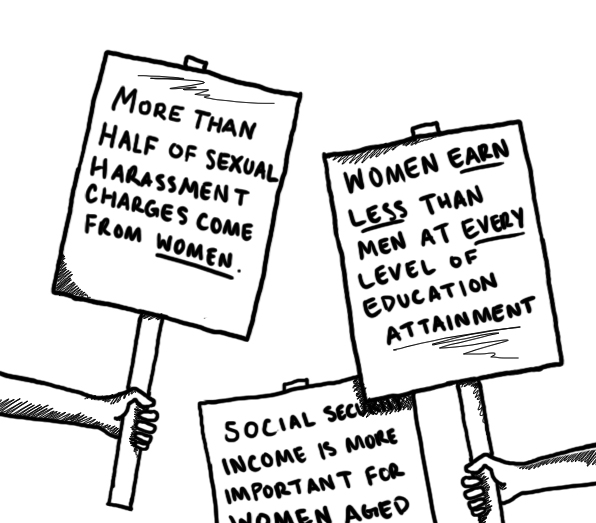 Take a cursory glance at any social media platform and you’re just a click away from an article titled something like, “Women still make 77 cents to the man’s dollar” or “Gender wage discrimination: Women make 23 percent less than men.” From Hollywood to the White House to Williamsburg, 77 cents to the dollar is a firmly entrenched statistic.

But there’s a slight issue.

Simply put, this statistic is misleading. Yet it has become widely accepted as common knowledge. It was cited in the 2013 State of the Union, popped up in internet memes and online articles and, yes, made its way to the College of William and Mary. The wage gap has shown up in classes (hopefully not introduced by any professors) and sometimes within our own feminist groups such as Wait, That’s Not Funny.

So why is 77 cents to the dollar misleading?

The statistic was found by taking the median of all men’s jobs and dividing it by the median of all women’s jobs without any distinction whatsoever between professions. It is definitely illegal for a company to pay a female employee 23 percent less than her male coworker simply based solely on their genders: “equal work for equal pay” has been law since 1963, thanks to the aptly named “Equal Pay Act.” The law explicitly addresses the fact that women and men working in jobs requiring similar skills, effort and responsibility should be paid the same amount.

The statistic also implies that the wage disparity it claims is somehow guaranteed. One must question theis logic: after all, if women were always paid 23 cents less than their male coworkers, why would any business bother hiring a man?

Comparisons such as male petroleum engineers making $120,000 annually averaged against female teachers with early education degrees earning $37,000 lead to a serious over exaggeration of the wage gap between the sexes. Some have countered that society values women-dominated professions more, but it’s not unreasonable to suspect that an aerospace engineer major (88 percent male) will likely make more than a visual or performing arts major (77 percent female).

The College’s student body is clearly passionate about women’s rights, as evidenced by groups such as VOX Planned Parenthood, Wait, That’s Not Funny, Hope and Someone You Know. Besides the fact that the 77 cents statistic is based on intellectually bankrupt assumptions, continued usage of the figure has the potential to damage the feminist movement and all the work that these groups have done by giving people a reason to distrust and write off feminism. Of course that’s unfair, but why hand a cynic ammunition to use against you? What if someone disbelieved campus rape statistics from a feminist group because they lost trust in feminism due to misleading wage statistics?

There are legitimate, important questions that need to be answered. Why do women make up majorities in lower-paying professions? It’s not an easy inquiry and is harder to put forward than a simple bogus statistic. Some point to the cultural socialization of women as passive and domestic. How do we fix that culture? How do we change the fact women are four times less likely to negotiate for pay than a man? I don’t know the answers, and I hope the feminist movement can provide them. But we as a community need to stop using 77 cents to the dollar. Feminism is about real problems and it deserves real statistics.